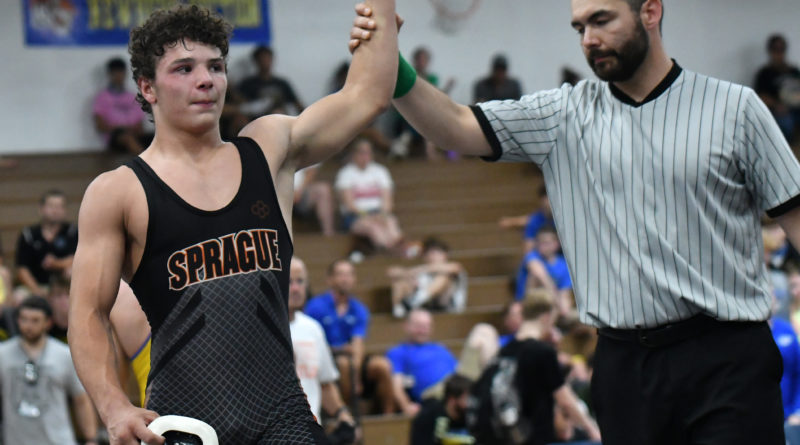 A year ago at the Class 6A wrestling championships at Memorial Coliseum, Sprague’s Riley Davis ran into a buzzsaw in the 138-pound final named Angel Sanchez.

The Westview senior and transfer from Florida capped an undefeated season last February with a 9-3 decision over Davis.

At that time, Davis thought he’d have three more chances to win a state title, but when COVID-19 hit, the possibility loomed that one of those chances might get snatched away.

“It was definitely frustrating,” Davis said. “But I tried to do everything I could, wrestling whenever I could, to make sure I was ready if the season did come.”

Finally, the powers-that-be approved a high school wrestling season, and Davis made the most of it, defeating Newberg’s Price Pothier 9-2 in the 160 final at Saturday’s Oregon Wrestling Association 6A State Championships in Newberg.

The win finally erased the lingering bad taste of that defeat 16 long months ago.

“That was a really big motivator,” Davis said. “I wasn’t going to let what happened to me last year happen again. I was definitely hungry to win, and here I am. I know I worked hard for this, but it doesn’t stop here. I want to keep winning.”

Oakland junior Kaleb Oliver completed a second consecutive undefeated season by pinning Elgin’s Joseph Lathrop with six seconds left in the second period of the 2A/1A final in Sweet Home. Oliver, who transferred from Boulder, Colo., in the summer of 2019, is 60-0 in two years with the Oakers. … Willamina junior Michael Fox finally won his first state title after losing in the finals each of the past two years. Fox pinned Vale’s Ronnie Norton in 2:40 in the 3A final in Redmond. … Thurston senior Manuel Monroy returned to the top of the podium at the 5A meet in Cottage Grove. The 2019 champion at 138, who did not wrestle at state last year, pinned Crescent Valley’s Tyson Resko with 16 seconds left in their final. It was the second year in a row Resko lost in the final to a Thurston wrestler (he lost to Asher Ruchti in 2020).