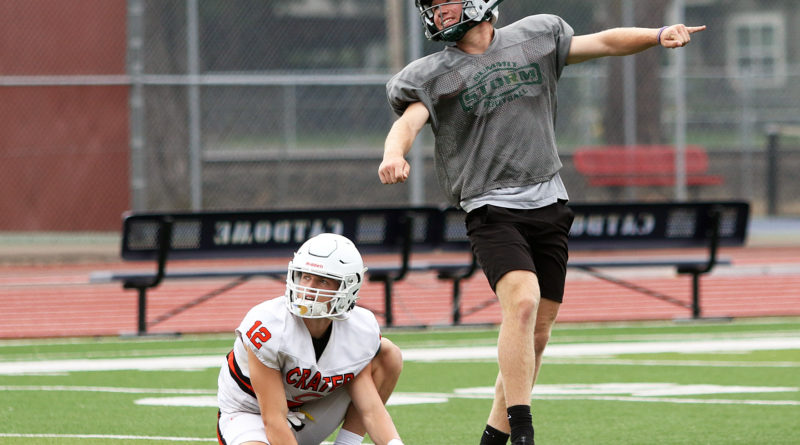 Happenstance can be a good thing.

It certainly worked out well for Soren McKee and for the Summit High School football team.

It also could end up paying dividends for the South squad Saturday during the Les Schwab Bowl football all-star game at Linfield University in McMinnville.

It was happenstance that led McKee, a Summit senior-to-be and longtime soccer player, to give kicking a football a try — and he’s never looked back.

“I was a soccer player my whole life. That helped a lot, for sure,” McKee said during a South team practice Wednesday. “One day, I was out at my high school playing soccer, and this kid came up to me, and he said he played soccer and football at the same time, and he was the kicker. I thought that was really cool, so I just showed up to football practice one day and said, ‘I want to be the kicker.’ Two weeks later, my coach (Corben Hyatt) told me that if I wanted the spot, I had it.”

McKee now has another spot, handling the kicking and punting duties for the South squad in Saturday’s game.

“Oh, it means a lot,” McKee said of being chosen for the contest. “I put a lot of hard work into this. I’m really trying to be the best kicker I can be, and it’s really nice to be recognized and see that my hard work has paid off.”

All of that hard work certainly seemed to pay off for McKee during his junior football season at Summit. For the season, McKee made 100 percent of his extra-point attempts. All 16 of his kickoffs went for touchbacks, and he went 5 for 7 in field goals, including a school-record 50-yarder in an April 2 home game against Bend.

“I was just hitting really well in warm-ups, and my coach noticed, so I was just feeling really good about myself,” McKee said of his 50-yard field goal. “He put me out there, and it’s nice to know that he trusts me with that in a game, and I was able to put it through. That felt really good.”

“It’s fun to compete against some of the best kickers in the country and see where you rank,” McKee said.

“It’s something kind of fun I can do,” McKee said of kicking. “I’m just happy when I do it.”

He’s already looking ahead to plenty of good times with the Summit team in the fall.

“I’m just going to focus on helping my team out,” McKee said. “I just want to do whatever I can to help get us some wins, and have fun, too.”

But first for McKee, who is joined on the South team by his Summit teammate, defensive lineman Jackson Bailey, is Saturday’s Les Schwab Bowl.

“It’s a big thing to have fun, get better and make some good memories,” McKee said. “But at the end of the day, we’re out here to win. Hopefully we can pull it off.”