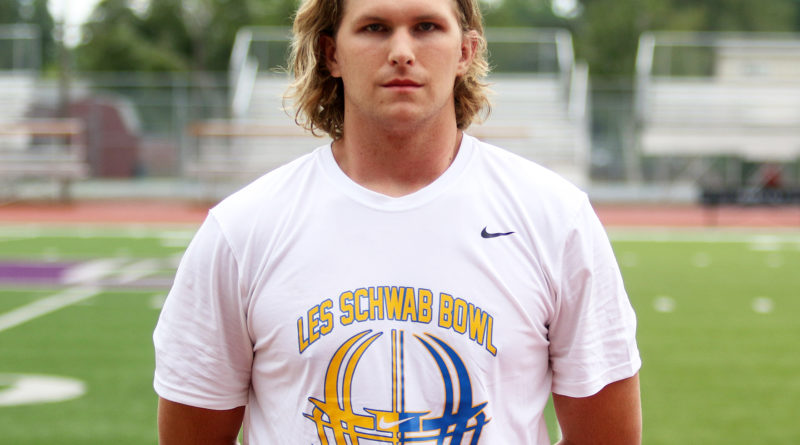 Kaanan Huffman won’t be lacking inspiration or motivation when he takes the field for Saturday’s Les Schwab Bowl.

Huffman, a 2021 West Linn High School graduate, will be looking to continue a family legacy in addition to representing the Lions program when he plays for the North team during the all-star football game that will be held at Linfield University in McMinnville.

“It means a lot to me,” the 6-foot-4, 230-pound Huffman said following a North team practice Wednesday. “My dad (Will Huffman) played in this game during his high school career, so this has been my goal ever since my freshman year. I wanted to play in this game and continue with what my dad did, and I’m so excited to play on Saturday.”

While Kaanan Huffman is representing West Linn at the Les Schwab Bowl, his dad played in the all-star tilt as a Barlow graduate. But the two still share a common bond for the game.

“It’s funny, because Coach (John) Beck (an assistant coach for the North) coached my dad, too. So, he’s coached two generations of Huffmans, which I think is so sick,” Kaanan Huffman said with a smile. “There’s a great atmosphere here, too. There are a lot of guys I played against throughout the season. Now, I get to see them again, but as my teammates. I don’t want to be anywhere else. I love it here.”

Huffman, who will be playing on the defensive line for the North team Saturday, is coming off an outstanding senior season at West Linn. He was a unanimous all-Three Rivers League selection as a defensive end, and he was an honorable mention pick at tight end, as he helped the Lions go 6-0 while winning each game by at least 20 points.

“It was pretty amazing. Having (head coach Chris) Miller come back definitely made us all a little happy,” said Huffman, who will play college football at Central Washington University. “We all knew his game plan, and we all knew his goal was to go 6-0 and dominate everybody. He and Coach (Anthony) Newman brought a great game plan, both offensively and defensively. It was good, because our goal was to go undefeated and dominate every team, and, at the end of the year, we did that.”

While there was no Class 6A state championship during the delayed and shortened 2021 spring season, West Linn sure seemed to stake its claim as being the top team in the state.

“We like to look at ourselves that way, but we also wanted that one more game against Sunset (which also went 6-0),” Huffman said. “It’s fun to talk with those guys about who is the real state champ, but Sunset is another great team, and if we have to share the light with them, I’m honored to do that as well.”

While Sunset has five players suiting up for the North team, Huffman is the only Lion playing in Saturday’s game.

“That’s one thing that my coach told me, is that I’m going to be the only West Linn kid out here, so to definitely rep the name well,” Huffman said. “We definitely have a high standard. My coaches texted me, saying that they’re going to be watching on Saturday, and to make everyone proud back home, so that’s what I plan to do. There’s a little pressure, but I look at it more as an honor. I was chosen for a reason, I’m out here for a reason, now let’s go make something happen.”

And, of course, after a 6-0 season at West Linn, Huffman wants one more victory.

This year’s Les Schwab Bowl includes many of the top players from around the state, including some underclassmen, as well as a couple of players from southwest Washington. This is the 73rd game in the North-South series, with the series tied at 34-34-4.