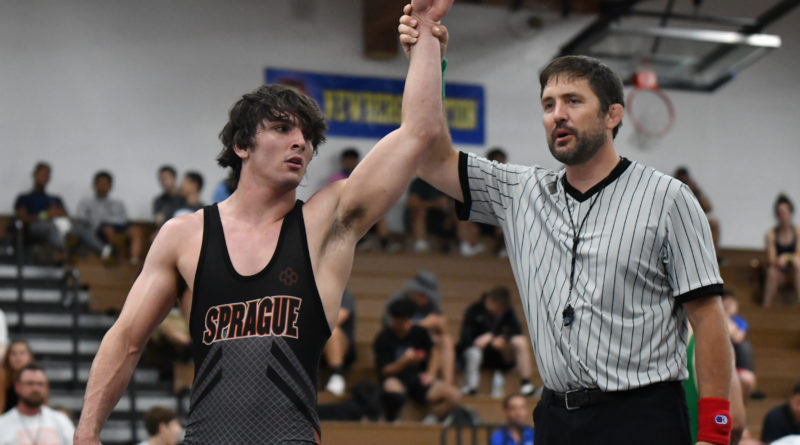 Brook Byers wasn’t looking to set any marks when the Sprague junior took the mat in the 182-pound final at Saturday’s Oregon Wrestling Association 6A State Championships at Newberg High School.

All he had on his mind was finding a way to add a second state title to the 160 crown he won last February at Memorial Coliseum.

But when he saw his opportunity to pin Mountain Valley rival Gavin Harris of McKay in the third round of their title match, he seized it, recording the fall in 4:52 to become the only wrestler in the tournament to win all five of his matches by fall.

Byers was almost as dominant last year in winning the title as a sophomore. He won his first two matches in 2020 by technical fall, pinned his quarterfinal opponent and recorded major decisions in his final two matches.

“I was more prepared for last year, but I came out confident in both tournaments,” said Byers, who was on the mat for a combined 11 minutes, 29 seconds, in his five victories. “This one’s unique, though, so it’s uniquely special, I guess.”

Crescent Valley junior James Rowley moved within one victory of becoming a four-time state champion, winning a matchup of returning title-winners against Thurston senior Asher Ruchti at the 5A championships in Cottage Grove. The score was tied 1-1 after regulation, and after a scoreless first overtime period, Ruchti recorded an escape in the second overtime. Rowley countered with a reversal with 20 seconds left in the third overtime to secure the 3-2 win and a third title. Rowley now heads to Budapest, Hungary, where he will compete at the Cadet World Championships this month. … Tillamook senior Miquel Niemi, third at 160 in 2019 and runner-up at 170 last year, finally won a title at the 4A meet at Cascade, pinning Madras’ Reece White in 1:04.