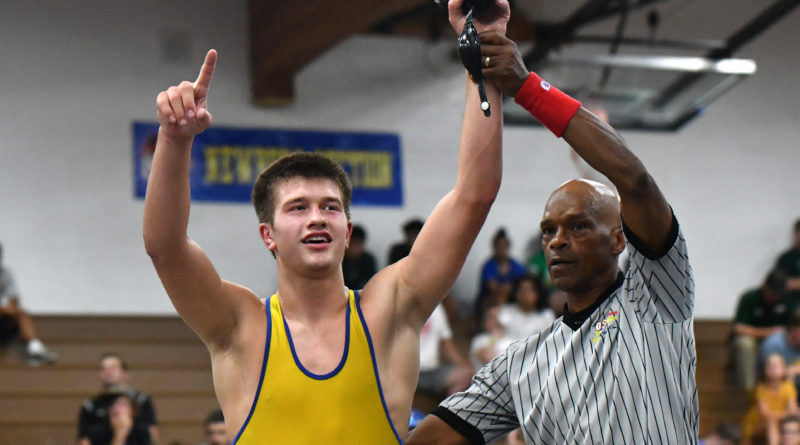 It’s been a whirlwind past three months for Newberg athletes such as junior Charlie Evans.

It started with football season, when the Tigers opened the season by ending a six-game losing streak to Highway 99W rival Sherwood and went 5-0 before losing to West Linn in the culminating week.

After a short break, it was right back into the gym for Evans, who hoped he’d get a chance to repeat as a state wrestling champion after winning the 132-pound title as a sophomore.

Even while Oregon remained shut down because of the COVID-19 pandemic, Evans found ways to hone his skills on the mat. In November, he headed to Des Moines, Iowa, and won the 152 title at the USA Wrestling Brian Keck Memorial Preseason Nationals, beating Montana Class AA state champion Drake Rhodes in the final.

And Saturday evening at the Oregon Wrestling Association 6A State Championships at Newberg High School, he won that second consecutive state title with a 15-4 major decision over Century’s William Musser.

“A great way to finish the year and go into the summer,” said Evans, who recorded six takedowns and a reversal in improving to 12-1 at state tournaments, his only loss coming as a freshman to three-time champion Philip Kue of Centennial in the 132 final.

“With football and everything, having a great year there, and then to come into wrestling, finishing like this, it’s crazy. It’s great. I love it.”

Could a third wrestler in the Lamer family one day join the four-time state champion club? Sophomore Daschle Lamer won his second title Saturday at the 5A meet in Cottage Grove, beating Thurston’s Hunter Harwood 10-0 in the final. … Sweet Home senior Tristan Spencer moved from the bottom of the medals podium to the top, following a sixth-place finish at the 2020 state meet with a 4A title at Cascade, pinning Junction City’s Carson Henderson in 1:12 in the final. … While Culver won its seventh 2A/1A title in the past eight years Saturday in Sweet Home, the Bulldogs took home only one individual title — senior Anthony Hood’s 10-4 victory over Enterprise’s Trace Evans.