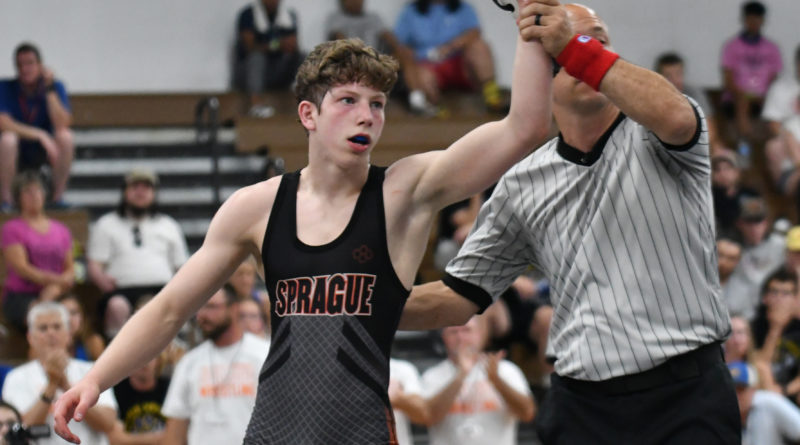 Sixteen months ago, Sprague’s Brayden Boyd and Sherwood’s Ethan Ritchie met in the 106-pound final of the Class 6A state tournament at Memorial Coliseum.

Boyd won that match 13-7, but so much had changed over the ensuing months — not the least of which being the worldwide pandemic that wreaked havoc on the 2021 high school wrestling season.

Both moved from 106 to 120 pounds, and Ritchie moved seven miles down Highway 99W to join Newberg’s powerhouse program.

There were the two of them Saturday evening, however, at the Oregon Wrestling Association 6A State Championships at Newberg High School, standing across from each other yet again with a state title on the line.

And once again, it was Boyd who had his hand raised in victory following the match. The Olympians junior recorded four takedowns over the six minutes to none for Ritchie in a 9-3 decision.

“It’s not in the same place, and it feels different, but it feels good,” Boyd said. “He’s improved a lot, and I knew he’d be tough. I wrestled him during the summer, and I knew in the back of my mind that I could work him, and that I might have been in his head.”

Another championship rematch took place in the 5A final in Cottage Grove, where Crescent Valley sophomore DJ Gillett again got the better of Crook County junior Tucker Bonner, this time with a 15-2 major decision. … Amity senior Blake Runion moved from 113 to 120 to win his second state title, besting Burns junior Ethan Peasley in a 12-3 major decision at the 3A meet in Redmond. … Imbler junior Garrett Burns accomplished the same feat at the 2A/1A meet in Sweet Home, moving up from 113 and winning a second state title with a 6-2 victory over Central Linn’s Blake Owens.