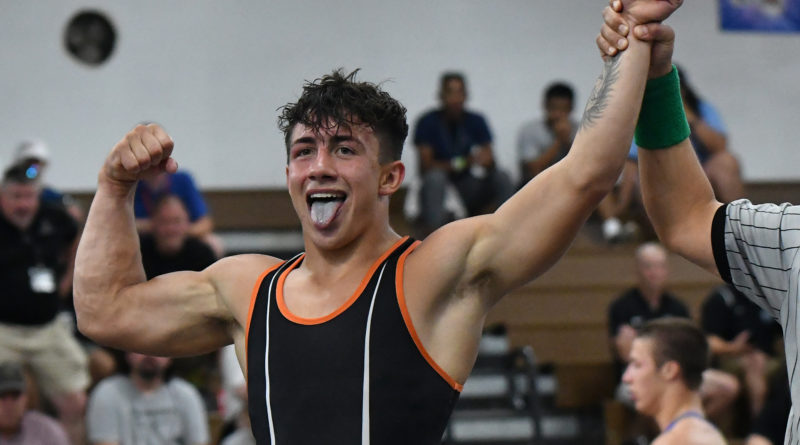 Four years of blood, sweat and toil flowed as tears as Roseburg senior Kahleb Diaz made his way from his corner to find his family amidst the Roseburg contingent on the far end of the Newberg High gym.

Diaz had finished fourth, third and second in his first three trips to the Class 6A state meet. Finally, in his last trip, he could call himself a state champion after edging Newberg senior Micah Worthington 2-1 in Saturday’s 138-pound final at the Oregon Wrestling Association 6A State Championships.

After a scoreless first period, Diaz received a point for a technical violation and then earned an escape for a 2-0 lead after two rounds. Worthington, who also was looking to avenge a 2020 loss in the final, quickly escaped to open the third period, but Diaz fended him off the rest of the way before leaping into his coach’s waiting arms when the final whistle blew.

“Honestly, the words for it would be grit, determined,” Diaz said. “I’m dedicated to this sport. I love it with all my heart, and I’m just glad I got to spend this year with my teammates and my family.”

Diaz, like so many others wrestling Saturday, had feared he would not have a senior season to cap his high school career, which made his final victory that much sweeter.

“I didn’t think we were going to have a season, but we did, and thank you to Newberg that we have this state tournament today,” said the Umpqua Community College signee. “I’m just thankful.”

Another 2020 runner-up who found redemption Saturday was Dayton junior Tony Cisneros, who fell in the 3A 126 final last year. He came back to win the 3A title in Redmond with a second-round pin of Pleasant Hill’s Jackson O’Connor. … Two returning titlists repeated as champions, with Crescent Valley senior Hunter Eveland eking out a 6-5 decision over St. Helens senior Tristan Buchanan in the 5A final in Cottage Grove, while at the 4A meet at Cascade, La Grande junior Braden Carson pinned Stayton’s Eli Howard in 3:15.