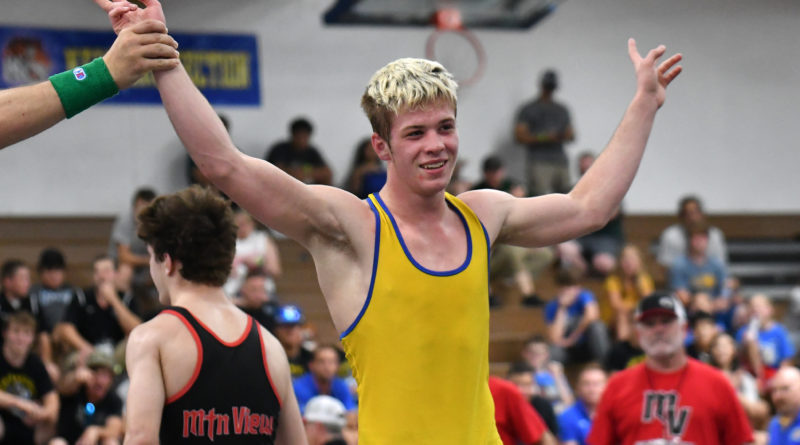 Newberg junior Nicky Olmstead had experienced life on both ends of the medals podium during his high school career.

As a freshman, Olmstead won five matches — all by pin — to earn the Class 6A state title at 106 pounds. Last year, his shot at becoming a four-time state champion came to an end because of the flu.

He gutted out two matches to reach the semifinals and secure valuable team points in the Tigers’ state title run, but he went to the hospital dehydrated after his 5-4 quarterfinal win over Josef Miner of Grants Pass and ended up placing sixth.

“My first year, I’d stood on top of that podium, and standing on the bottom doesn’t feel so good,” Olmstead recalled. “I had to get it done this year.”

And get it done he did, holding off Mountain View sophomore Drew Jones 6-4 to win the 126 title at the Oregon Wrestling Association 6A State Championships at Newberg High School.

Jones, though, escaped midway through the round and took Olmstead down with five seconds left, but he couldn’t get Olmstead’s shoulders turned for the necessary near-fall points to force overtime.

“It was really unfortunate what happened last year,” Olmstead said. “It took a lot of hard work, but I’m back. It feels good to be back on top.”

Yamhill-Carlton senior Reily Leisegang knocked off two-time champion Moses Mercier of Willamina 2-1 in the 3A final at Redmond. Leisegang, who fell in the 106 final as a sophomore, became the first Yamhill-Carlton wrestler since 1999 to win a state title (classmate Ethan Russell later joined him by winning at 285). … Stayton junior Mauro Michel became a three-time state champion by pinning Banks junior Dylan Smith one minute into the 4A final at Cascade. Michel wrestled for Cascade his first two seasons before transferring to Stayton. … Crescent Valley junior Gabe Whisenhunt also is one from joining the four-time champions club, beating Kagen Lawrence of Redmond for the second consecutive year, this time by an 8-2 score in the 5A final at Cottage Grove.