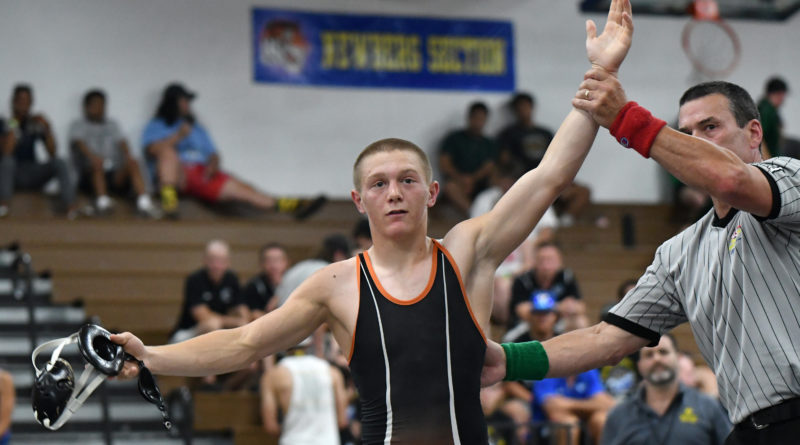 Did that put any extra pressure on Nash as he stepped on the mat to face West Linn’s Ethan Goff in the 132-pound final with a second career title on the line?

Unlike last year, when Singleton went the distance to avenge a final loss his freshman year to win his first title, he made quick work of Saturday’s final opponent, needing just 71 seconds to record a pin.

It was the quickest finish of any of the 14 state championship matches at Newberg, and it left Nash and Gage tied with the same number of pins this season.

“He had one more pin than me, so I had to pin that guy to make up for the pin he got earlier,” Nash said. “It was a little extra motivation.”

It also marked the first time the brothers won state titles in the same year at any age group, and it capped a season that Nash said was harder than his previous championship.

“Teams were a little bit smaller this year, and things got narrowed down to the best guys real quick because that’s all that was left,” he said. “Only the good guys stuck around.”

Two other repeat champions were crowned at 132 pounds. Reedsport junior Aaron Solomon moved from 106 to 132 and beat Glide’s Dennak Towne 11-4 at the 2A/1A meet in Sweet Home, and Junction City senior Evan Potter defeated La Grande sophomore Joshua Collins 8-4 to win the 4A title in Sweet Home. Collins also reached the 113 final as a freshman, where he lost to now three-time champion Mauro Michel of Stayton. … Crook County sophomore Cash Wells won his final match for the second year in a row. Last year, it was for third place at 113 pounds. This time, he defeated St. Helens junior Narcizo Garza 10-2 to win the 5A title in Cottage Grove. … La Pine junior Dylan Mann, runner-up at 3A 120 last year, pinned Scio’s Hunter Zeiher with 25 seconds left in the first period to win the title in Redmond.