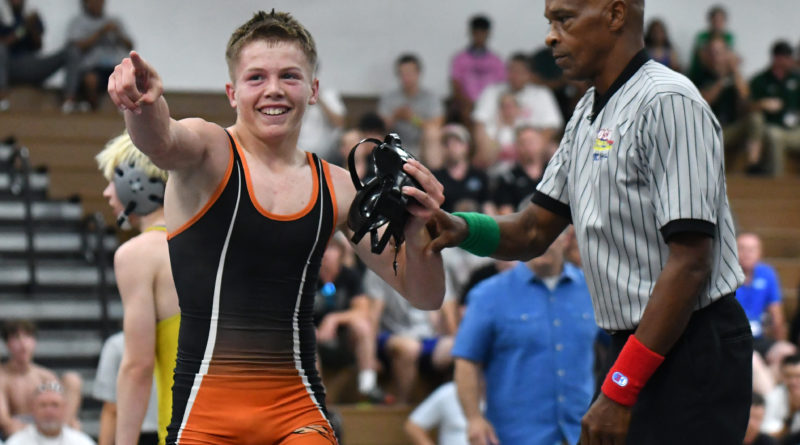 Gage Singleton had been coming to the state wrestling championships the past two years to watch his older brother, Nash, wrestle for the storied Roseburg program.

He watched as Nash lost a close final in sudden-victory overtime to Newberg’s Ayden Garver as a freshman two years ago in the Class 6A 113-pound final, then returned to Memorial Coliseum a year later to earn the 120 title as a sophomore.

Like any younger brother, Gage not only looks up to Nash, he also wants to best him. So, when Gage found himself in the 106-pound final Saturday evening against Newberg’s Isaac Hampton at the Oregon Wrestling Association 6A State Championships at Newberg High School, the Roseburg freshman saw his opportunity.

“He lost his freshman year to Ayden, so I figured if I win this year, I can be better than him one day,” Gage said.

Singleton entered the final as the No. 7 seed, having knocked off No. 2 seed Sean Lee of Cleveland in the quarterfinals and third-seeded Scout Santos of Mountain View in the semifinals. Hampton was the top seed, but the Roseburg wrestler took heart that they’d wrestled numerous times at youth competitions — although none in the past two seasons.

“Isaac is a really tough opponent,” Singleton said. “Me and him have wrestled all our lives. He’s a great opponent, great competition.”

And they put on a good show for the fans spread out on both sides of the Newberg gym. Singleton took the lead with an early takedown, but Hampton recorded an escape with 40 seconds left in the first period and another midway through the second to tie the score at 2-2.

When Singleton chose the down position to start the third period, Hampton opted to give up the escape point immediately to not waste time seeking a potential title-winning takedown.

Instead, it was Singleton who recorded the decisive takedown, and despite Hampton escaping with 15 seconds left, Singleton held on for a 5-3 decision.

Freshmen won four of the five state titles contested Saturday at 106 pounds. La Pine sophomore Tyson Flack, who missed a state berth by one match last winter, was the only non-freshman to come through in the lightest weight class, defeating Rainier’s Hunter Hendricks 5-0 in the 3A final in Redmond. … Illinois Valley’s Michael Miller became his school’s first state-champion wrestler in the past decade with a 48-second pin of Culver’s Aiden Guest at the 2A/1A meet in Sweet Home.