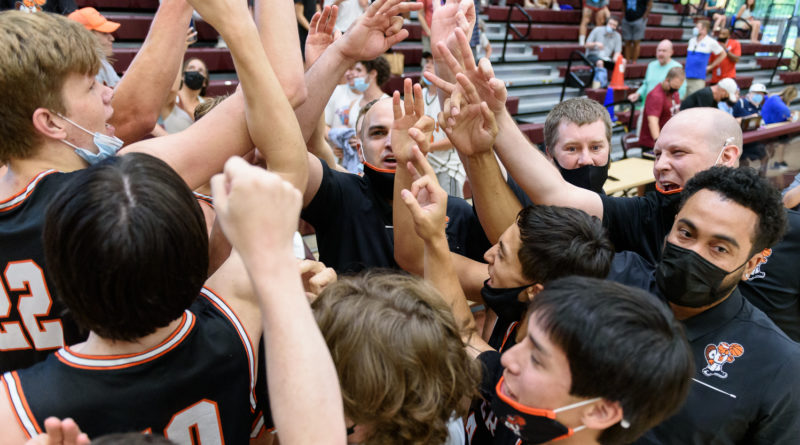 Beaverton held off Grant’s furious attempt at a comeback, securing a 40-37 victory to claim the bracket title.

Grant, held to nine first-half points, had two three-point attempts in the final seconds in an effort to tie.

Nothing dropped for the Generals, setting off a celebration by the Beavers.

“For this season, we weren’t really supposed to … be amazing,” said sophomore Brady Rice, who scored half of his team’s points, including 13 in the second half. “But we came out, we won our league, and we were a little bit on fire, and we took out these other teams. Pretty cool.”

Dane Erikstrup added 13 points and was a defensive force, as usual, for the Beavers. The 6-10 post disrupted Grant’s offense for much of the night.

“To be honest, this means everything. I came back from Arizona for this purpose,” Erikstrup said.

He had moved to Arizona but returned to Beaverton for this abbreviated basketball season.

“I’m happy for my guys. They did it all. I have to thank the team, and I’m glad we came out with the win,” he said.

“All year, we’ve been a defensive team,” Erikstrup said. “It was our game plan to keep them to single digits in the first quarter.”

That is why Grant coach Robert Key was genuinely happy at the end of the game. After scoring just nine points in a half, his players kept battling. Beaverton did not score in the final 3:22.

After the Generals forced a turnover, Andre Lawrence scored with 43 seconds left to make it 40-35. Grant got another turnover on the inbound, and Adrian Mosley converted to make it 40-37.

Another turnover on the inbound gave the Generals the ball with 22 seconds remaining. Two missed three-point attempts ended the rally, but still, that fourth quarter impressed Key.

“That was probably the best varsity basketball game, to come from a deficit that it was at the beginning of the game,” Key said. “The resilience of these kids to play like Grant basketball … I tip my hat to these guys. They never quit.

“I leave this gym just as proud as a coach as I’ve always been with these guys. I’ve got their back, and they’ve got mine. It shows. We’ve got each other’s back as a family.”

Beaverton coach Andrew Vancil was thrilled to go out on top. The Beavers completed the pandemic season 13-2.

“We worked our whole season. The goal was to try to win Metro, try to get into a situation like this,” Vancil said. “I’m just proud of this group. We didn’t make it pretty down the stretch, but we got it done.”

For much of the second half, Rice had an answer every time Grant made a move.

The Generals got the deficit to single digits in the third quarter — then came back-to-back baskets from Rice.

They got it down to eight points in the fourth — and there was Rice with a scoop shot in traffic.

A couple minutes later, Grant got within eight again. Rice made a three-pointer, and on the next trip down the court, he grabbed an offensive rebound and scored on a putback to push the Beaverton lead back to 13.

“That doesn’t happen every single game. I just worked hard, put up some shots, and they went in,” Rice said. “I just try to score whenever I can, put some points on the board for my team.”

The Beavers needed all of those points, because Grant made its run late in the game.

Mosley finished with 13 points and Lawrence had 10 for the Generals, who finished 14-3. The three losses? Two to Jefferson and this one to Beaverton, two teams that won championships Thursday.