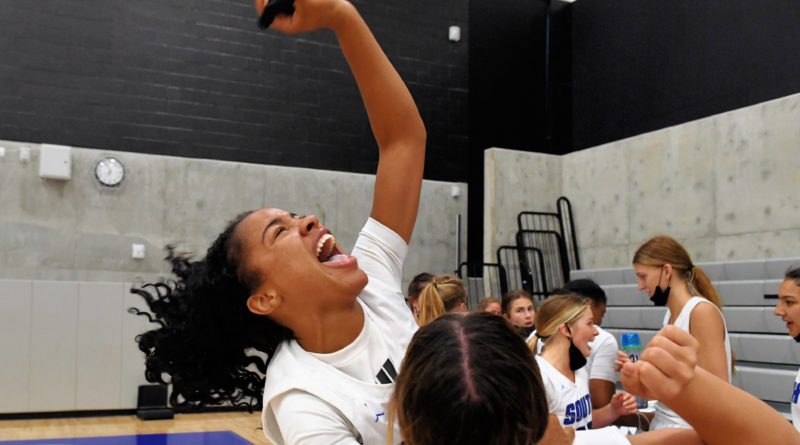 The 2021 Oregon high school basketball season was anything but perfect.

Yet, there still was some perfection to be found — say hello to the South Medford girls basketball team.

And the Panthers found an absolutely perfect way to wrap up their perfect season.

South Medford finished an unbeaten campaign and claimed the unofficial state championship by pressing and running its way to a decisive 64-33 win over Sheldon in the culminating-week elite Maroon Bracket tournament final Thursday at Grant High School.

“It means the world to us,” said senior guard Kaili Chamberlin, who had a huge game on both ends of the court, scoring 29 points and coming up with eight steals. “It felt great to come back and win the championship, especially after being cut short last year of what we knew we could have done. It felt great to play one last time with my best friends and win it all.”

“It means a lot,” said sophomore guard Donovyn Hunter, who scored 13 points in the victory. “We have six seniors on the team, and last year we had it taken away. Obviously, Sheldon, they’re a good team to go against, and we won state, so that feels good.”

“It means everything, honestly,” senior guard Bella Stone said with a smile.

For South Medford, which won its final 16 games last season and reached the semifinal round of the Class 6A state tournament before the rest of the event was canceled because of the COVID-19 outbreak, Thursday’s win gives the team a perfect season record of 13-0, plus a 29-game win streak, which it will carry into the 2021-22 season.

“It’s history,” Stone said of the perfect record. “(South Medford coach) Tom (Cole) has done that with one of his other teams. In that 2012 stretch they had, they went 32-0, and he said it was the best feeling that he ever had. He preached that to us, and we wanted that feeling. That was a big thing for us. We didn’t want to lose. We’re too competitive, and we have too much talent.”

“Having an undefeated season means everything to us,” Chamberlin said. “Being (Southwest) Conference champs, and now state champs, it’s a great feeling.”

“It just means a lot, because our team went out every single game not wanting to lose, and we proved that we’re a good enough team to make that happen,” Hunter said. “So, to go undefeated and win this, it’s just two-for-one.”

In addition to the perfect record, South Medford is looking at itself as the 2021 state champion.

“It’s not like normal years, with a normal state tournament, but we’re still taking it like that,” Hunter said.

Sheldon, coming off a grueling semifinal win over Tualatin the night before, finished its season with a record of 14-2.

“There were a lot of different things,” Irish coach Brian Brancato said. “We didn’t find out until the week before that we were going to get to play. We were in a local league that we didn’t play in for years, and we got some new players. I think we played 16 games and had 12 practices. But it was a joy. This is a great group of kids, and they battled. We always have high expectations, so the way we competed wasn’t a surprise. We feel blessed that we had the opportunity to play against good teams.”

While South Medford has plenty of talent on the offensive end of the court, it was the Panthers’ defense that seemed to play a huge roll in Thursday’s contest, helping force Sheldon into 35 turnovers, while giving up just 33 points.

“We can score in any way. Anyone on our team can score, so defense is where we really have to step up. Today, we communicated and we talked,” said Stone, who had nine steals. “I love being a part of that. I love being the motivator. If I can get my teammates hyped up and get my teammates a bucket, that’s all I care about.”

The Panthers flexed their defensive muscles right from the start, forcing Sheldon into turnovers in its first four possessions. Still, Sheldon, getting back-to-back three-pointers from junior Danika Starr and senior Carly Wheeler, grabbed a 6-3 lead with 4 minutes and 29 seconds left in the first quarter.

South Medford claimed the lead, 9-7, when Chamberlin had a steal and layup with 3:11 left in the period. The Panthers would keep the lead the rest of the way.

Chamberlin scored again following a steal by junior Sierra Logue, Hunter had back-to-back baskets, and Chamberlin finished the period with a buzzer-beating three-pointer, giving South Medford an 18-10 lead going to the second quarter.

Sheldon battled back, making the score 21-18 when Starr sank a three-pointer from the top of the circle with 4:39 left in the half.

South Medford responded. Senior Emma Schmerbach scored four points, Stone added a steal and layup, and Chamberlin drilled a three-pointer, helping the Panthers push the lead to 29-20 with 30 seconds to go in the period.

Sheldon came back, with senior Olivia Pierzina going 4 for 4 from the free throw line in the final 25.4 seconds of the quarter, making the halftime score 29-24.

But the Irish wouldn’t get any closer. Determined South Medford, turning up the defensive pressure even more, made sure of that.

Sheldon scored five points in the third quarter. Chamberlin connected on three three-pointers while scoring 11 points in the period. Schmerbach, driving strong to the basket, added five points. The Panthers, who ended the quarter on a 15-0 run, took a 52-29 lead to the fourth quarter.

With Chamberlin sinking two more three-pointers, South Medford went on a 10-1 run to open the final stanza, making it 60-30 with 5:57 to play.

From there, with a running clock and the benches empty, the Panthers cruised to the 64-33 victory.

“Emotions were just so high. They were out of the roof. It felt so great. It’s just unexplainable, especially after last year being cut short. It was everything we wanted — and more,” Chamberlin said. “We knew it would be tough from the start, but we knew that if we jumped out on top in the beginning and gave it everything we had, we knew we could win if we just played to our potential.”

“It was tears, happiness, joy,” Hunter said. “We were fired up, especially going against this team. And this was the last game the seniors had, so it meant a lot to us.”

“This was so much fun. I’d play with this team until the day I died, if I had the chance,” Stone said. “I wish we were all going to the same college, because I love the energy, and I love every single player on this team.”

Chamberlin sank seven three-pointers on her way to scoring 29 points, usually showing some emotion after every long-distance basket.

South Medford made 24 of 63 shots from the field, with seven three-pointers, and 9 of 22 free throw attempts.

Besides the defense and the potent offense, there might have been another factor to the victory and the undefeated season.

“Tom Cole isn’t the easiest coach to play for,” Stone said with a laugh. “But, honestly, it’s all him. He’s the best coach that anyone could ever have. He believes in us, pushes us when we need it and makes sure we’re focused. The play-calls he made, this little stretch that we just had, was crazy. He can take the game over, just because he needs to, when he needs to step in. When he needs to, he also knows when to step out and just let us play our game.”

“It’s a great way to go out,” Stone said. “There are six seniors, and there’s no other way we’d want to go out.”

“It felt great to go out this way. We did it for each other. It’s just insane; there are so much emotions, happiness and joy,” Chamberlin said. “It was the best time of my life. It was such a great experience.”

Sheldon made 9 of 34 shots from the field, with six three-pointers, and 9 of 13 free throw attempts.

“South Medford was better than us today,” Brancato said. “The effort was there. South Medford outplayed us today. We’re not strangers. We know who they are and what we were up against. I think we battled through that first half and weathered the storm. Some kids played a lot of minutes the last few days, and it wore on them. But hats off to them. They stayed after it with what was working.”

But the Irish look to potentially return a strong group next season, including Starr, Rhode and Bruegman.

“We have high expectations for the future,” Brancato said. “We’re solid; we’re blessed with good kids in our program. We’ll take two weeks off and then start again with the goal of getting up here again.”