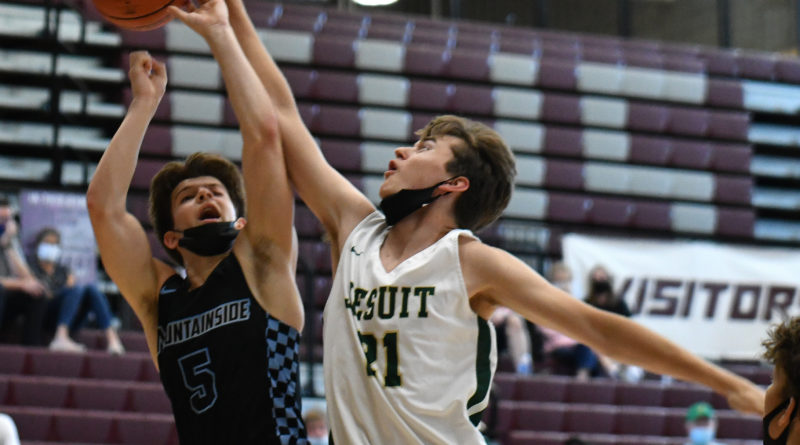 Amidst the craziness of this COVID-delayed high school basketball season emerged a budding Metro League rivalry that played out one more time Thursday at Franklin High School in Southeast Portland.

Mountainside and Jesuit met for the third time this spring for third place in the Blue Bracket of the season-ending Class 6A/5A culminating-week tournaments, and a veteran Crusaders team pulled away in the second half to win the rubber match, 53-42.

The teams split their regular-season meetings, each winning on its home court, so bragging rights between the programs were on the line.

“We just wanted to go out with the win,” said Jesuit senior James Lang, who was headed to Carroll College in Montana on Friday morning to begin his college career after notching 14 points, 10 rebounds and four assists to polish off his high school resumé. “We just wanted to finish with a strong ending and make sure that all of us were happy at the end. That’s what it came down to.”

Lang and classmate Liam Ruttledge, who led the Crusaders (10-5) with 17 points, were two key players returning from last season’s Metro League champion and top seed in the Class 6A state tournament. They were set to take the floor for their tournament opener against West Linn last March when the pandemic brought the high school sports world to a screeching halt.

Lang committed to Carroll in April and briefly considered shutting things down and preparing for his freshman season with the Fighting Saints.

“But four years at Jesuit means four years of playing basketball, so I knew coming into this senior year, I wanted to play this year,” Lang said. “And thank you to Coach (Gene) Potter for making this season happen and actually giving us a chance to run it. I’m glad we got four years in.”

While the Crusaders represent the Metro League’s old guard, Mountainside (11-6) is the new kid on the block that quickly has joined the league’s upper echelon.

After winning six games in the program’s first season, the Mavericks surprised many by finishing second to Jesuit last year and reaching the second round of the 6A playoffs, falling to West Linn at home with a shot at a quarterfinal against the Crusaders on the line.

Potter, who recorded his 599th victory Thursday, has seen many challengers come and go during his 29-year tenure with the Crusaders.

“I’m not really surprised how quickly they became very, very good,” he said. “Dustin (Hewitt) does a really good job coaching them, and they’ve got really good athletes. I love having them as an addition to the league.”

Mountainside notched its first victory over Jesuit on May 29, but the Crusaders avenged the defeat two weeks later on their home court before winning Round 3 on Thursday.

“It’s always fun playing them,” said Mavericks junior Dimitri Cohen, who had five points and eight rebounds Thursday. “It’s always a close game, so it’s going to be especially fun next year because we have a lot of returning guys. I’m excited for next year.”

Cohen is one of seven Mavericks — including all five starters — who took the floor Thursday who’ll be back in less than five months when (fingers crossed) the high school sports landscape is back to normal.

“We’re going to work hard in the offseason, see what we can do, and then next year, we want to win the league,” Cohen said.

The shorter offseason coming off a shortened spring season following a 14-month hiatus could benefit teams like the Mavericks that built valuable momentum and return the majority of their rosters.

With how hectic the past two months have been, though, most coaches will join Hewitt on the golf course for a well-earned respite before getting back to business when school is back in session.

“It’s been a grind of a season for everyone,” Hewitt said. “Everyone’s been going for a while doing offseason stuff, and then the games just came at you so quick.”

With returning players such as junior wing Dezman Baker, who scored a game-high 20 points Thursday, and guards Cohen and Dylan Westlake (11 points, three assists), the Mavericks could make a run at their first official league title (they topped the Metro standings by a half-game this spring) and state tournament berth next winter.

“Those are definitely some good pieces, but there’s all those other kids around them who are great, too,” Hewitt said. “You know, where we’re at, I do want to take a break, but I’m at the same time excited about next year.”

This season ended with the Mavericks fighting back from a six-point halftime deficit to grab a brief lead at 28-27 with 3:27 left in the third quarter when Baker hit a three-pointer from the top of the arc.

The Crusaders quickly regained the lead when Mike Brittingham buried a three from the right corner 26 seconds later to kick off a 14-0 run over the next 5½ minutes. When Spencer McKelligon stole an outlet pass and fed Mack Wall for a two-handed slam with 6:34 left, they led 41-28, and the Mavericks never got closer than nine the rest of the way.

“We were kind of lackadaisical that third quarter,” Lang said. “But we had a new lineup come in, and we knew what we had to do. We came in and gave all the energy we had left in us and came back and won it.”