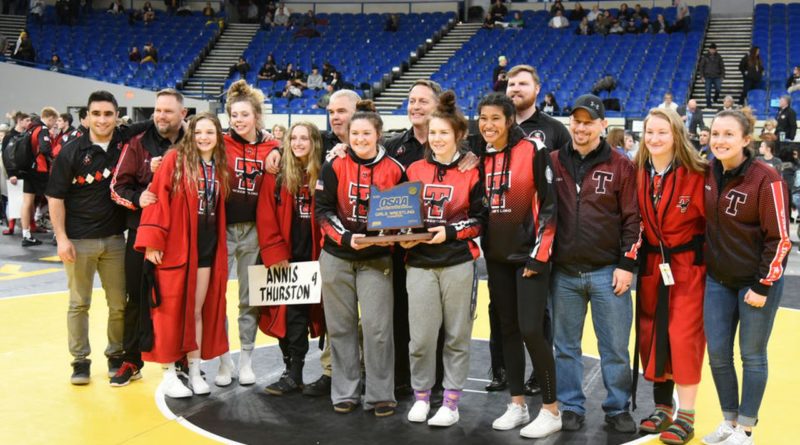 A year ago, the Thurston girls won the wrestling state championship in one of the final competitions before the COVID-19 pandemic shut down high school sports.

Unlike last year’s state championship, when Thurston racked up points despite not winning an individual title, this year saw three Colts stand atop the medals podium. Sophomore Kaylee Annis opened the finals at 100 pounds with a 40-second pin of Ashland’s Sienna Caruso, and Annis was joined by seniors Cailee Hallett at 125 and Adelle Kent at 170.

Another high-profile match saw Milwaukie senior Fiona McConnell, a state champion last year and ranked No. 10 in the country at 180, pin Gervais senior Alexys Zepeda 32 seconds into the third period of the 190 final. Zepeda made history as a freshman in 2018 with a third-place finish at the Class 3A state tournament, the best showing ever by a female wrestler at the boys state championships.

Three other nationally ranked wrestlers took home titles from the tournament, organized as an unofficial state championship after the OSAA handed the culminating week for Season 4 sports such as wrestling back to the schools.

Oregon City senior Emma Baertlein, ranked No. 20 at 106 pounds, won at 105 with a 54-second pin of Sicily Neuschwander of Sweet Home. Hillsboro junior Ayana Medina, ranked No. 17 at 117 pounds, moved to 130 for the postseason and pinned Jessy Hart of Sweet Home in 1:05 to win the title, and 20th-ranked Raina Herzog finished her career in a Cottage Grove singlet with a third-round pin of Elmira’s Tayla Parsons at 235.

The girls championship meet kicked off a final weekend of OWA championships across the state. The 6A championships run Friday and Saturday at Newberg High School, while the 5As are at Cottage Grove, 4As at Cascade in Turner, 3As at Redmond and the 2A/1A meet at Sweet Home.