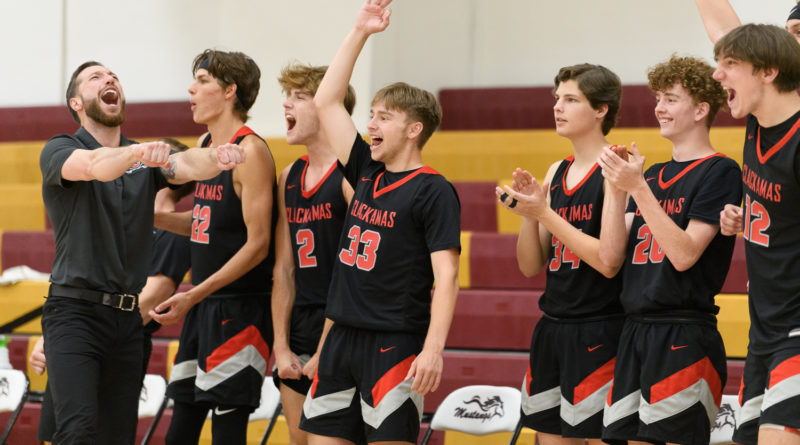 MILWAUKIE — Down by two in overtime, Clackamas senior Izzy Baker knew exactly what he needed to do — attack, attack and attack some more.

On three consecutive possessions, Baker squared up his defender and drove the lane. The first two drives ended with layups, and the third resulted in a foul and two made free throws.

“They were pressing up on defense, and I could tell that the dude guarding me was tired,” Baker said. “I had to make the decision to go hard and just finish no matter what. We didn’t come here to lose close ones, we came here to win.”

Baker put up six points in little more than a minute to power Clackamas to a 65-62 win over reigning Class 6A state champion Jesuit in a Blue Bracket semifinal Wednesday night at Milwaukie High School.

“We didn’t settle for threes, and we started to force the issue,” Clackamas coach Cameron Mitchell said.

Baker also came up big on defense, drawing a late charging foul against Jesuit’s Tyree Blake to protect the margin heading under a minute to play.

The Crusaders gave themselves a chance when Spencer McKelligon scored a third-chance basket at the front of the rim to cut the gap to two points with 25 seconds left.

A quick foul sent Clackamas senior Jackson Jaha to the line, where he sank both free throws to finish with a team-high 20 points. Jesuit had a three-point try come up short to seal its fate.

“I’m really happy for the kids to get this chance to play against a really amazing team,” Mitchell said.

Baker had a simpler message.

The Crusaders grabbed the upper hand early in Wednesday’s semifinal, finishing the first quarter with a 12-point run that had the Cavaliers doubled up at 14-7. Johnny Miller highlighted the spurt when he dived out of bounds to save a loose ball, then got it back and sank a three-pointer.

Clackamas took a 25-22 lead to halftime after K.J. Horsley stood with the ball on his hip waiting for the last shot before darting to his left, moving past a screen and drawing a crowd of defenders. He jumped straight up and found Jaha in the far corner for an open three-pointer at the horn.

The Cavaliers burst out of the locker room with Horsley scoring on a tip-in, followed by a Jesuit turnover. Next, Damon Erickson split two defenders in the lane to finish a fast break, and Jesuit missed a three.

Erickson drove the baseline and whipped a pass inside, where Baker reached high and tipped it twice to gain control of the ball. He turned toward the basket, spun back and fired a pass to Erickson, who was hanging out in the corner. Erickson gave a pump fake, waited for a defender to fly past and dialed up a three-pointer.

Jaha added back-to-back triples, and Erickson picked off a pass and knocked down 1 of 2 free throws after being fouled on his way to the hoop.

Clackamas held its biggest lead at 43-28 midway through the third quarter.

“They are a good half-court team, but they couldn’t run with us,” Jaha said. “We started pushing the pace and hitting our shots.”

The Cavaliers were on easy street, right?

“It all started on the defensive end, and we started pushing the ball and knocking down shots, but we knew that they would make a comeback,” Mitchell said.

Jesuit started its rush late in the third when Jake Gorman came off the bench and sank a three. Moments later, Johnny Miller came up with a steal and fired a quick pass to Mike Brittingham for a layup that cut the margin to single digits heading to the fourth quarter.

Gorman kept it going when he ripped a rebound from a Clackamas player and scored on the putback.

The Cavaliers tried to find a spark when big leaper Ryan Lewis thundered through the lane and went up for a dunk only to get tangled up on the rim. The ball popped out, and Lewis crashed hard to the floor. The whistle blew and coaches came off the bench to check on the fallen player. In the commotion, a Clackamas assistant exchanged words with one of the referees and was hit with a technical foul.

“It was a brutal fall, and we were a little frustrated,” Mitchell said. “But that’s not what our program is about — we can’t lose our composure.”

After getting checked by a trainer, Lewis was able to stay in the game.

Jesuit’s James Lang, the game’s leading scorer with 24 points, sank both technical free throws. Teammate Joe Lairson put a floater over the front of the rim.

In a matter of minutes, the Cavaliers’ 15-point lead was down to three.

And the Crusaders weren’t done.

Lang drew contact in the lane and finished his shot on his way down for a three-point play to tie the score. Next, Lang poked a ball loose near the sideline, jumped out of bounds and saved the ball to McKelligon to complete the turnover. The possession ended with Blake scoring off the glass from close range to put the Crusaders up 48-46 with 3:17 to play.

“We regrouped at the end of the third. We knew we still had eight minutes to play and that it wasn’t over,” Lang said. “We shuffled up our lineup a bit and got some fresh legs into the game. Every possession started on the defensive end.”

Clackamas regained the upper hand down the stretch, highlighted when Horsley dribbled behind the basket and sent a wrap-around pass inside that found Lewis cutting down the lane for a three-point play.

“We usually drive and kick it out to the corner for three, but Ryan does a good job of sneaking in there, and I found him,” Horsley said. “That was really good for our momentum. We’ve played a lot of these close games, and we know how to stay calm and execute.”

Lairson hit a three from the right side with 13.5 seconds left to send the game to overtime.

The Crusaders grabbed their final lead, 57-55, early in the extra session when McKelligon blocked a shot and Lang rushed the other way for a layup.

“We lost an overtime game to Westview just last week,” Lang said. “We’ve gotta learn how to finish these games. We continued to fight, but we just couldn’t end it.”