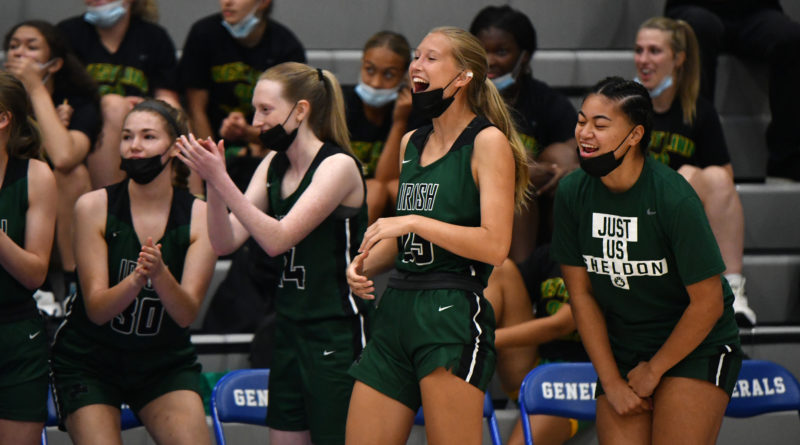 Every possession was crucial.

Nearly each and every shot was contested.

Intensity was at a high level.

And, as the final horn sounded, so did Sheldon.

The Sheldon High School girls basketball team earned a spot in the championship game of the power-packed Maroon Bracket of the culminating-week tournaments by getting a 43-37 win over Tualatin in an all-out battle of a semifinal contest Wednesday at Grant High School.

“It means everything. We’re in the championship now,” Irish junior Danika Starr said with a smile. “We didn’t even think we were going to get here. Every game is just a blessing.”

“It means a lot,” said Sheldon sophomore forward Beaux Bruegman, who scored a game-high 16 points. “Getting to the championship game is always a goal, but this year, with our personnel, it was definitely on the list.”

The Irish (14-1) advanced to the Maroon Bracket championship game — which could be considered the state title contest — which will be held Thursday at 5:30 p.m. at Grant High School.

“I’m hoping it’s South Medford, because that’s the game everyone is waiting for,” Starr said before Wednesday’s other semifinal between the Panthers and West Linn. “I think we all want to play South Medford.”

Starr and her Sheldon teammates get their wish, as South Medford rallied for a 59-47 win over West Linn, setting up an all-Southwest Conference final.

“We’ve already played West Linn, and, obviously, South Medford is in our conference, so it would be really cool to play them,” Bruegman said.

Tualatin moved to 13-2 with the hard-fought setback.

“Hats off to them. They just make everything really tough. They’ve got a couple kids who are just crazy athletic. The big thing is that they outrebounded us. That was kind of the deciding factor,” Timberwolves coach Wes Pappas said. “Our girls battled back and tied it up twice. We didn’t give our best for 32 minutes, but we’ve got a lot of fight in us.”

“They’re a really talented, good team, and I think we are, too,” said Tualatin senior post Natalie Lathrop, who led the Timberwolves with 11 points. “Obviously, it went back and forth. You can always look back and wish some things had gone differently, but they played really hard. They’re a good team.”

The semifinal opener was a defensive battle from the start. Sheldon, with senior Carly Wheeler scoring on a follow-up shot and with Starr sinking a three-point basket off an assist by junior guard Paityn Rhode, jumped out to a 5-0 lead with 6 minutes and 56 seconds left in the first quarter. But the Irish scored only two more points in the opening period, those coming on a layup by Bruegman.

Tualatin, getting baskets from sophomore Olivia Poulivaati, senior Sidney Dering and senior Teagan Gaviola and free throws from Lathrop and senior Aurora Davis, rallied to claim an 8-7 lead going to the second quarter.

That’s where the Irish answered. Sheldon opened the period with a basket on a drive to the hoop by sophomore Tori Line and a three-pointer by Starr from the top of the circle, giving the Irish a 12-8 lead with 6:30 remaining in the half.

Tualatin responded with a three-point play by Lathrop and a three-point basket by senior Kasidy Javernick. The Timberwolves tied the score at 15-15 and again at 17-17. Tualatin took a 20-19 lead when Davis scored on a short-range banker off a pass by Poulivaati with 37 seconds left in the second quarter.

Sheldon came back, with Bruegman sinking a 13-foot bank shot, to take a 21-20 advantage at the end of the first half.

The Irish, turning up their defensive intensity, took charge of the game early in the third quarter. Sheldon didn’t allow Tualatin to score in the first six minutes of the period. Meanwhile, the Irish, getting a couple of baskets from Bruegman, a three-pointer from Rhode and two free throws from Wheeler, claimed the biggest lead of the game, at 30-20, with 2:11 remaining in the quarter.

Tualatin ended its scoring drought when Lathrop converted a three-point play with 1:51 left in the period. The Timberwolves added a basket on a drive to the hoop by Poulivaati, trimming the Sheldon lead to 30-25 going to the fourth quarter.

That’s when the intensity went up even more.

Tualatin continued its rally early in the final stanza, getting another three-point play by Lathrop and a basket on a jumper by Javernick, tying the score at 30-30 with 5:43 to play.

Keeping that lead wasn’t easy. Tualatin, with Davis connecting on a three-pointer and with Lathrop sinking a turnaround jumper, cut it to 38-37 with 2:05 remaining.

But Sheldon was determined not to let the Timberwolves regain the lead. The Irish got a key steal on a tip from Wheeler and a couple of clutch rebounds by Bruegman and Wheeler. Bruegman also went 5 for 6 from the free throw line in the final 57.1 seconds.

“Obviously, there was a little pressure,” Bruegman said of the free throws. “It was a close game, but I was able to pull through. My team needed me, so that’s what I did.”

“I knew they were going in,” Starr said. “She’s solid. She might be the most solid player on the team, and she’s the right player to get fouled at the end of the game.”

Bruegman’s last two free throws, coming with 11.8 seconds remaining, all but wrapped up the victory for Sheldon, sending the Irish to the championship game.

“It was our toughness,” Starr said of the key to victory. “Our shots, initially, weren’t falling, but we kept at it until the end. We did what we needed to do on defense, for sure. We matched the intensity. We were in it until the last second. The same with Tualatin. They were in it, too.”

Sheldon made 14 of 45 shots from the field, with five three-pointers, and 10 of 13 free throw attempts. The Irish outrebounded Tualatin 32-22 and helped force the Timberwolves into a 14-for-44 shooting night from the field.

“Defense is always a key for our team, and we always want to succeed at it,” Bruegman said. “It was defense and hitting shots at the end.”

“We scouted them. We knew what they were going to do,” Starr said. “But they obviously figured it out, as well.”

The Timberwolves did seem to figure things out, but it just wasn’t quite enough to get them past Sheldon.

“It’s just been a great season,” Pappas said. “For us, we wanted to get into the championship game, but sometimes, things just don’t fall that way. But I couldn’t be more proud of this group.”

Lathrop had a double-double for Tualatin with 11 points and 11 rebounds. She also had three blocked shots and two assists.

“When we started this season, we weren’t sure that something like this would happen,” Lathrop said. “We’re so glad it did, and it was an awesome experience.”

Tualatin will finish its season Thursday when it faces Three Rivers League rival West Linn in the Maroon Bracket third-place game, which will be played at 2 p.m. at Grant. But the Timberwolves will have to play that game without the 6-foot-3 Lathrop, who will be leaving Thursday morning for the University of Nevada, Reno, where she’ll continue her scholastic basketball career at the collegiate level.

“She’s just been a phenomenal player for us, the past two years, especially. I can’t thank her enough,” Pappas said of Lathrop. “She’s given so much to us. It’s such a great group of seniors.”

“It was so cool to be able to have this tournament, to be playing against the best teams in the state. It was just an awesome experience,” Lathrop said. “My four years at Tualatin have been so good. I can’t believe it’s my last game.”

Meanwhile, Sheldon is prepping for its title game with South Medford.

“We just have to come and play consistently — hit our shots and play good defense,” Starr said. “But I think the big thing for us is heart. Our bench stepped up their intensity tonight, as well. They were right there with us. That really helps us, too, having that energy.”

“We have to rebound and hustle — more hustle, more heart, more guts,” Bruegman said. “It all comes down to mental toughness.”

South Medford should have plenty of momentum on its side entering Thursday’s title tilt following its impressive come-from-behind semifinal win over West Linn.

South Medford, which trailed 17-6 at the end of the first period, chipped away at the West Linn lead in the second quarter. Coleman scored eight points in the period, and senior Emma Schmerbach added five, helping the Panthers trim the deficit to 29-24 at halftime.

South Medford and senior Kaili Chamberlin took over in the third quarter. The Panthers opened the period with an 11-0 run, with Chamberlin scoring seven consecutive points in a span of 1:21, to take a 35-29 lead with 5:19 left in the quarter.

Chamberlain, who went scoreless in the first half, scored 10 points in the period, helping South Medford take a 43-37 lead to the fourth quarter.

West Linn was still down by six, at 48-42, after senior Payton Shelstad sank a three-pointer with 3:53 to play. But the Lions couldn’t get any closer.

South Medford takes a 12-0 record to Thursday’s title game. Going back to the 2019-20 season, the Panthers are riding a 28-game win streak entering the game with Sheldon.

The Lions will take an 11-4 record to Thursday’s third-place game with Tualatin.

Photos from Sheldon’s win over Tualatin