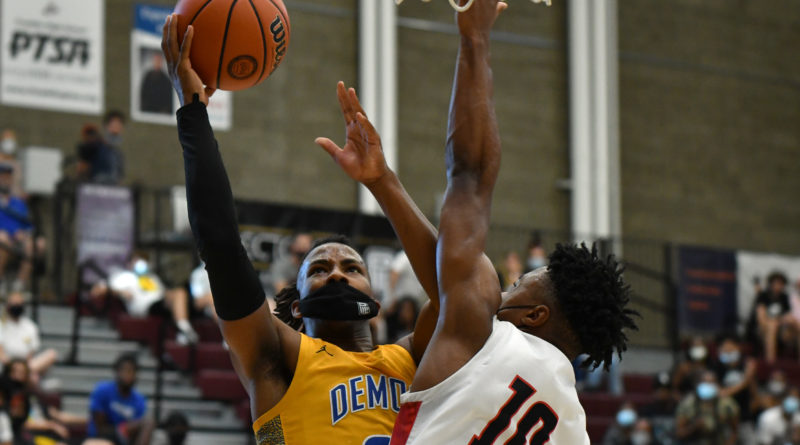 It was called the championship game of the Blue Bracket of the Oregon high school basketball culminating-week tournaments.

It could have been called the Lamar Washington game.

Washington scored 32 points, made the defensive play of the game and had the assist on another defining basket, leading Jefferson to a 67-62 victory over Clackamas at Franklin High School on Thursday evening.

“We asked for a season. We wanted a season,” Washington said.

No way were they going to waste the opportunity.

“We wanted to go undefeated, but we didn’t. But coming into this tournament, (Clackamas) has one of the best records in the state, so it meant a lot coming out here with a win,” Washington said.

Jefferson completed this COVID-19 season with a 14-3 record, including three wins in the culminating event.

“It’s a state tournament for us,” Democrats coach Pat Strickland said. “That’s what we’re calling it. If Clackamas would have won, they would have called it a state championship, so we’re going to call it one, too.”

Mookie Cook did not shoot much but still made his presence known on defense and with rebounding. Plus, he attracted so much attention from the Cavaliers, opening opportunities for his teammates.

“Impact the game at different levels. Tonight wasn’t my night (scoring-wise),” Cook said, pointing to Washington. “He went crazy, so I’ve got to impact in different-type ways.”

It is no secret that Washington, a junior, and Cook, a sophomore, could be heading to prep school in Arizona next season. Washington said he is leaving that decision in God’s hands.

Cook was asked if this was his last game in a Jefferson uniform.

When asked to confirm, he said yes again.

There is a chance of one more game for Jefferson this season, however. Strickland said it’s possible the winners of the Blue Bracket and the Red Bracket could schedule a game next week.

But until that is determined, if this was Cook’s last game with Jefferson, he leaves with a bracket title.

Washington got it going in the second quarter, scoring 12 points as Jefferson erased a small deficit.

“After my first couple of shots, my teammates were like, ‘Let’s go, Lamar. Pick it up. Let’s go. Let’s go.’ It gave me confidence to go crazy this game,” Washington said.

He added 11 points in the third quarter, including a play on which he poked away the ball on defense and then sprinted the other way for a dunk, giving Jefferson a 12-point lead at 47-35.

Ryan Lewis would not allow the Cavaliers to go away, though. He made two three-pointers down the stretch of the third quarter, keeping Clackamas within striking distance.

The Cavaliers’ KJ Horsley scored six quick points in the fourth quarter, and it was a one-point game.

A free throw by Trejon’ Williams gave Jefferson a one-point lead, then Washington took over on defense. He blocked a three-point attempt, got the rebound and started a fast break. He was fouled, and he made both free throws to make it 63-60. Jefferson never lost the lead again.

Damon Erickson’s basket made it 63-62 with less than two minutes to play.

Jefferson killed some clock, and then Washington the playmaker set up Sanborne Melson for a layup to push the lead back to three.

“If I see my open teammate, I’m going to tell them to shoot every time,” Washington said. “I’m trying to facilitate. I’m always trying to make the right play. Can’t be selfish.”

After a Clackamas timeout, Washington and the Democrats were locked in defensively, forcing a turnover on the inbound, leading to two more free throws from Washington to seal the deal.

Washington was 10 for 17 from the field, including three three-pointers, and 9 for 10 from the free throw line.

“Bunch of resilient guys,” Strickland said of his players. “We didn’t get a lot of practice. Guys are banged up. But they stayed together. When you have two superstars leading the way, that helps out in a big way.”

“I love them and I’m sad it’s over,” Clackamas coach Cameron Mitchell said. “I was proud of them, how they played. It’s bittersweet that we’re done. We did everything we could. We won the league championship. We finished 15-2. We gave these guys all they could handle. I’m just really happy for the guys.”

Horsley had a hot start for Clackamas, making his first four shots in a nine-point first quarter that gave the Cavaliers a 16-12 advantage.

Washington took over in the second quarter for the Democrats. There was a breakaway dunk. He had an offensive rebound and a putback. He buried two three-pointers. It was the Washington show for an eight-minute stretch, and Jefferson had a 31-26 lead at the half.

It turned out, he was just getting started.