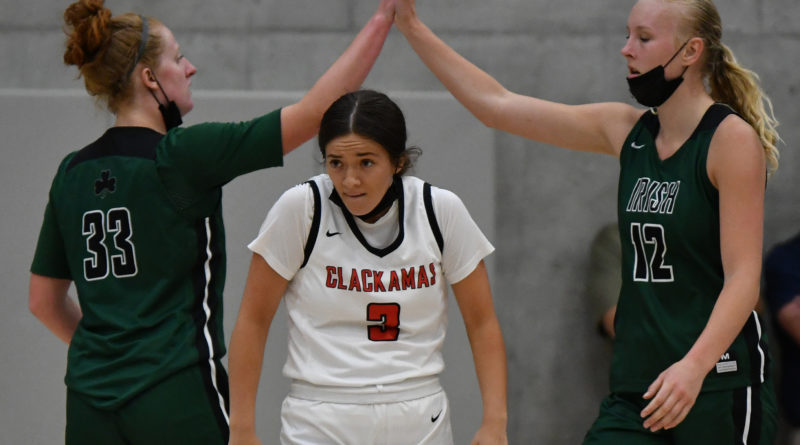 PORTLAND — The Sheldon girls basketball team rallied in the second half to notch a 72-66 win over Clackamas in the first round of the elite Maroon Bracket on Tuesday at Grant High School.

The Irish battled back from two seven-point deficits in the third quarter, moving ahead to stay, 48-47, when Carly Wheeler chased down a long rebound and sent a quick pass ahead to Danika Starr for a layup.

Olivia Pierzina got the final comeback started when she drove past a flurry of white shirts uncontested through the lane for a layup. Starr was fouled on a three-point attempt from the corner and sank each of her free throws, and teammate Beaux Bruegman hit a foul shot after pulling down an offensive rebound.

“We talked all week about being tough and weathering the storm,” Sheldon coach Brian Brancato said. “We put some pressure on them defensively and were able to turn them over a bit.”

Sheldon’s Paityn Rhode opened the fourth quarter by drilling a three-pointer and flashing a fist pump and a smile while running down the sideline.

The game remained tight into the final minutes before Starr and Rhode connected on back-to-back three-pointers to put Sheldon up 66-59 with 2:35 left.

“Getting that separation was a bit of relief — not every possession felt like it was do-or-die after that,” Brancato said.

Rhode applied the finishing touch when she swiped a ball away with Clackamas hunting for a three-point try outside the arc. The Irish got an easy basket inside from Bruegman on an ensuing inbound play to stretch the gap to nine points with less than a minute to play.

Rhode and Starr tied for the team high in points with 23 apiece.

“Coming into tonight, we knew we were both good teams,” Rhode said. “It was going to come down to who competed the most. We were fired up, and we hit some big shots.”

The girls Maroon Bracket is packed with four league champions and four runners-up — the eight teams hold a combined regular-season record of 88-15 (.854). It’s the best mark of any of the eight culminating-week tournaments on the boys or girls side.

“In my opinion, these are the best eight teams in the state — I feel fortunate that we get to be a part of it,” Brancato said.

“It feels great to get this win,” Starr said. “Honestly, I didn’t even expect to have a season, so every game is an opportunity.”

Sheldon advances to play Tualatin in a 5:30 p.m. semifinal Wednesday at Grant. Clackamas will take on Beaverton in a consolation game.

“I love that we were included,” Clackamas coach Korey Landolt said. “I’m big on legacy, and we have two more games, and they will be tough games, where we have a chance to leave a legacy. What we do matters.”

The Cavaliers took their first lead, 14-12, late in the first quarter when Rhyan Mogel flipped a no-look pass over her shoulder to set up teammate Bella Garcia for an eight-foot jumper in the lane.

Later in the half, Mogel stole an inbound pass, drew three green shirts as she approached the arc and fired a pass cross-court to Sydney Benedict for an open three-pointer.

Mogel did plenty of scoring on her own, finishing with a game-high 27 points, including buzzer-beating three-pointers to end each of the first two quarters. Clackamas took a four-point lead to halftime.

The Cavaliers extended the margin in the third quarter when Benedict fired another deep ball. This one looked short, prompting her to charge her shot only to watch it clip the inside of the rim and trickle through for her fourth three-pointer of the night.

Following an Irish turnover, Benedict launched a football pass beyond half-court that found Mogel in stride down the sideline. Mogel took a couple of dribbles and fed the ball inside to Eliza Buerk. Her shot rolled off the rim, but Mogel grabbed the rebound and went back up for a 47-40 lead late in the third.

Sheldon would rally to take a one-point edge to the fourth quarter — a lead it would never surrender.

“Sheldon did a good job jamming up our high pick-and-roll, and we weren’t able to get what we wanted out of certain plays,” Landolt said. “We haven’t seen a team with the size of Sheldon, and we had to fight hard for every rebound we got today.”

In the Maroon Bracket opener, West Linn scored a 43-39 win over Jesuit. In the other early game, South Medford stayed perfect with a 76-52 win over Class 5A Wilsonville.