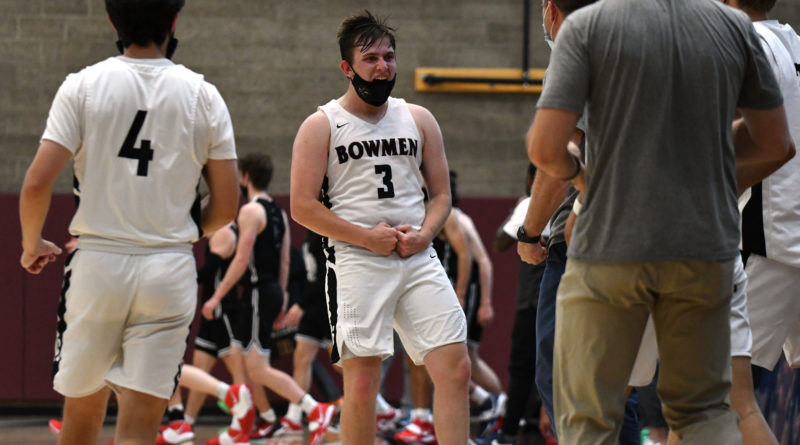 PORTLAND — When Joey Summers arrived in Sherwood after moving from Nevada last July, he didn’t know anyone — much less anybody on the high school basketball team he’d join.

The first person to greet him in the new town was his future teammate, Caden Davis. The two sharpshooters immediately hit it off.

From one-on-one to shooting contests, their competitiveness instantly came out from the moment they met.

“I remember the first competition we had, I was like, ‘I’m going to kill this dude,’” Summers said, laughing. “And he killed me. I was like, ‘Oh wow, OK. This is awesome.’”

Fast forward a year, and the duo has become one of the state’s most dangerous backcourts and outside threats. They combined for 26 points and five three-pointers Tuesday at Franklin High School to lead Sherwood past Lake Oswego, 59-51, in the first round of the Red Bracket in the state’s culmination-week tournaments.

Davis said they played as much basketball as they could last summer to prepare for this season.

“I was first guy to meet him, first guy to work with him,” Davis said. “We were looking for each other in open gyms. If we’re both shooting (well), it’s impossible to guard.”

Davis scored a team-high 17 points, while Summers chipped in 11 as the Bowmen held off every Lake Oswego comeback attempt and led for the game’s final 26 minutes. Davis and Summers combined for a crucial nine points in the fourth quarter.

“Caden and Joey have become real good buddies,” Sherwood coach Rahim Tufts said. “They’ve got real good chemistry on the court, where they both can light it up and can make plays.

“It’s pretty neat to see Joey immerse himself in the program and fit right in immediately.”

The Bowmen have relied on their outside shooting all season and it didn’t disappoint Tuesday, when they knocked down 10 of 25 from behind the arc (40 percent). Lake Oswego cut several double-digit deficits to four and six on different occasions in the second half, but Sherwood always had an answer.

“Our guys didn’t flinch, they didn’t get panicked,” Tufts said.

Sherwood stretched its lead to 11 points after halftime, but the Lakers hung around. Back-to-back three-pointers from Lake Oswego’s Grayden Smith and Luke Brauner cut the Bowmen’s lead to 48-44 with 5:40 left. Sherwood countered with a 6-0 run, including Davis’ three-pointer, to push the advantage back to 10 and seal the victory.

Lake Oswego left the court frustrated and disappointed after knowing the Bowmen’s strengths with their shooting abilities but not being able to get it done.

“We were really focused on not letting them have their outside game, knowing a lot of their points come from threes and long rebounds,” said Lakers senior Trace Salton, who scored 17 points. “I think us not guarding the three-point line and not boxing out was our downfall. We were trying to get a run going, but every time we had a two, they answered with a three.”

“Coach Tufts does a good job giving those guys the green light and the confidence to attack,” Cho said. “It’s one thing for us coaches to prep it and see it … and they’ve got to go and follow the game plan. We didn’t do that today, and that’s the result we got.”

The loss continues an up-and-down season for the Lakers (7-7), who started the season 1-5 and then won six in a row before losing their past two.

Cho said this abbreviated season has been a good learning experience for the underclassmen with an eye toward 2022 and the state tournament in March.

“It’s really up to the junior and sophomore class to figure out and be ready to have the mindset to carry the torch,” Cho said. “We’re not quite there, so it’s good to recognize it now because everything we do in our program is geared toward the Chiles Center in March. That’s how I look at it.

For Sherwood (14-1), its dream season continues with its only mishap coming against powerhouse Jefferson in a loss June 4.

With no official state tournament this season, the Bowmen are playing this week like it’s for everything.

“It’s our state tournament,” Davis said. “I know there’s two different top tiers — we’re in one of the top-tier (brackets). We’re pretty much playing for co-state champions. That’s our mindset, and we’re doing as much as we can to prove we could’ve been state champions.”

Sherwood entered the season with a lot to prove after last year falling short of its first state tournament appearance since 2014. The program lost all-state players Jamison Guerra and Blake Jensen to graduation but went undefeated in Pacific Conference play and has proven to be one of the state’s top contenders.

“Yes, Jamison and Blake were huge for us — two of the best players to come out of our program,” Tufts said. “So, to go undefeated in league again, we just always found ways to win.

“I have a ton of respect for Coach Cho and their program. We used to be in the TRL my first two years in Sherwood and we went 0-4 against LO, so it feels really good. Our guys prepared for it. I don’t think a lot of people thought we could win this game, so it feels good.”

Asher Krauel had 10 points for Sherwood, Zack Ariza added nine and Baydon Kullowatz had seven. The Bowmen were 20 of 48 from the field (41.7 percent).