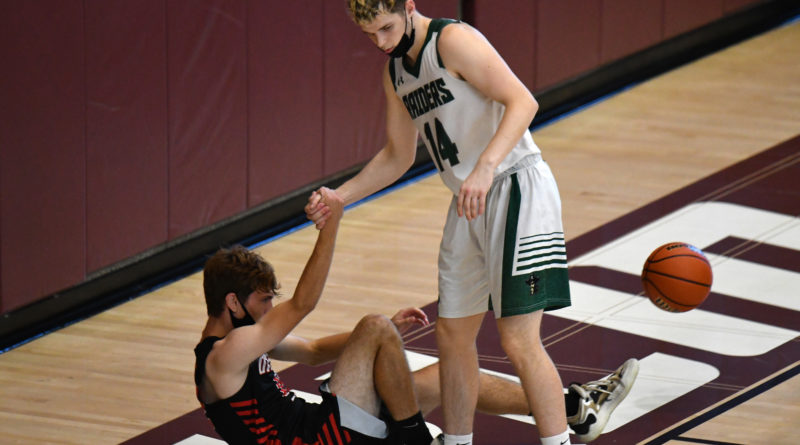 But for many Oregon high school basketball teams and players, summer vacation hasn’t started yet — and they couldn’t be happier about it.

In a basketball season that has been anything but normal, these teams get to finish the campaign with what feels like a little bit of normalcy, with some postseason action.

For teams in the Class 6A level, and some at the 5A level, that means eight-team culminating-week tournaments being played Tuesday through Thursday at various sites in the Portland-Metro area.

“I’m really happy that we got this tournament this year,” Reynolds senior guard Keenan Coleman said following the Raiders’ come-from-behind 57-55 win over Oregon City in a boys Black Bracket first-round game Tuesday at Franklin High School. “We didn’t really get all of the playoffs last year. We got cut short this season, so to get this tournament really means a lot.”

“This was something good to play for at the end of the season,” Reynolds senior guard Brandon Buffington said. “I just want to finish out the season with my team. We started off this year with the goal of trying to do better than we did last year, and I think we did that. And now we’re trying to go as far as we can.”

With a delayed, and shortened, season, the culminating-week tournaments have provided a reward to the teams and players that have endured uncertainty for more than a year.

“The kids are really excited to extend the season,” said Sherwood coach Rahim Tufts, whose Bowmen were slated to face Lake Oswego in a Red Bracket first-round showdown at Franklin High School on Tuesday. “This season has been an emotional roller coaster, starting in the fall and winter, when we didn’t even know if we’d have a season. We practiced outside in the rain, did some shooting in the gym, and the kids hung in there and kept working hard through everything. We’re happy that we get this extended opportunity in this season, to play for something in a bracketed tournament. That really helped with keeping a competitive spirit.”

“It’s cool that the state could come together and do something like this. It’s still competitive, and we’re all looking forward to it. We’re treating it like a state tournament, and we’re ready,” Sherwood senior guard Asher Krauel said. “We’ve got three more games, and we’re going to try to make the most out of it. We’re going to compete our butts off every game.”

Krauel, like many players taking part in the tournaments this week, has already gone through commencement ceremonies and is a high school graduate — but that doesn’t seem to matter.

“We’re still a member of the Sherwood community, and that’s what we’re playing for,” Krauel said. “It’s definitely different, but our mindset is still the same.”

Definitely different — that could describe the 2021 Oregon high school basketball season as a whole.

“It’s still a little weird. The sun is shining, and we’ve got some kids that have already graduated. But it’s great that the seniors get this to finish up with,” Tufts said. “The last day for the teachers at the school was Friday, and a lot of them were excited to start the summer break. But I was like, ‘No, not really.’ But I’m really happy about it.”

“It’s definitely different, but we’re feeling blessed that we’ve had a season,” Krauel said. “We’re practicing when it’s 90 degrees out. It feels like we’re playing summer ball. But I know all of us, especially the seniors, are all happy with how it turned out. (Sherwood senior) Joey Summers transferred here from Nevada, and they didn’t even have a season. So, he lucked out with that.”

There was more than just luck involved. Jeff Peeler, the assistant athletic director for the Portland Interscholastic League, was one of the driving forces behind the organization of the culminating-week tournaments.

“With how things have been going throughout the year, and dealing with all of the moving regulations and things, and, at one time, not knowing if we can play at all, everyone is very thankful that we get to do this,” Peeler said. “The (Oregon School Activities Association) gave us the final week back, like they have for every sport, but it had been happening so late that it made it hard to get something put together. We said, ‘Why don’t we jump out in front?’ We wanted something more than just a random game. So, we decided to do something.”

“Our JV kids also get a tournament,” Tufts said. “They’re really pumped for that.”

The tournaments aren’t intended to crown state champions, Peeler said, but they’re to provide a competitive way for the teams — all the teams — to finish the unusual season.

“I kind of volunteered to get things started, and we took it upon ourselves to do something for the kids. And, in the PIL, basketball is one of our stronger sports, and we’ve got some really nice, newer gyms,” Peeler said. “These aren’t state championships. We wanted to provide appropriate games with teams at the same level. We’re hoping all of the games are close.”

Peeler sure got his wish with the back-and-forth Black Bracket opener between Oregon City and Reynolds. The Raiders rallied from a 12-point third-quarter deficit to get the two-point victory.

“This game was really fun, coming back like we did,” Buffington said. “We started our game with our heads down, with a big deficit, but we came back, and it was so fun to get transition baskets, take the lead and win the game.”

“I appreciate that we got to do this,” Coleman said with a smile.

Reynolds improved to 5-10 this season. The Raiders will next be in action Wednesday, when they face Sunset (a 66-47 winner over McDaniel) in a Black Bracket semifinal at 5:30 p.m. at Tigard High School.

“We were coming into this tournament off of a win (85-70 over Sandy),” Buffington said. “We were just trying to keep the momentum going and hopefully make it four games in a row and win this tournament.”

“It’s a big win for us, because we haven’t won four games in a row since I moved to Oregon four years ago,” Coleman said. “Our goal is to win four in a row.”

Getting that second straight win was anything but easy.

Oregon City, with senior Alex Newkirk scoring nine first-quarter points, and with freshman Dylan Westermeyer and senior Dominic Loeb each adding a three-point basket, sprinted to a 15-3 advantage on its way to claiming a 17-9 lead at the end of the opening period.

Reynolds started to battle back early in the second quarter. Coleman opened the period with a three-pointer, and junior Chase Baldwin followed with a basket on a drive to the hoop, cutting the Oregon City lead to 18-14 with 5 minutes and 17 seconds before halftime.

The Raiders tied the score, at 21-21, when Coleman sank two free throws with 2:45 remaining in the quarter. Oregon City quickly answered with a three-pointer by freshman Deon Best on its way to grabbing a 27-23 halftime lead.

The Pioneers, and Newkirk, came out on fire to open the second half. Newkirk scored eight consecutive points to start the third quarter, giving Oregon City a 35-23 lead with 5:11 remaining in the period.

But that’s when momentum changed — in a very big way. Reynolds responded with a 16-0 run in a span of 3:49. Buffington scored 11 points during the run. His layup, following a steal by Reynolds junior Alex Hendrickson, gave the Raiders a 39-35 lead with 1:30 left in the period.

Reynolds took a 41-36 lead to the fourth quarter.

Oregon City rallied in the final stanza, tying the score at 44-44 on a layup by Best with 5:23 to play. But the Pioneers weren’t able to recapture the lead. Coleman scored six points in a span of 1:05, helping Reynolds take a 50-45 lead with 4:06 remaining.

The lead was 51-45 after a free throw by junior Jovany Guzman with 2:43 left. But things were far from decided.

Best sank a three-pointer from the left corner. After four made free throws by Reynolds, Newkirk converted a four-point play, making the score 55-52 with 10.9 seconds remaining.

But the Raiders withstood the pressure, as sophomore Scotty Riddle went 2 for 2 from the free throw line, making the score 57-52 with 7.1 seconds remaining. A last-second three-pointer by Best made the final score 57-55.

“We just tried to switch up our press a bit and get more aggressive, because we knew they couldn’t handle the pressure,” Buffington said of the key third-quarter run. “We got steals, which led to fast-break layups, and that’s what got us back in the game.”

“Our coach (Terrance Dickens) was telling us the whole game to be more aggressive,” Coleman said. “At halftime, I tried to motivate the guys, and we came out, got a lot of steals and came back.”

Buffington led the way for Reynolds with 21 points, including 15 in the second half. He had six rebounds and two steals. Coleman had 19 points and three steals.

Reynolds made 19 of 41 shots from the field, with four three-pointers, and 15 of 25 free throw attempts. The defense helped force Oregon City into 20 turnovers.

Newkirk had a strong game for Oregon City, leading all scorers with 27 points while also having 12 rebounds and four steals. Best scored 12 points. Senior Gibsen Payne had nine rebounds and three steals to go with five points. Westermeyer, Loeb and senior Zach Winkel each added three points for the Pioneers.

Oregon City made 19 of 51 shots from the field, with nine three-pointers, and 8 of 17 free throw attempts.

Oregon City moved to 5-6 this season. The Pioneers will next be in action Wednesday, when they face McDaniel in a consolation semifinal at 2 p.m. at Tigard High School.

The Black Bracket championship game will be Thursday at 7 p.m. at Tigard High School.