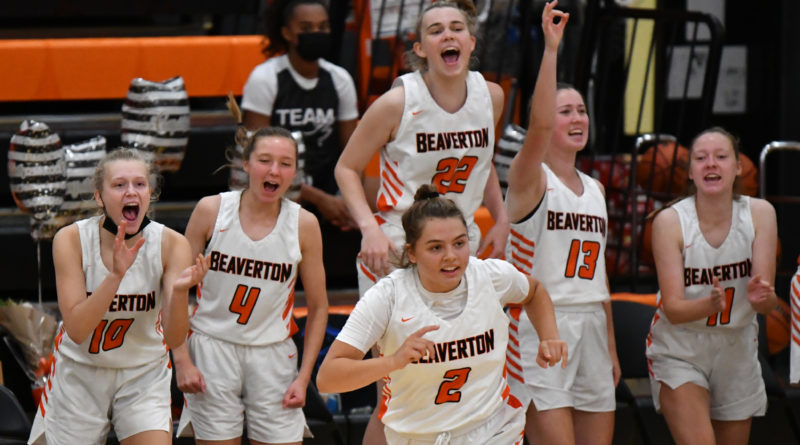 The Beaverton girls basketball team knows, maybe better than anyone, that you can never take anything for granted.

Last year, the Beavers looked well on their way to possibly claiming the Class 6A state championship, only to see that opportunity taken away because of the COVID-19 outbreak.

So, this season, Beaverton is cherishing every single moment — and the Beavers aren’t taking anything for granted. They certainly didn’t take their game with Mountainside for granted, and that turned out to be a good thing for Beaverton, as it had to battle hard before pulling away late to get a 47-38 win over the persistent Mavericks in a Metro League finale played in front of a Senior Night crowd Friday at Beaverton High School.

“It’s a super big win. It’s Senior Night in a season we weren’t sure that we were going to have, and that’s a great team, so, all around, it’s a really big win,” senior post Alexa Borter said. “Just with the crazy year we’ve had, and not having a regular season, it’s just so special to be here one last time to play.”

“This meant a lot,” said senior guard Mackenzie Naro, who scored a game-high 14 points. “It was really nice to finish with a win, and it was nice to finish in a really positive atmosphere.”

“We’re absolutely enjoying each other, and celebrating every moment we have together,” Beaverton coach Kathy Naro said.

The Beavers finished Metro League play with a league-best 7-1 record while improving to 12-2 overall.

“It’s super special, especially since last year we didn’t get to play in the state tournament, and to do that again, with a different group of girls, is really special,” Borter said of the Metro League title.

Last season, Beaverton claimed the Metro League championship at 12-0, while going 23-4 on the season. The Beavers were the No. 1 seed in the playoffs, and they opened the Class 6A state tournament with a 37-26 win over Metro League rival Southridge. They were set to face Liberty in a semifinal, but that game, and the rest of the tournament, was canceled.

“It feels good to come back,” Mackenzie Naro said. “We want to play the best we can for the seniors that we have, because we know that it can go away.”

With a mostly new varsity roster, the Beavers haven’t seemed to miss a beat this year.

“Our senior leadership has been incredible,” Kathy Naro said of the group that includes Mackenzie Naro, Ella Baker, Sydney Pfleiger, Maddie Remensperger, Borter and Tyler Shank. “We’ve got some great seniors and some young kids who’ve stepped into some big roles. So, it’s exciting.”

“The younger girls are amazing,” Alexa Borter said. “They’ve come in and fit in so well, and they’ve really taken over the team, and I know they’ll do great things next year.”

“Four of those girls from last year are playing in college,” Kathy Naro said. “The girls that have stepped in and filled their shoes are doing a really great job.”

While having talented younger players able to step right in has been key to Beaverton’s continued success, the squad’s determination, motivation and appreciation also have been crucial.

“This year, we just wanted to try to get back what we lost last year,” Alexa Borter said. “We lost a ton of great seniors, so our goal this year was to come out and just shock a lot of people.”

“They’re all just working really hard, they’re doing the little things, and they love the game,” Kathy Naro said. “It’s a credit to how hard they work, and they’re really good to each other.”

Beaverton started an all-senior lineup in Friday’s game, and the fired-up Beavers took a quick 2-0 lead when Baker made a layup off a pass from Remensperger in the opening minute. Mountainside, getting a basket on a drive by junior guard Taylor Smith and a free throw by junior post Lindsey Wilson, rallied to take a 3-2 lead with 4 minutes and 45 seconds left in the first quarter.

Beaverton, getting a three-point play from Spear and a three-point basket from Mackenzie Naro, took an 8-5 lead to the second quarter.

The Beavers kept rolling from there. Zoe Borter opened the period with a three-pointer off an assist from Mackenzie Naro. After a basket by Wilson, Alexa Borter scored four consecutive points, giving Beaverton a 15-7 lead with 4:55 remaining in the half.

But the Mavericks, with Wilson scoring six points in the final 4:32 of the period, trimmed the Beaverton lead to 17-15 at halftime.

Mountainside continued its rally in the second half. Wilson sank two free throws to open the scoring in the third quarter, tying the score at 17-17. Beaverton responded with an 8-0 run, which included back-to-back three-pointers from Zoe Borter and Mackenzie Naro, both coming off assists from Spear, giving the home team a 25-17 advantage with 4:59 left in the period.

Again, Mountainside came battling back. The Mavericks got a couple of three-pointers from junior Carly Stone and one by sophomore Polly Raugust, cutting the Beaverton lead to 31-30 entering the fourth quarter.

The Mavericks took their first lead since the game’s opening minutes, at 32-31, when sophomore Halle Hageman scored on a drive in the paint with 7:29 to play.

Beaverton regained the lead, 34-32, when Spear sank a three-pointer from the left side, off an assist by Madison Naro. Mountainside tied it when Hageman went 2 for 2 from the line with 6:47 remaining.

That’s when the determined Beaverton squad took over. The Beavers, behind their swarming defense and clutch shooting, went on a 10-0 run. Beaverton got three-pointers from Madison Naro and Mackenzie Naro, followed by four free throws by Zoe Borter, to open a 44-34 lead with 1:11 remaining.

“I think we just came together,” Mackenzie Naro said. “At halftime, we had a really good talk. We were like, ‘Let’s pick it up, let’s come together for Senior Night,’ and we did. Our defense improved. It was a tough game. They’re really good.”

“It didn’t go how we wanted it to, necessarily. I thought it was really choppy. We missed a lot of layups, and offensively we were pretty stagnant against their zone, so those are things that we’ve really got to work on,” Kathy Naro said. “We showed some poise, and we hit some big shots when we needed to, but there’s a lot for us to work on. It was a great learning experience, and Mountainside did a really good job. They hit some shots, and their zone was really effective.”

Beaverton made 16 of 44 shots from the field, with seven three-pointers, and 8 of 13 free throw attempts.

The Beavers next will be in action when they play in the loaded Maroon Bracket, which could easily be looked at as the unofficial state-championship bracket, during culminating-week tournament play. Beaverton will open the tournament Tuesday, when it faces 12-1 Tualatin in a game starting at 7 p.m. at Grant High School. Other teams in the Maroon Bracket are unbeaten South Medford, Sheldon, Jesuit, West Linn, Clackamas and Wilsonville.

“We’re treating it like the (state) tournament. We’re coming in ready to go, and hopefully we’ll do well,” Mackenzie Naro said. “We hope to win it, if we all play well. There are some great teams there. We just have to play as a team. If everyone plays well, and we all come together, we’ll do good. But, if we start going on our own, then we won’t do as well as we can.”

“We’re just going to play our best basketball. Obviously, we want to win games, but we’re just excited to get to play together for another week,” Alexa Borter said. “You always want to play the best competition, and that’s what this is. There are going to be some really big games.”

“We’re very excited,” Kathy Naro said. “It’s going to be really fun. I think anyone can beat anyone.”

Mountainside, which had an all-junior starting lineup Friday and just two seniors on the roster, moved to 6-4 in Metro League play (8-6 overall), putting the Mavericks in a tie with Westview for third place in the final league standings.

Wilson, despite battling foul trouble, led the Mavericks with 11 points. She had five rebounds, including four on the offensive end. Hageman had 10 points and three rebounds. Stone had six points and two steals. Junior Shaylee Gonzalez added four points.

Mountainside made 14 of 43 shots from the field, with three three-pointers, and 7 of 13 free throw attempts.

The Mavericks will be playing in the White Bracket during culminating-week tournament play. Mountainside will open Tuesday against Lakeridge, starting at 5:30 p.m. at Roosevelt High School. Other teams in the White Bracket are Grant, Sherwood, Wells, Barlow, McNary and Benson.