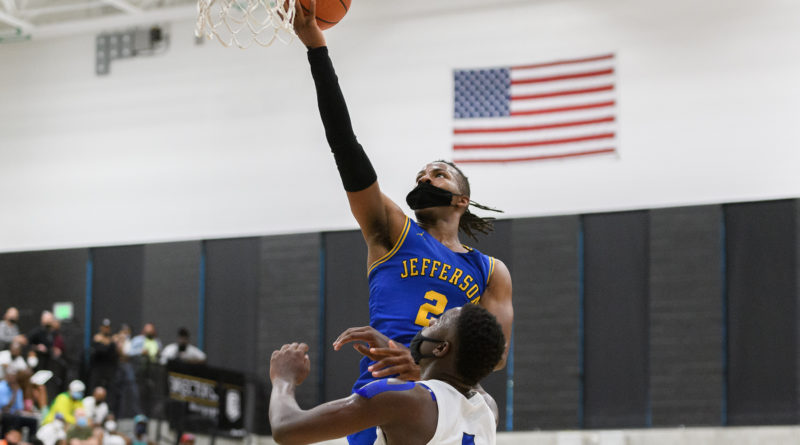 PORTLAND — With three losses in its past five games, the obvious question surrounding powerhouse Jefferson was, what’s going on?

The perennial state title contender entered Friday with tough defeats to Central Catholic, Cleveland and Roosevelt over the past two weeks. Not exactly the type of basketball this program is used to.

“We were just a little shaken,” Jefferson sophomore Mookie Cook said. “We weren’t together all the way.”

Coach Pat Strickland said there were no excuses for his team’s recent play.

“We can be beat,” Strickland said. “But my guys got to learn and understand that we’re Jefferson, so every team is gonna come with their best game with a lot of energy. When we have the power like we do and we match the other team’s energy, we always have a chance to win, but we haven’t always been matching the energy.”

Led by Cook and junior Lamar Washington, the Democrats got back to who they are by taking down rival Grant, 60-53, to close PIL play at Grant High School.

Cook proved why he’s one of the best sophomores in the country — ranked No. 14 nationally by 247Sports and No. 15 by ESPN in the Class of 2023. The 6-foot-7 forward was consistent on both ends, finishing with 16 points and six rebounds, plus multiple blocks that changed the momentum on the defensive end.

Washington shined throughout the contest, totaling 23 points and 12 rebounds, including back-to-back dunks to end the first half and give Jefferson a 30-25 lead at halftime. He scored 10 points in the fourth quarter to help hold off the Generals.

“We’re both best friends, so it’s good for our communication on the court,” said Washington, a 4-star prospect in football who is leaning toward playing basketball in college. “We know when it’s each other’s turn, like, ‘Hey, bro, you’ve got a mismatch, you go.’ If I’m feeling it, I’ll go. It’s natural — it’s so natural with us.”

Said Strickland: “It’s great to have players like them to take over the game. But sometimes, they may take over a little too much. But it’s great to have them because they play both sides of the ball. They both do everything and it’s a pleasure to have.”

After facing an early eight-point deficit, the Democrats clamped down defensively and held Grant to 17-of-53 shooting (32.1 percent) for the game. Jefferson stretched its lead to 14 points in the fourth quarter to cruise late — a far cry from the teams’ first meeting, when the Democrats needed Cook’s game-winning three-pointer at the buzzer to stun Grant on May 27.

“We take pride in our defense,” Washington said. “We want to turn it into offense. Get the rebound, get out and play the fast break. That was our game plan coming into tonight.”

Sophomore Adrian Mosley led Grant with 22 points and is a building block for the program over the next two years.

Mosley said he wasn’t disappointed with the loss and knows there’s a lot of work to do.

“We’re a pretty young team — only about three seniors,” Mosley said. “We’ve just got to start working out as a team and start bonding for next year, when there’s actually a state championship (to play for).”

For Jefferson, one big question is what happens next season, after the program potentially loses Cook and Washington, who plan to transfer to national powerhouse AZ Compass Prep in Chandler, Ariz.

Strickland isn’t ruling out them returning just yet.

“It’s a possibility (because) they’re not there yet,” he said, laughing.

Washington said the move is to ensure they have a full basketball season to play next school year.

“If it happens, it happens,” Washington said. “You know, we’re just looking at all our options. With COVID going on, we didn’t know if we were going to have a season, so we had to make sure we had an option for next year, in case we didn’t have anything.”

Cook had a simpler answer with regard to a possible return to the North Portland school.

Oregon coach Dana Altman and a UCLA assistant coach were in attendance at Friday’s game. As of now, Cook said his recruiting process is “pretty open.”

“It’s a blessing, man,” Cook said. “Not a lot of people have this, so it’s a blessing. I just have to stay hungry and just keep working.”

Strickland called Cook “the best sophomore” he’s had at Jefferson, which is big praise after having coached Terrence Jones and Terrence Ross — who both reached the NBA.

“If I have to say right now, as a young one, Mookie is definitely the best,” Strickland said.

Next, Jefferson and Grant enter next week’s 32-team culminating-week tournaments consisting of Class 5A and 6A teams. Four eight-team brackets were created with each team guaranteed three games.