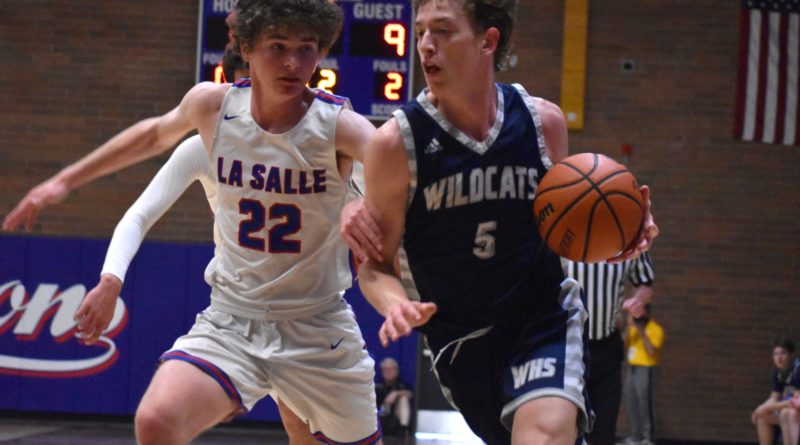 MILWAUKIE — Wilsonville senior Riley Scanlan could not be stopped Friday night, as the Wildcats knocked off La Salle Prep 48-35 to complete a perfect run through the regular season.

Scanlan broke the game open in the third quarter, driving the baseline and rebounding his miss from the other side of the hoop and going back up for a contested two points. On his next trip down the court, Scanlan sank a corner three-pointer despite getting knocked to the floor.

Early in the fourth quarter, Scanlan made an emphatic jump stop along the baseline and hit a 10-footer over the top of a defender.

The Wildcats saw their two-point halftime lead expand to a double-digit margin, which they would carry through most of the fourth period.

“My teammates did a great job passing and screening and putting me in a position to score,” Scanlan said.

He finished with a game-high 33 points, including all nine Wilsonville baskets in the second half.

After getting out to an early lead, La Salle Prep was held to single digits in each of the last three quarters.

“We wanted to force them into bad shots and limit them to one opportunity,” Wilsonville junior Enzo Chimienti said. “We competed hard and locked in on what we needed to do.”

The Falcons found themselves up 13-9 early in the second quarter after big man Jacob Owens hit a three-pointer from the left side, holding his follow through as he trotted down the sideline to the defensive end.

“That’s a good team over there,” Wilsonville coach Chris Roche said. “We could have gotten buried early, but the guys hung in there and did a good job staying with the game plan.”

La Salle Prep maintained the upper hand when a series of double teams eventually forced a turnover. Finbar O’Brien scooped up the loose ball and fired it down the floor, hitting Owens in stride for a layup at the other end.

But the Wildcats would sneak in front heading to halftime, snagging a lead they would never relinquish.

The Falcons were holding for the final shot of the half when Wilsonville freshman Kallen Gutridge got into a passing lane and beat the clock to the other end for a three-point play with a split-second on the clock.

“I saw that they were really spread out, and I was ready for a cross-court pass,” Gutridge said. “I snagged it and did my best to beat the clock.”

Wilsonville went to the locker room ahead 21-19.

The Wildcats knocked down all 10 of their free throws on the night.

Wilsonville improved to 13-0 — its biggest challenge coming in a one-point win over La Salle Prep on May 24.

“That just shows our competitiveness that no matter what team shows up, we’ve been able to shut them down and get the win,” Scanlan said. “That takes a lot of work, and a lot of focus.”

Wilsonville will play in the Green bracket for next week’s culminating tournaments — a series of eight-team events matching a mix of Portland-Metro schools. The Wildcats open against David Douglas (7-5) at 3:30 p.m. Tuesday at Tigard High School.

“We are grateful to have a culminating event and are looking to make the most of the opportunity we’re being given,” Scanlan said.

La Salle Prep (8-3) will play in the Blue bracket and will face Jefferson (11-3) at 4 p.m. Tuesday at Milwaukie High School.