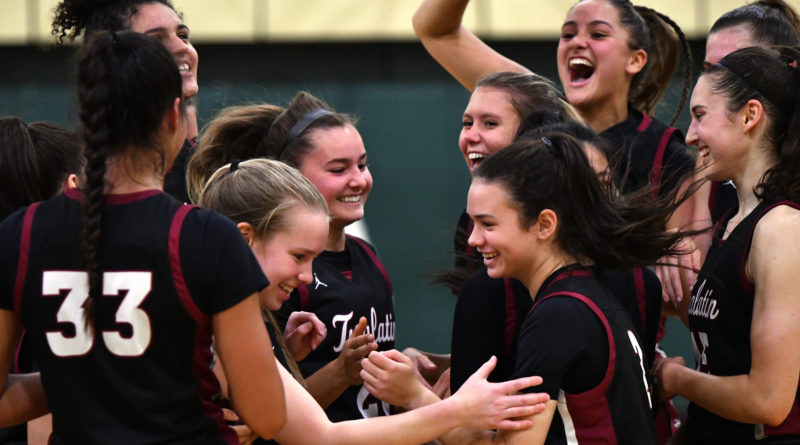 Javernick ended up missing the remainder of the victory against the rival Tigers.

But there was absolutely no way Javernick was going to miss Tualatin’s showdown with West Linn. And she certainly wasn’t going to miss out on the big Timberwolves celebration that started when the final horn sounded.

With Javernick scoring a team-high 12 points, Tualatin took charge in the race for the Three Rivers League championship by earning a 54-36 win over the Lions on Wednesday at West Linn High School.

“I rolled my ankle,” Javernick said, looking back at the Tigard game. “I just rested up, iced it and elevated it, and I knew I had to save myself for this game. It’s a really important game. I really wanted to play in this one, so I did whatever I could to prepare for it and be as ready as I could.

“No, I definitely wasn’t going to miss this one.”

Tualatin improved to 10-1 in Three Rivers League play (11-1 overall), a half-game ahead of West Linn, with each team having one TRL game left.

“It’s a big deal,” said senior post Sidney Dering, who had 11 points in the victory. “We haven’t won (a league championship) since the 2009-2010 season. The seniors were just seven years old then, so it’s a big deal to win it and bring it home to Tualatin. It means a lot to us. That league title is what we were gunning for this year.”

“It’s huge,” Javernick said. “They’ve always been really hard for us. We worked hard as a team and prepared for them, so it was really nice to finally get a win and do it together as a team.”

West Linn played without University of Arizona-bound senior post Aaronette Vonleh, who was nursing a foot injury. The Lions moved to 9-1 in TRL games and 9-3 overall.

“Obviously, we didn’t get the outcome we wanted, but I was really proud of us,” West Linn senior guard Cami Fulcher said. “We didn’t give up, and props to Tualatin, they really played well. We didn’t win, but it was fun playing a good team. We love competing.”

“I thought we stuck it out to the end, especially with our press,” said junior wing Campbell Sheffield, who led the Lions with seven rebounds. “We were being super aggressive and coming up with steals, so I thought that was super good. We were just having a hard time finishing our layups. But the effort was there, and that was good to see.”

Despite not having the 6-foot-3 Vonleh, it was a fired-up West Linn team that took the court at the start of Wednesday’s game. The Lions took their first lead, 6-4, when Fulcher sank a 16-foot jumper with 2:18 left in the first quarter.

West Linn took off from there. Fulcher added a free throw, junior Audrey Kehoe scored on a baseline drive, and senior Payton Shelstad sank a three-point basket from the left corner with 11 seconds left in the quarter, giving the Lions a 12-7 lead at the end of the opening period.

“We were really fired up,” Sheffield said. “We’ve been waiting to play them. We know that they have a pretty tall girl (6-3 senior Natalie Lathrop) and good guards, so we were excited to play them.”

“I’m not really sure why we start so slow sometimes, but once we get the feel for everything and we click, we get good passes, we get tips, layups, and everyone hits their shots,” Javernick said. “Once we get the energy up, it works really well.”

The Timberwolves came roaring back in the second quarter.

With West Linn holding a 14-8 lead following a basket on a driving banker by Shelstad, Tualatin took off behind its defense and energy.

The Timberwolves went on a 10-0 run — which included a foul-line jumper by Javernick off an assist by sophomore Olivia Poulivaati, a three-pointer by sophomore Tabi Searle off a pass from senior Aurora Davis, a free throw by Lathrop, another hoop by Searle and a layup by Lathrop — to take an 18-14 lead with 3:39 left in the second quarter.

“We’ve tried to adjust to not having as many slow starts,” Dering said. “We started practicing our zone (defense) before games. Sometimes, we need to get a feel for the court, and that zone is such a big part of our game. We’re trying to get out of those slow starts, and we’re definitely working at that. But West Linn is a good team. They’ve got some good kids.”

Javernick sank a three-pointer from the left wing, coming off a pass from Searle, and Tualatin junior Brook Burke scored five consecutive points, helping the Timberwolves claim a 26-18 halftime lead.

For the quarter, Tualatin shot 7 for 11 from the field, while West Linn made 3 of 12 shots against the Timberwolves’ defense.

“It was our energy. That’s a big deal for us,” Dering said. “Everyone plays a role on this team. We need that encouragement; we need that constant energy. I think that energy shifted. We made some stops on defense, and we saw our offense a little better.”

Tualatin kept momentum on its side early in the third quarter. Dering scored four straight points to open the period, then she assisted on another three-pointer by Javernick. After West Linn ended the 7-0 run with a basket on a jumper by Fulcher, Searle scored four points in a row, giving the Timberwolves a 37-20 lead with 3:56 remaining in the period.

West Linn trimmed the deficit to 41-29 entering the fourth quarter, with Shelstad scoring five points, including a three-pointer, and with Sheffield sinking a foul-line jumper.

The Lions got the margin to 10, at 46-36, when Shelstad swished a 10-foot jumper with 4:18 to play. But West Linn didn’t get any closer. In fact, the Lions didn’t score again against the Tualatin defense.

The Timberwolves, getting a follow-up hoop by Lathrop, a basket by Javernick, a layup by Poulivaati following a steal by Searle, and two free throws by Davis, pulled away for the 54-36 win — igniting a Tualatin celebration.

“This was so much fun,” Javernick said.

In her return to action, Javernick had seven rebounds and three steals to go with her team-high 12 points.

“I was really excited for tonight,” she said. “I was ready to get out there and do what I can for our team.”

Dering scored all 11 of her points in the second half. She had four rebounds and three assists.

“I was just trying to finish my shots,” she said. “We got good possessions to score. We were looking for those post-ups.”

Tualatin made 20 of 37 shots from the field (four three-pointers) and 10 of 14 free throw attempts. The defense helped force West Linn into a 15-for-53 shooting night from the field.

“We love our zone,” Dering said. “We love making plays off of that. We’re getting tips and steals, and that’s a good thing for us.”

“This means everything. Basketball has been such a great outlet for me, and being around these girls and these coaches has been so amazing. I’m just really thankful that it happened,” Fulcher said of her senior season. “Tualatin is a great team, and we’re a great team. We knew not to give up on each other. I’m just proud of us for never giving up.”

Sheffield had seven points to go with her nine rebounds.

“I was fired up,” she said. “I knew we all had to rebound more, because Aaronette is a big part of our team, and she rebounds a lot, so we knew we had to pick it up for her.”

Kehoe had four points for the Lions, and junior Isabella McVicker scored two.

Tualatin and West Linn will be playing in the loaded eight-team culminating-week tournament which starts Tuesday at Grant High School. The winner of that tournament — which also includes South Medford, Sheldon, Beaverton, Jesuit, Clackamas and Wilsonville — could make the claim of being the unofficial state champion.

“We’re really excited for it. That’s a big thing for us. We want to win state this year,” Dering said. “A league title and a state title would really be the cherry on top for us seniors, for our last year.”

The Timberwolves know that achieving that goal won’t come easy.

“We’re going to keep working hard in practices and prepare,” Javernick said. “I know we’re all super excited to work really hard and see how far we can go.”

West Linn also is taking high hopes to the event.

“I’m so excited for that. I know the whole team is. It’s so fun playing good competition. We’ve lost to South Medford and Sheldon, so I think we’re looking to get a little revenge. We want to win,” Fulcher said. “We need to capitalize on our steals. Our transitions need to be a little quicker, and we need to play together and get the ball to where we need to. We’ll definitely learn from this game. While we didn’t win, I’m definitely excited to learn and get ready for the tournament.”

“We’re looking forward to it,” Sheffield said. “We’re going to be playing some really good teams. We’re just hoping to win and play as a team. We’re hoping that Aaronette will be back. We’re just going to take it one game at a time.”

West Linn will open the tournament with a first-round game against Jesuit on Tuesday. Tualatin will face Beaverton in a first-round contest.

But first, the Lions and Timberwolves will finish their Three Rivers League schedules with games Friday. Tualatin, needing a win to clinch the league title, will play host to Lake Oswego at 7:15 p.m. West Linn will play at Oregon City at 7:30 p.m.