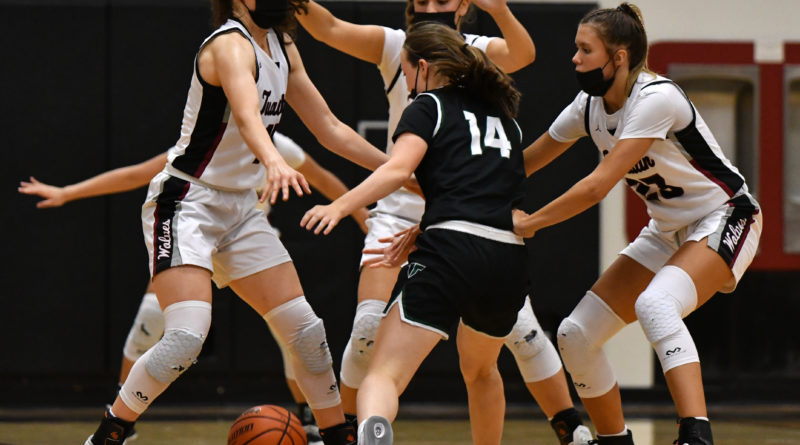 The Tualatin girls basketball team didn’t have a good shooting night from the field.

The Timberwolves also watched their rivals from Tigard jump out to a quick 5-0 lead.

As it turned out, neither of those things mattered at all — not even close.

Tualatin made sure of that, thanks to its defense.

The Timberwolves, behind their relentless, swarming, pressing, trapping defense, powered their way to a 53-17 win over the Tigers in a Three Rivers League game Friday at Tualatin High School.

“It was really good. It’s always good to beat your rival,” said Tualatin senior post Natalie Lathrop, who had 12 points and 11 rebounds. “The first two years, for us seniors, they destroyed us … these last two years, we’ve done the same to them, and it felt really good.”

“We really wanted to beat them, obviously, because they’re our rival,” said Tualatin senior guard Aurora Davis, one of four Timberwolves to score in double figures. “For the seniors, it was our last game against them, so it was a good win.”

“The first two years, going 0-4 against them, and then finishing 4-0 is a great feeling,” said Tualatin senior Sidney Dering, who had four steals to help key the big defensive effort. “They’re our cross-city rivals, so it’s a big thing for us, and we love beating Tigard.”

Completing the season sweep against the rival Tigers has been just one of many highlights this spring for Tualatin. With the victory, the Timberwolves, who returned all five starters from last season’s squad that went 19-7, improved to 8-1 in Three Rivers League play and to 9-1 overall.

Tualatin, especially the five seniors on the team, now has high hopes for the rest of the season.

“We’re all really grateful that we get a senior year,” Lathrop said. “Now, I think we’re looking to go all the way, and whatever happens in that culminating week, we want to do really good there. We want to end our senior season doing really well.”

“We want to win state,” Dering said, referring to the eight-team tournaments set for the culminating week. “That’s our big goal. We want to get into that top bracket and make some moves up there. It’s been emotional. It’s the last time the five of us (seniors) are playing together, and we’re super close — the rest of our team, too. We’re trying to have a final big ride.”

“Obviously, our goal would be to go all the way and win state,” Davis said. “But we’re taking it one game at a time, and we’re working hard to get better each day.”

That hard works seems to be paying off for the Timberwolves — especially on the defensive end of the court.

In the win over Tigard, Tualatin’s swarming defense helped force the Tigers into a 7-for-27 shooting night from the field, while also coming up with 29 turnovers.

“It’s been awesome. We work on it a ton at practice,” said the 6-foot-3 Lathrop, who anchors the back line of Tualatin’s zone defense. “Everyone has their positions that they do, and everyone works super hard to get steals and to get tips, and it makes it really hard for the other team to score and get into a rhythm. It definitely is something we take pride in. We spend a lot of time in practice working on it and making sure whatever offense the other team runs, we can guard it.”

“Our zone puts us in the right place to get those steals,” Dering said. “The top of our zone (featuring sophomores Tabi Searle and Olivia Poulivaati and senior Teagan Gaviola), and obviously with our press (with Dering, Davis and senior Kasidy Javernick causing havoc), have been really good. We’re scoring off of our press — that’s huge for us. We play our best when we’re in transition, and our zone helps us with that.”

Tualatin is allowing an average of 27 points per game, the top mark in Class 6A.

“That comes from (Tualatin head coach Wes) Pappas,” Dering said. “The defense sets us up for success, and it’s something that we really take a lot of pride in. We give up the lowest points in the state, and that’s a big thing for us. That’s a huge goal for us.”

In Friday’s game, Tigard, also seemingly fired up for the rivalry contest, got off to a fast start. The Tigers, getting a basket on a jumper by junior post Sarah Lamet and a three-pointer from junior Alyssa Moore, grabbed a 5-0 lead with 7 minutes left in the first quarter.

That’s when the Timberwolves, and their defense, came to life.

Tualatin allowed Tigard to score one more point, while forcing nine turnovers, the remainder of the opening period. The Timberwolves got a short-range basket by Lathrop, a layup by Poulivaati following a steal by Searle, a jumper by Dering and a three-pointer by Davis, coming off a pass from Dering, to claim a 9-5 lead with 2:35 to play in the quarter.

Tualatin added two free throws by Lathrop and a steal and layup by Dering to take a 13-6 lead to the second quarter.

That’s when the Timberwolves seemed to turn up the intensity even more. Tualatin went on a 14-0 run to open the period. The run included three consecutive baskets by Searle, with two of those coming after steals and passes by Poulivaati.

A short-range banker by Lathrop capped the run and gave Tualatin a 27-6 advantage with 2:34 left in the quarter. Tigard answered with two baskets by Lamet, making the score 27-10 at halftime.

The Tualatin defense didn’t let up in the second half, as the Timberwolves allowed one point in the third quarter. Lathrop went 4 for 4 from the line, and Davis connected on another three-pointer, helping Tualatin build the lead to 42-11 entering the fourth quarter.

Searle scored four points in the final period, and Davis added another three-pointer, as the Timberwolves closed out the 53-17 victory.

“It’s been great. We’ve had an awesome season so far,” Dering said. “We’re groovin’ and rollin’ back in our zone. It’s been good being back, and we’ve got some big games coming up, and we’re excited about that.”

Searle led a balanced scoring attack with 14 points. Lathrop had two blocked shots to go with her 12 points and 11 rebounds. Davis had 11 points, six rebounds, three steals and three assists. Dering had a strong overall game with 10 points, seven rebounds, four steals and two assists. Poulivaati, who missed her freshman season because of a knee injury, had four points, three steals and three assists. Junior Brook Burke added two points for the Timberwolves.

Tualatin made 22 of 58 shots from the field, with three three-pointers (all by Davis). The Timberwolves were 6 for 6 from the line and committed only six turnovers.

Tualatin will be back in action Monday, when it plays at St. Mary’s Academy in a Three Rivers League game starting at 7:15 p.m. On Wednesday, the Timberwolves will play at league-leading West Linn (8-0 in TRL play) at 7 p.m. in a game that could decide the Three Rivers League championship.

“We’re really looking forward to it,” Lathrop said of the showdown with the Lions. “The West Linn game is always a challenge. They’re a really good team, and it’s fun for us to play them, and it’s a good measure of how well we’re doing.”

“That’s a big one for us,” Davis said. “We’re getting ready for that one, for sure. We’ve been working on some stuff. It’s going to come down to hard work.”

Tigard moved to 2-6 in TRL play, putting the Tigers in a tie with Canby for sixth place in the league standings.

Tigard will be back in action Monday, when it plays host to Lake Oswego in a league contest starting at 5:30 p.m.