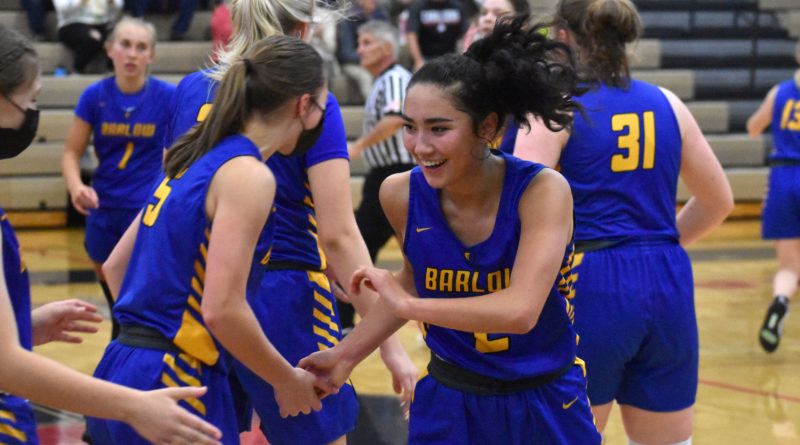 CLACKAMAS — The Barlow girls basketball team is saving its best for last, going on the road and handing Clackamas its first league loss, 64-58, on Friday night.

The Bruins (8-3) ran their Mt. Hood Conference win streak to seven games with the season-ending tournaments on the horizon.

The Bruins played with a lead most of the way, responding to a series of Clackamas challenges to maintain the upper hand during a pivotal stretch of the third quarter.

Cavaliers senior Maddie Tacheny turned and buried a shot from the block to bring her team even two minutes into the second half. Barlow’s Annie Koenig answered with a three-pointer from the top of the arc.

Clackamas guard Rhyan Mogel, who pulled herself off the free throw line with a sore shoulder in the first half, sank a three to tie the score again. Koenig came back with two free throws to push Barlow back in front.

Mogel drove the lane and converted a layup to tie the score at 30-30, but Barlow would not be denied. Melanie Hiu got knocked to the floor on a three-point try and swished all three of her free throws to put the Bruins in front to stay.

“We really wanted this game, and we worked hard to stick together,” Koenig said. “We had each other’s backs.”

The game also marked the first of the season for Barlow sophomore guard Kennedie Shuler, who has been recovering from a soccer injury. She knocked down a couple of deep balls and finished with eight points after coming off the bench in the first quarter.

“We went into tonight looking to see how her ankle felt, and she did a good job of picking her spots to attack,” Hudson said.

She contributed to a key buzzer-beater when she took a couple of dribbles near the top of the arc, drew the defense and sent the ball to Koenig for an open three-pointer that put the Bruins up 41-37 heading to the fourth quarter.

“It took me a couple minutes to calm down, but there was no better feeling than getting back out on the floor,” Shuler said.

The Bruins sank four three-pointers early in the fourth quarter, two by sub Olivia Payne, to take command of the game 54-45 with 3:48 to play.

“She’s fearless, and she plays hard no matter what,” Hudson said. “I’ve been telling her to be ready because she was going to get her chance, and she did tonight.”

Clackamas freshman Ella Shackleton hit a three-pointer that cut the margin to five with 1:25 to play. The Cavaliers put on the pressure defense and got a hand on the ball twice — only to see a loose ball sail out of bounds.

“Those are opportunities for what could have happened — the kind of plays that will keep me up at 3 in the morning,” Clackamas coach Korey Landolt said. “But I’m proud of the effort the girls kept bringing.”

With less than a minute on the clock, the Cavaliers had to resort to purposefully fouling. The Bruins went 10 for 10 from the line down the stretch.

“It was about practice and focus, and the shots will go in,” Koenig said.

Barlow can claim a share of the Mt. Hood Conference title by winning out next week, combined with a Clackamas (9-2) loss at Central Catholic (7-4) in next Saturday’s regular-season finale.

Clackamas got three-pointers from Bella Garcia and Eliza Buerk to shoot out to a quick 6-0 lead. The Bruins took a 17-12 lead at the end of the first quarter after Lindsay Barden fired a pass to Rilyn Quirke, who sent the ball to freshman Kylie Ihrig for a three-point try at the horn. Ihrig was fouled on the attempt and went to the line alone, where she sank 2 of 3.