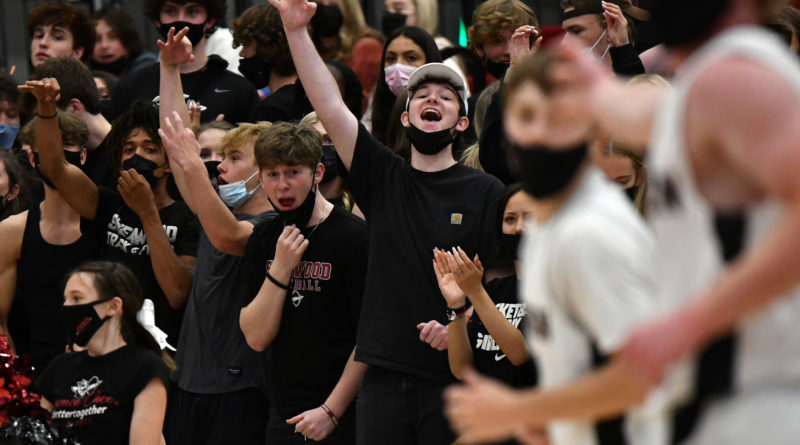 The Sherwood boys basketball team now finds itself firmly in the driver’s seat in the race for the Pacific Conference championship.

But getting there wasn’t easy — not even close.

In fact, getting there was an all-out battle that wasn’t decided until Bowmen senior Caden Davis snared the rebound after a last-second, potential game-winning Newberg shot bounced off the rim.

Sherwood, with Pacific Conference supremacy at stake, held off the Tigers to get a hard-fought 47-46 victory in a gritty, back-and-forth conference showdown Tuesday at Sherwood High School.

“This gives us a huge shot to get three in a row in our league,” Davis said following the Bowmen post-game celebration. “This was a big game for the title, and it means a lot, because we’ve been working our way for months. Even before the season started, we’ve been working on tennis courts, doing sprints, and it’s paying off for us.”

“It’s awesome,” said Sherwood senior guard Joey Summers, who came off the bench to lead the Bowmen with 14 points. “For me, coming here and being new with the team, playing with these guys has been the most awesome year of basketball I’ve ever had.”

“We came in knowing that they’re the second-best team in the league,” Sherwood senior guard Asher Krauel said. “We knew that it was going to be an important game in the conference.”

With the win, Sherwood, going for its third consecutive Pacific Conference title, improved to 8-0 in conference games (10-1 overall), keeping the Bowmen alone in first place with three games to play. Newberg, which entered on a three-game win streak, moved to 7-2 in conference play. Both losses have come against Sherwood — by a total of five points.

“It’s a big thing for us,” Davis said of a possible Pacific Conference championship. “It’s a lot of what we’re playing for. We don’t have a big 32-team state playoff this year. So, this is our main goal right now.”

“It’s important, especially since we’ve had a legitimate season taken away (because of the COVID-19 pandemic),” Krauel said. “So, we want to make the most of this and win the league championship.”

While Krauel and Davis have been part of the past two Bowmen league title teams, it’s something new for Summers, who joined the squad this season after moving to the area from Reno, Nev.

“Honestly, it’s a dream,” Summers said. “Because I’m not used to winning all the time. It’s just amazing.”

While Sherwood was eyeing its third straight league crown, Newberg had title aspirations of its own — and the Tigers showed that right from the start.

Newberg, after two free throws by senior Spencer Lanier and a basket on a leaning bank shot by junior Sol Byles, grabbed a 12-6 lead with 2 minutes and 37 seconds left in the first quarter.

Sherwood, with junior Baydon Kullowatz scoring the final five points of the period, cut the Newberg lead to 12-11 entering the second quarter.

The Bowmen took their first lead, at 13-12, when Summers scored on a zig-zagging drive in the paint, coming with 7:28 before halftime.

Summers provided most of the offense for Sherwood in the period, sinking a couple of three-point baskets and scoring 10 points in the quarter.

“Our team moves the ball, and we all trust each other, and I tried to get to the paint,” Summers said.

Still, the Bowmen couldn’t pull away from Newberg, which got two clutch three-pointers from senior guard Vaibhav Brooks in the period.

There were eight lead changes in the second quarter, with the final lead change coming when Newberg senior Corban Muthiah sank a buzzer-beating three-pointer from the left corner, giving the Tigers a 29-28 advantage at the break.

Sherwood struggled some on the offensive end in the first half, but the Bowmen came out determined in the second half to make up for that on the defensive end of the court.

Newberg made just 2 of 13 shots from the field against the swarming Sherwood defense in the third quarter. The Bowmen, with Davis scoring six points in the period, rallied to take a 38-34 lead to the fourth quarter.

That’s when things really got intense.

Newberg opened the scoring in the final stanza with a basket on a drive by Byles. Sherwood responded with a hoop on a short-range jumper by senior Max Smith, followed by a spectacular basket on an off-balance shot on a drive by Summers, giving the Bowmen their biggest lead, at 42-36, with 6:52 remaining.

But that didn’t last.

Newberg quickly answered, getting a basket by junior Sam Murphy, coming off a pass from Muthiah, two free throws by Lanier, and a swishing 17-foot jumper by Byles, tying the score at 42-42 with 2:53 to play.

Sherwood, after eating some time off the clock, regained the lead, at 44-42, when Davis connected on a pull-up jumper with 1:49 remaining.

Newberg misfired in its ensuing possession, with Krauel grabbing the rebound. The Tigers, with only two team fouls at that point in the half, quickly fouled Sherwood five times, sending Krauel to the free throw line, where he faced a one-and-one bonus situation. Krauel sank both foul shots, making the score 46-42 with 54.2 seconds left.

Murphy and Davis traded free throws, leaving the Bowmen with a 47-43 advantage with 26.1 seconds to go. But there was still plenty of drama to come.

Byles sank a three-pointer from the right side with 11 seconds remaining, trimming the margin to 47-46. After a timeout, Krauel was fouled with 9.1 seconds left. He missed on the front end of a one-and-one, with Newberg senior Carter Stone grabbing the rebound.

The Tigers quickly got the ball up court, getting a 10-foot jumper as time was running down. The ball hit the back rim, with Davis grabbing the rebound as time expired, wrapping up the victory — and a clear path to the conference title — for the Bowmen.

“League champs — that was what was going through my head,” Davis said of his thoughts when he pulled in that final rebound. “But I was just happy that we pulled through. I was happy that shot missed. We missed a ton of gimme layups, but that didn’t matter.”

“It was awesome,” Summers said. “We were out there, we were all hooping, so it was a blast.”

“It was super fun,” Krauel said. “It was super intense, and a great team win. Every person contributed, and that’s the best-case scenario.”

In addition to Summers’ 14 points, Sherwood got 11 points, three rebounds and two steals from Davis.

Kullowatz scored seven points, all coming in the first half. Krauel, while having an off shooting night, scoring six points, contributed with nine rebounds, two assists and some solid defense.

“My shooting was a little off tonight, but defense can never be off,” he said.

Sherwood made 18 of 45 shots from the field, with two three-pointers, and 9 of 17 free throw attempts. The Bowmen had just eight turnovers.

“We adjusted,” Davis said of the key to victory. “We got a little smacked in the face a little at the beginning. They attacked us. But then we played such good defense in the second half. That defense won us the game. We just adjusted. We’re a three-point-shooting team, and they took that away. So, we went to the paint, and made some free throws.”

“They’re a very good defensive team,” Summers said. “And, with them taking away what we do best, shooting, we did a good job getting paint-touches and playing good defense.”

Byles led all scorers with 18 points. Lanier had a double-double with 10 points and 10 rebounds. Murphy added nine points for the Tigers. Brooks scored six, and Muthiah had a strong overall game with three points, 11 rebounds and four assists.

Newberg made 18 of 49 shots from the field, with four three-pointers, and 6 of 9 free throw attempts.

“They wanted it,” Davis said of the Tigers. “This is their main game. We’ve got a good rivalry going. This was a big game for both teams. It was absolutely a blast.”