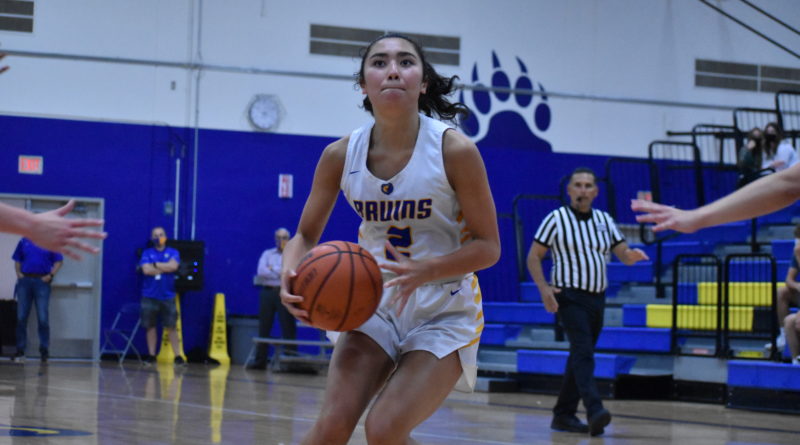 GRESHAM — The Barlow girls basketball team avenged an early-season loss to Central Catholic with a resounding 67-43 victory Tuesday night that pushed the Bruins alone into second place in the Mt. Hood Conference.

“It was a big game, and we were ready and excited,” Barlow coach Nick Hudson said. “Right after that first game, we were looking forward to getting another shot at them.”

The Bruins carried a 36-28 lead to halftime and put the game away by scoring the first 11 points coming out of the locker room.

Melanie Hiu got things started with a steal and breakaway layup. Moments later, center Rilyn Quirke wrestled a rebound from two crimson shirts and started action the other way. Lindsay Barden dribbled to the free throw line, where she attracted a crowd before dishing the ball to a cutting Hiu for another easy basket.

“Our energy was up, and good teamwork led to a lot of good things offensively,” Hiu said.

Quirke got in the action again on the defensive end, blocking a shot in the lane that ended in a Rams turnover because of an over-and-back violation. Moments later, Quirke sank a three-pointer from the top of the arc to put Barlow in charge, 46-28.

“We really wanted this one — we wanted to prove ourselves,” Quirke said. “That start gave us the confidence to slow things down and run through our plays.”

Central Catholic went scoreless through the first five minutes of the second half.

The Rams ended the dry spell when freshman Jayda Jackson drove the right side for a layup.

But the damage had been done, and the Bruins would only expand the margin in the fourth quarter.

The win boosts Barlow to 6-2 in conference play with a big game ahead at 6:30 p.m. Friday, when the Bruins travel to league-leading Clackamas (9-1).

The teams traded the lead five times in the first quarter with Gretta Baker scoring the Rams’ first seven points. Central Catholic took its final advantage at 12-11 when Baker took two quick dribbles to her right, used a screen to gain space and swished a three-pointer.

Barlow answered with two offensive rebounds on its end of the court, eventually ending with Annie Koenig driving the baseline for a layup.

Bruins freshman Kylie Ihrig provided a boost off the bench when she scored on a layup and drilled a three-pointer from the top of the arc to stretch Barlow’s lead to 28-21 early in the second quarter.

Barlow made it a double-digit margin shortly before halftime when Hiu drove unchallenged down the center of the lane for a layup.

“We were able to get stops on their main players,” Hiu said. “We knew their offense, pressed up and took advantage of their weaknesses.”

Barden finished with a game-high 18 points — most of them coming on short jumpers in the lane.

“Their posts kept coming up, so the mid-range game was open, and we were fast enough to get to those spots,” Barden said. “Every time we would get a basket, it would give us the energy to make a stop.”