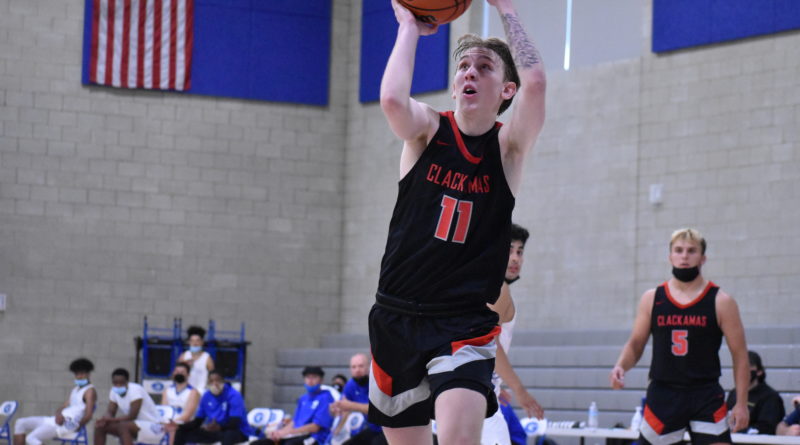 GRESHAM — The Clackamas boys basketball team remained perfect on the season after making quick work of Gresham in a 64-43 win Saturday afternoon to complete a sweep of the season series between the Mt. Hood Conference foes.

The Cavaliers built a double-digit margin in the first quarter after holding Gresham to one made basket through seven minutes.

“We know we have a target on our back,” Clackamas senior Izzy Baker said. “We brought it all week in practice and came out with a big effort to attack these guys today.”

The Cavaliers continued to stretch their lead early in the second quarter when Baker got the ball in the post and kicked out a diagonal pass to Damon Erickson for a wide-open three-pointer. Moments later, Levi Simmonds came up with a steal at midcourt and fed the ball ahead to Erickson for a layup.

Late in the first half, the ball zipped around the court with all five Cavaliers getting a touch before Rylan Peterson buried a corner three-pointer in front of the Gophers’ bench.

Clackamas took a 32-20 lead to halftime and put the game out of reach with an 11-point spurt to start the third quarter.

Jackson Jaha and Erickson sank back-to-back three-pointers — Erickson’s coming in transition with plenty of time to set his feet and zero in on the rim.

“We were on the fast break, and nobody was in front of me. When you are that wide open, you can’t pass it up,” Erickson said.

“We knew if we came out and threw the first punch that they would go away easier.”

On the team’s next trip, K.J. Horsley drove the left side, absorbed some contact at the hoop and finished the layup. Baker blocked a shot on the defensive end, and teammate Ryan Lewis raced down the floor and converted a three-point play.

The Cavaliers were in charge 43-20 barely two minutes into the second half.

“I’m super happy with our effort and impressed with our focus and energy right from the beginning,” Clackamas coach Cameron Mitchell said.

The Cavaliers improved to 8-0, a record kept perfect after coming back from 12 down to beat Central Catholic 58-55 last week.

“The guys stayed together and got some defensive stops, and when you do that, you always have a chance,” Mitchell said.

Clackamas has a big nonleague test at 7 p.m. Tuesday when it travels to PIL-contender Grant (7-1).

“That’s going to be a great game,” Mitchell said. “It will give us a good test on the road — it will be a high-intensity game.”