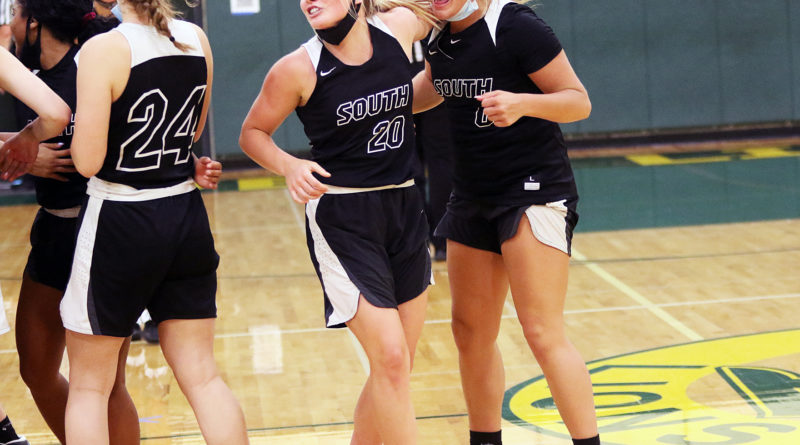 Thanks to a blazing start and an impressive finish, the Panthers made that statement — and they spoke loud and clear.

South Medford, rallying from a 15-point second-half deficit, stayed perfect on the season by posting an 81-69 win over West Linn in a nonleague battle of what looks to be two of the state’s very best teams, played Friday at West Linn High School.

“We came to make a statement,” said South Medford senior guard Kaili Chamberlin, who had 20 points. “People have been doubting us, and we wanted to prove them wrong, and let everyone know that we’re here to play, and we’re a team that comes together and just grinds.”

“I feel like this proves a lot,” said South Medford sophomore guard Donovyn Hunter, who scored a team-high 22 points. “Last year got cut short, and we didn’t get to play the teams we were supposed to play, so this shows something.”

With the win over the Lions, its fourth victory in the past four days, South Medford, which won 52-43 at Beaverton on Wednesday and triumphed 73-34 at Grant on Thursday, improved to 6-0. It also might very well move the Panthers to the top of the discussion on who might be the best team in the state.

“We think we’re No. 1,” Chamberlin said with a smile. “We want to prove to everyone that we’re here to play, and we’re here to get better and grow as a team. We want to give it our all every time, because you never know when the last time is, especially after last year, and the COVID thing. Last year, we didn’t get to finish state, so we just came to show everyone what we are.”

“It’s huge,” Hunter said of the victory. “We had three games before this. We wanted to play the toughest teams and pull through, so this is a huge win for us.”

West Linn moved to 5-2 with the loss.

“I think, honestly, it was the best we’ve played this season,” said West Linn senior post Aaronette Vonleh, who scored a game-high 37 points. “So, even though we lost, I’m proud of us. This will make us better.”

“We’ve been wanting this game all season,” said West Linn senior guard Payton Shelstad, who scored 10 points. “In fact, we’ve been wanting this game ever since we played them at the Chiles Center two years ago. So, we had a lot of adrenaline, and we all knew it was a really big game. It felt like we were playing at the Chiles Center, because they are that good, and we respect them as a team so much.”

“We just came in ready to go,” Chamberlin said. “We came in with the mentality that we came here to win. We knew that we had to grind every second, because you never know when it’s your last time.”

“We told each other, ‘Take it play-by-play,’” Hunter said. “We wanted to come out together and play with heart, and just keep going no matter what.”

But the Lions, behind the dominant play of Vonleh, who scored 14 points in a span of 5:03, and with Shelstad and senior Cami Fulcher each sinking a three-point basket, came battling back strong. West Linn took its first lead, at 20-18, when Vonleh scored on a drive to the hoop with 1:01 left in the opening quarter.

South Medford answered with a three-pointer by Coleman, coming off a pass from Chamberlin, to take a 21-20 lead to the second quarter. But there still was no stopping Vonleh.

The University of Arizona-bound Vonleh scored 15 points while adding two rebounds, a blocked shot and a steal in the second period. Shelstad and junior Olivia McVicker each added five points in the quarter, helping West Linn open a 47-34 halftime lead.

“I think we played the first half really strong,” Shelstad said. “We got down early, but did a really good job not getting overwhelmed, and taking care of it. We had a very strong second quarter.”

Vonleh finished the first half with 29 points, coming on 10-of-13 shooting from the field.

“I had been starting off slow this past week, because we’ve had a lot of games, so this game I just tried to focus on being more aggressive,” Vonleh said of her first-half flurry of points.

West Linn kept rolling in the opening minutes of the second half. McVicker opened the scoring in the third quarter, converting a layup off an assist from Shelstad. After a jumper by Coleman, Shelstad scored on a layup, giving the Lions their biggest lead, at 51-36, with 6:16 left in the period.

Now, it was South Medford’s turn to battle back, and the Panthers did so behind their swarming defense.

South Medford, with Chamberlin coming up with three steals, helped force West Linn into 10 turnovers in the third quarter. The Panthers cut the lead to 57-51, following two free throws by sophomore Kendall Fealey and a three-pointer by Hunter, with 1:49 left in the period. A last-second banker by Hunter got South Medford even closer, at 58-53, entering the fourth quarter.

West Linn tried to fight off the South Medford momentum early in the final period. The Lions pushed their lead to 63-55 when junior Isabella McVicker sank a three-pointer with 7:05 to play.

But South Medford had come too far, both figuratively and literally, to be denied. The Panthers answered with an 11-0 run, which included five points (including a three-pointer) by Hunter, a layup and two free throws by Chamberlin, and a basket on a short-range jumper by Logue, off a pass from Hunter, to take a 66-63 lead with 5:29 remaining.

“Heart. It was all heart,” Hunter said of the South Medford rally. “That’s all you can do when it comes down to that.”

“Our mentality just went up,” Chamberlin said. “We knew we wanted to win, we needed to win.”

The Panthers didn’t let up after taking the lead. In fact, they seemed to turn up their energy even more.

Baskets by Chamberlin and Logue, five free throws from Coleman, and a steal and layup, as well as two free throws, by senior Bella Stone helped South Medford pull away in the final minutes for the 81-69 victory.

“I think it was really good,” Chamberlin said. “We started off super quick, and then we went down a little bit. But we went into halftime, talked about the mistakes we needed to fix, and we came out and played harder, and we took over.”

Hunter certainly seemed to help with that. She had nine points, three rebounds and two assists in the fourth quarter.

“I wasn’t going to lose this game, whatever it took. I wanted to step up,” Hunter said.

Hunter had four rebounds and three assists to go with her team-high 22 points. Chamberlin had a strong overall game, with 20 points, five rebounds, five steals and two assists before fouling out with 2:35 left.

“This was so fun,” Chamberlin said. “It felt good to play some really good competition like this, and to play together as a team. It was super fun.”

Coleman added 14 points, including nine in the second half, and four rebounds. Logue scored 10 points for the Panthers. Stone scored six, senior Emma Schmerbach had five, and sophomore Tatum Schmerbach and Fealey each scored two.

South Medford made 29 of 62 shots from the field, with three three-pointers, and 20 of 26 free throw attempts.

The Panthers also stepped up on defense in the second half, limiting Vonleh to eight points after the break.

“In the second half, we talked more about doubling, and coming in front when the pass comes over,” Chamberlin said. “She’s a big person, and she’s really good, and she can take over the game super quick, so you have to be there and be ready as soon as possible.”

Vonleh scored her 37 points on a 13-for-19 shooting night from the field. She had nine rebounds.

“It was really fun, especially since I know some of their girls,” Vonleh said. “It was just fun to play really good competition.”

“She’s a really dominant player,” Shelstad said of Vonleh. “They did a really good job double-teaming her in the second half. Kudos to them for guarding her really well, but she is really hard to cover.”

Shelstad had three rebounds and two steals to go with her 10 points.

“I just came out super ready to go, and I think that reflected in how I did in the first half,” Shelstad said. “I think the adrenaline, knowing they’re a really good team, really got us going.”

West Linn made 20 of 49 shots from the field, with three three-pointers, and 9 of 11 free throw attempts.

“We’re going to learn a lot from this game. This will make us better,” Shelstad said. “This was really fun. We really haven’t been in a tight game like this so far, so it was really fun to pick up the energy.”