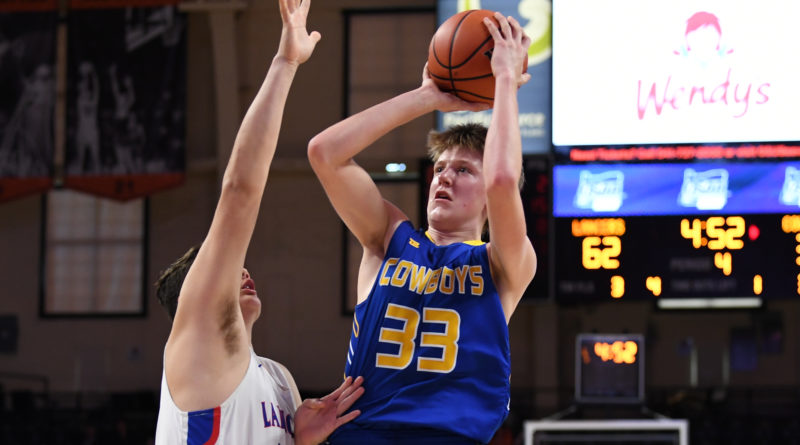 SBLive Oregon is breaking down more than 100 Oregon high school basketball teams. Here’s our look at the Crook County Cowboys boys of the Class 5A Intermountain Conference.

Sanchez has made a name for himself on the basketball court since winning the Central Oregon regional Elks Hoop Shoot competition as a fourth-grader. He earned Intermountain player of the year honors and made the Class 5A all-state second team last season, when he averaged 17.1 points, 5.3 rebounds, 2.5 assists and 2.5 steals per game in leading the Cowboys to their first conference title. He opened his senior season picking up right where he left off, scoring 37 points in an 84-67 win over Mountain View on May 19. “His ability to score and make shots will be a big part of what we do this year,” Mumm said.

The second-team all-IMC selection provides the Cowboys with an inside presence they otherwise lack. He averaged 9.6 points, 6.8 rebounds and just over a block per game as a junior. “His ability to play inside and outside makes him hard to match up against,” Mumm said. “We are looking for him to be a bigger scorer for us this season.”

Sanchez returns as a three-year starting point guard after playing an understated role last season, when he averaged 6.5 points, 3.5 assists and 1.7 steals per game. “What he does for us does not always show up in the stat sheet, but we go as he goes,” Mumm said. “He brings experience and knowledge back for us.”

Smith was one of the first players off the bench last season, averaging 3.5 points and 2.4 assists per game while shooting 38.5 percent from three-point range. He’ll move into a starting role this spring “and will be a leader on the floor for us,” Mumm said. “He will be the guy we ask to anchor our defense and guard the best player on the other team.”

Reed swung between the JV and varsity last season, playing in seven varsity games as a sophomore and averaging 1.3 points. He will step into Smith’s role as a top sub this spring. “He will give us defense, rebounding and shot-making ability off the bench,” Mumm said.

Not since 1948 had a boys basketball state tournament included Crook County, and it had been a dozen years since the Cowboys even qualified for the playoffs before they emphatically ended both droughts last season. They won their final four games of the regular season to earn a share of the IMC title — the first in school history — and then advanced to Gill Coliseum by beating Milwaukie at home.

They capped their season with a consolation semifinal win over West Albany that secured a spot in the trophy round — the first time they were set to take home hardware from a state tournament — before COVID-19 brought an abrupt end to their season.

They graduated Arnold, the team’s second-leading scorer and top rebounder who’s now playing at Blue Mountain, and forward Jordan Graydon, leaving them with only Lowenbach as a true inside presence this spring.

But the Cowboys are not in rebuilding mode — not by any measure. While there likely won’t be a return trip to the state tournament this season, Mumm (who was named Class 5A coach of the year last season) believes another IMC title could be in the cards with the Sanchez brothers and Lowenbach returning to the starting lineup among six seniors back for one final run.

Behind them, four sophomores join Reed to form the backbone of what Mumm hopes will be a future championship squad.

“A realistic goal for this season is to compete for a league title. For this to happen, we would need to stay healthy and continue to get better each day in practice and games. If the state allows us to have a state tournament, I think we have the players that are dedicated enough and have put the work in to get back there.” — Jason Mumm