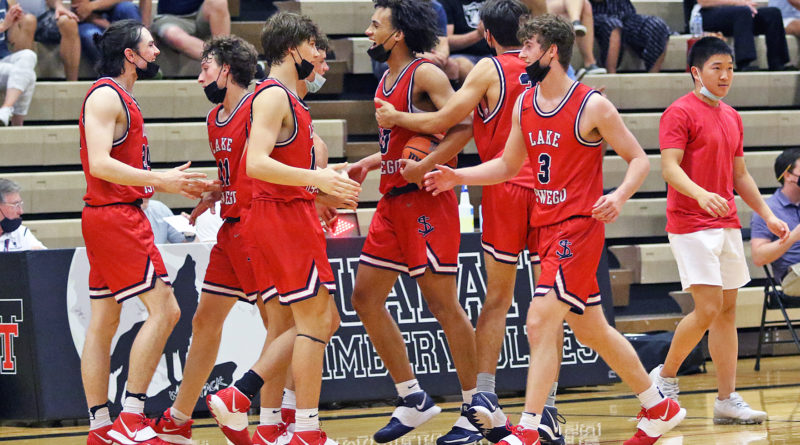 The Lakers wanted to finish the contest strong, and they also really, really wanted to win.

Because they met that first goal, they also got the second.

Lake Oswego, stepping up strong in the fourth quarter and outscoring Tualatin 8-3 in the decisive final 1 minute and 29 seconds, including the final six points of the contest, came away with a 59-52 win over the Timberwolves in the Three Rivers League game at Tualatin High School.

“That was 100-percent important,” Lake Oswego senior Trace Salton said of the Lakers’ strong finish. “We’ve been struggling with closing out games, so that’s been a big thing for us, and I think that’s why we won today.”

“The last couple of minutes were huge,” said Lake Oswego junior guard Carson Reno, who scored 15 points. “We felt the momentum leaning our way, and we just kind of went with that momentum. We really settled down on defense and got some key steals.”

With the win, which ended a four-game losing streak against strong opponents, the Lakers improved to 2-5 overall and 2-3 in Three Rivers play, putting Lake Oswego in fourth place in the league standings.

“This is pretty big,” said Salton, who scored a game-high 21 points. “You know, coming into this night, we were 1-5, so we’ve been practicing a lot on the stuff we needed to work on, defensive stuff as a team, being connected, and we came out on the court and showed what we can do. We definitely needed this one.”

“It’s a huge win,” Reno said. “We were 1-5 before this. We’ve put together some really good first halves but struggled to finish the game, so to finish this one was huge.”

Tualatin moved to 5-2 overall and 4-2 in Three Rivers games, putting the Timberwolves in third place in the league standings.

While Lake Oswego finished strong, Tualatin, which entered on a five-game win streak, got off to a solid start. The Timberwolves, with junior guard Malik Ross scoring off a pass from senior Carson Denning following a steal, took a 10-7 lead with 3:59 remaining in the first quarter.

Tualatin, which never trailed in the opening quarter, got eight points from the ultra-quick Ross in the period and led 14-12 entering the second quarter.

The Timberwolves kept on rolling from there. Tualatin opened the second period with a three-point play by senior Logan Shaw, followed by a basket on a baseline drive by senior Blake Howarth, giving Tualatin a 19-12 advantage with 6:56 before halftime. The Timberwolves took their biggest lead of the game, at 21-13, when junior Kellen Hale sank a short-range bank shot with 5:38 remaining in the second quarter.

That’s when Lake Oswego — and Reno — started battling back.

Reno scored eight consecutive points, sinking two three-point baskets in the process, to help the Lakers tie the score, 21-21, with 3:39 left in the first half.

“I’ve been getting in the gym, and in the shoot-arounds before the games, and I’ve really seen it go in a couple of times, and that felt pretty good,” Reno said. “I’ve been playing with confidence — confidence is huge.”

Tualatin responded, getting five consecutive points from senior Jackson Passaglia and going up 26-21 with 2:33 left in the period. But Lake Oswego rallied again, and, with Salton scoring on a late put-back shot, the Lakers had a 27-26 lead at halftime.

Salton opened the second-half scoring by sinking a three-pointer from the left corner, coming off a pass from Reno, upping the Lakers’ lead to 30-26. But Ross then showed how quickly he can turn a game around. Ross scored six consecutive points in a span of 32 seconds, giving Tualatin a 32-30 advantage with 5:09 left in the third quarter.

The Timberwolves, with junior post Ashton Rose scoring six points in a row later in the period, took a 40-39 lead to the fourth quarter.

That’s when things really got interesting.

Salton converted a three-point play to give the Lakers a 45-44 lead with 5:34 remaining. Tualatin quickly answered with a three-pointer by Denning, giving the home team a 47-45 advantage.

Lake Oswego responded with a basket on a jumper by junior Sorena Torabi and another three-pointer by Reno, giving the Lakers a 49-45 lead with 3:10 to play.

Tualatin cut the margin to 53-52 when junior Noah Ogoli connected on a three-pointer with 1:19 remaining. The Timberwolves had a chance to take the lead after Passaglia came up with a rebound following a Lake Oswego missed free throw. But that’s when the Lakers turned to their defense to wrap up the win.

Lake Oswego helped force Tualatin into a turnover in its ensuing possession. Then, after Salton went 2 for 2 from the free throw line with 37.7 seconds remaining, Salton came up with a backcourt steal. That led to two free throws by senior Ryan Hooper, giving the Lakers a 57-52 advantage with 17 seconds to go.

Lake Oswego senior Grayden Smith then came up with a steal and passed ahead to Reno, whose last-second layup wrapped up the 59-52 victory.

“This was really fun,” Salton said. “It’s been a while since we got a win, so it was good to celebrate with the guys in the locker room.”

“It felt amazing. This was a joy,” Reno said.

Salton scored his game-high 21 points on an 8-for-18 shooting night from the field. He had six rebounds and two steals.

“One of the things we’ve been working on is coming out strong in the second half and finishing games, and we did that today,” Salton said. “It’s just confidence, knowing that the pass is going to be on target from your teammate, and you’re going to knock it down. And, if it doesn’t go in, you’ve got people in there to rebound for you.”

Reno scored all 15 of his points in the second and fourth quarters. Smith added 12 points for the Lakers. Torabi scored six, Hooper had three and junior Luke Brauner scored two.

Lake Oswego made 21 of 49 shots from the field, with five three-pointers, and 12 of 17 free throw attempts.

“We all trust in each other to take that shot, and when we see Grayden or Trace or anyone let it fly, we have confidence that it’s going to go in.”

Ross led Tualatin with 18 points. He had three rebounds and two steals. Hale added eight points for the Timberwolves. Rose had six points. Passaglia had five points to go with nine rebounds. Ogoli had five points and three assists.

Tualatin made 20 of 49 shots from the field, with three three-pointers, and 9 of 11 free throw attempts.

Lake Oswego doesn’t have much time to celebrate the win at Tualatin, as the Lakers return to action Thursday — their third game in three days — when they play host to West Linn in a Three Rivers League contest starting at 7 p.m.

The Timberwolves will next play Monday, when they travel to Canby for a Three Rivers League game starting at 7:15 p.m.