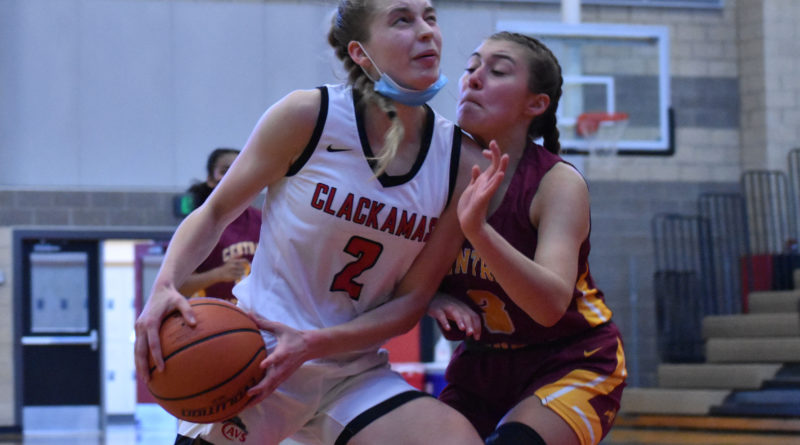 CLACKAMAS — The Clackamas girls basketball team showed itself to be the team to beat in the Mt. Hood Conference by dispatching top contender Central Catholic 56-32 on Wednesday night.

The Cavaliers started fast with point guard Rhyan Mogel scoring the team’s first 11 points. Next, she snagged a long rebound and whipped a long bounce pass down the court that hit teammate Bella Garcia in stride for a layup. Moments later, Liv Shackelton made a steal in the backcourt and found Garcia, who was fouled on her way to the basket. She sank both free throws to put the Cavaliers up 19-5.

“We let our defense fuel our offense, and that really got us going and playing fast,” said Mogel, who finished with a game-high 17 points. “Central Catholic is a good team, so it felt good to come together and get this done tonight.”

The first quarter ended with senior Sydney Benedict grabbing a rebound and tight-roping the sideline before being bumped off balance in front of the Cavaliers’ bench. She got off a pass to Shackelton with five seconds left and moved to the center circle, where she got the ball back with just enough time to fire a high-arcing shot that ripped through the net at the horn.

Clackamas was in command with a 24-7 lead.

“I had faith that Liv would get the ball back to me,” Benedict said. “That’s the kind of stuff you do when you are messing around in practice — it felt good to make it happen during a game.”

The Cavaliers would enjoy a double-digit margin the rest of the night, although Central Catholic made a run before halftime. Carly Hicks and Yasmin Woodard connected on a series of three-pointers, and Hicks and Sophia Bowman beat the buzzer with a give-and-go that pulled the Rams within 31-20 at the break.

“We hit a bit of a lull in the second quarter, but we went in at halftime and the girls decided that they really wanted to win this game,” Clackamas coach Korey Landolt said.

Coming out of the locker room, Clackamas forced back-to-back turnovers that led to breakaway layups by Mogel and Eliza Buerk. Central Catholic spent a timeout less than a minute into the second half.

But the Cavaliers could not be stopped.

Mogel found Benedict cutting down the lane for another layup, then spotted her outside the arc for a three-pointer on the team’s next possession. Benedict spotted up for two more deep balls, raising her arms over her head to celebrate while bouncing back to the defensive end. She put up 11 points in little more than a minute as Clackamas saw its lead mushroom to 46-22.

“It’s always fun to beat a rival, and that was the boost of energy that we needed,” Benedict said.

The Rams were held to five points in the third quarter.

“We put some pressure on their shooters. We closed out hard and got a hand in their faces. They weren’t able to get into the same rhythm that I’ve seen them hit in other games,” Landolt said.

Clackamas (7-0) is unbeaten entering the second cycle of the league schedule. The Cavaliers will travel to Beaverton (6-1) for a marquee nonleague game at 7 p.m. Thursday — a Chiles Center-worthy matchup during a normal season.

Central Catholic (5-2) also has a big nonleague game ahead, playing host to Class 5A power Wilsonville (6-1) at noon Saturday.