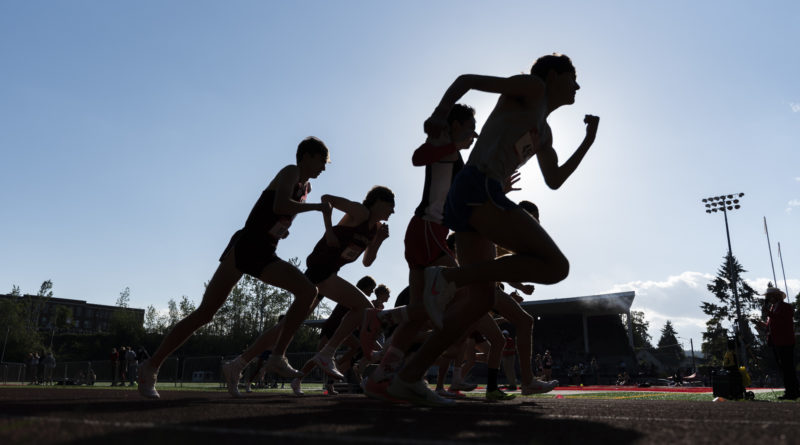 Junction City senior Anika Thompson had gotten quite used to running by herself during her final high school season.

That’s the result of running times never before seen at the Class 4A level.

The University of Oregon signee broke the 4A record in the 3,000 meters last week at the 4A Track and Field Showcase meet at Siuslaw High School in Florence, winning the title in 9 minutes, 46.89 seconds, to move into 15th place on the all-time state list for all classifications.

“It was a challenge for sure, but I feel comfortable and confident being out by myself, not worrying about anyone else and just focusing on my pace,” Thompson said. “I am very conscious, especially being out there by myself. I primarily focus on running even splits and executing my plan to achieve my goals.”

Thompson doesn’t plan on running in any meets this summer, instead training for her freshman cross country season in a Ducks singlet, so cracking the top 15 all-time and running the nation’s third-fastest 3K this season will have to suffice for season goals.

“I am beyond happy and grateful to be on the list,” she said. “It means so much to me. It’s an honor.”

Thompson’s record-setting run was one of 65 performances during the six-week season to rank among the top 50 marks in state history, including several by underclassmen who show the potential to set state records by the time their careers are over.

The Lakers ninth-grader wrapped up her first high school season with titles in the 100 and 200 at the 6A Track and Field Showcase. She also posted the second-fastest 100 in state history and the third-fastest 200, with her 11.67 personal-best in the 100 the third-fastest by a freshman nationally and her 23.70 ranking No. 2 among the nation’s freshmen.

This budding middle-distance rivalry resulted in the state’s third- and fourth-fastest 800 times in history at the 6A Showcase, with Foerster’s 2:05.66 also No. 5 in the nation this season and Williams’ 2:08.03 the nation’s eighth-fastest half-mile. Foerster also moved to No. 8 on the all-time list in the 1,500 with her victory at a May 13 Metro League dual meet in 4:26.06 and No. 5 among milers with her 4:50.55 at a Trials of Miles qualifying meet May 1 in Kansas City.

Daniel swept the hurdles titles at last weekend’s 6A Showcase, but her times at the Three Rivers district meet the previous week — a wind-legal 14.23 in the 100 highs and a 43.32 in the 300 prelims — both sit No. 5 on the all-time lists.

These two 4A high jumpers had an anticlimactic finish — Gates won the 4A Showcase by clearing 5 feet, 6 inches, with Norman third at 5-0 — to an amazing season during which both moved into the top 10 all-time. Gates went 5-11 in late April, becoming the fifth girl in state history over that height. Norman’s 5-10 clearance at the Tri-Valley district meet moved her to No. 8 all-time.

Besides anchoring a 4×400 relay team that posted the 11th-fastest time in state history to win the 6A Showcase, she also matched the school record set by Karen Alcorn in 1988 with a long jump of 19-8½ at the Showcase, moving to No. 2 on the all-time list. She has a good chance of becoming the fourth girl in state history to jump 20 feet — and the first to do so legally. Alcorn in 1986, Michelle Reynolds of Churchill in 1988 and Patty Baker of Gresham in 1982 all did so, albeit wind-aided.

Sukumar’s winning triple jump of 38-5¾ at the 6A Showcase moved her into the top 25 on the all-time list. She has two years to set her sights on Sara Callier’s state record of 40-7¼ set in 2005 at Benson as she shoots to become the fourth 40-foot triple jumper in state history.

Gorze broke the boys state sophomore record in the 1,500 at the 5A Invitational at Wilsonville, his winning time of 3:50.88 besting the previous record by nearly 2½ seconds and moving him to No. 13 on the all-time list.

McMaster won titles at the 4A Showcase in the shot put and discus, but it was his discus throw at a May 14 Cowapa dual meet that put him in the record books — a 192-10 toss that ranks No. 12 all-time, broke the 4A junior record and is No. 2 among all 4A throwers, two feet off Jefferson Jarvis’ 194-9 record set in 2012 with Hidden Valley.

Two seniors who could return to the University of Oregon’s Hayward Field next year while competing for Pac-12 rivals also finished their seasons with top-five all-time marks.

Franklin senior Charlie Robertson, headed to Colorado, ran the fifth-fastest 3,000 in state history (8:14.71) in adding the 6A Showcase title to the state championship he won as a sophomore in 2019.

At Siuslaw, Hidden Valley senior and Stanford signee Kaiah Fisher finished her career with 4A Showcase titles in the shot and discus. She improved upon her already-No. 2 all-time mark in the discus with her winning throw of 166-10, and her 45-9 winning shot put moved her into No. 16 on the all-time list.

Check out the complete all-time top 50 lists, updated through May 23.