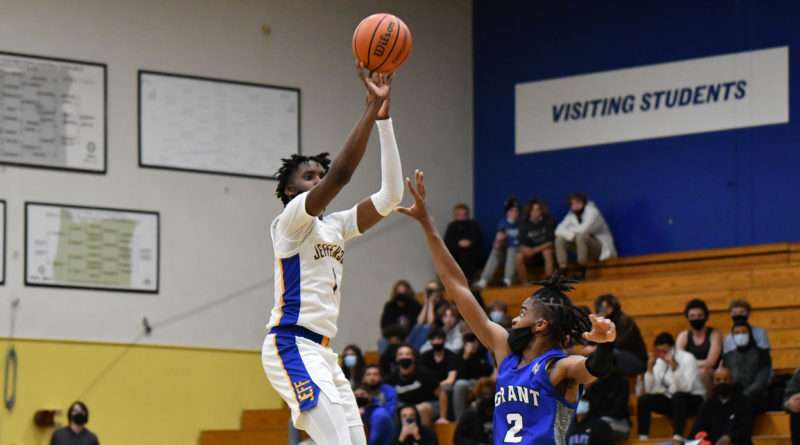 If this indeed was Mookie Cook’s final time playing on Jefferson’s home court in its NoPo rivalry with Grant, he walked off the court with a flourish.

Cook’s three-pointer hit off the front iron, bounced high in the air and dropped through the basket as the clock hit triple zeroes Thursday night, giving the Democrats a 57-54 victory in a back-and-forth battle worthy of these two adversaries.

The sophomore all-state guard had a rough night for the first 31 minutes, 59 seconds, hitting on just two of his previous nine shots before making the game-winner to finish with seven points and a game-high 10 rebounds.

“You’ve just gotta keep having that confidence in yourself,” Cook said. “I had a bad game, but you know, throughout the whole game, I just try to tell myself, keep shooting and try to do more than just score for your team. Get assists, play defense, keep on going, and I made the clutch shot.”

The Generals led 54-49 with 1:43 to play after their sophomore sensation, Adrian Mosley, drove the lane for the last of his 15 points.

Down the stretch, though, everything went right for the Democrats (5-0). On their next possession, they scrapped for three offensive rebounds, with Cook finally scoring on a reverse tip jam with 1:15 remaining.

After Grant missed a front end of a one-and-one, Jefferson’s other returning all-state guard, junior Lamar Washington, tied the score with a deep three-pointer from the left wing with 42 seconds left.

The Generals (4-1) tried to milk the clock for the final shot but turned the ball over with 16.5 seconds remaining, setting up Cook for his final heroics, coming off a high ball screen in a scramble situation and firing the game-winner.

“Exactly like we drew it up — pick-and-roll, and whoever had it in their hands last gotta hoist it up there,” said Democrats coach Pat Strickland, whose team won its fifth in a row in the rivalry.

“They (Cook and Washington) are that caliber of player where they may struggle the whole game, but they have that ‘it,’ whatever that ‘it’ is, to make a shot at the end of the game like that. So, I have no worries putting the ball in either one of their hands at the end of a game.”

Grant junior Max von Arx, who shared team-high scoring honors with Mosley with 15 points, rued the missed opportunities the Generals had to seal the win.

“We just need to capitalize,” said von Arx, who had eight rebounds and four blocked shots. “We have a lot of little things that we’ve gotta fix. Clearly, we need to capitalize on making our free throws and making smart decisions at the end, but overall, it just came down to who was going to get that last shot. Turns out it was them.”

Mosley, for one, can’t wait for Round 2 of the series in the regular-season finale in three weeks at Grant’s gym.

“I mean, we get another shot at them, and all you can do is get better through practice,” he said. “The rematch, hopefully we come out with the win next time.”

Cook and Washington plan on leaving over the summer to transfer to AZ Compass Prep, a national elite prep program in Chandler, Ariz., that won the Grind Session World Championship in March and reached the GEICO Nationals semifinals last month.

Their primary goal is to gain attention as college recruits playing against other top-level players, but Cook acknowledged he’d miss playing in the Grant-Jefferson rivalry, even in a COVID-affected season that saw the Democrats gym only about one-quarter filled instead of teeming to the rafters with fans.

“Definitely, man. I love this,” Cook said. “You know, this is my town, so I mean, this is dope, seeing everybody out, everybody coming out to support us.”

Mosley said he also has considered going the prep school route and will play on the same AAU team (Dream Visions) as Washington this summer looking to draw offers.

“I know they’ve got a lot of connections,” Mosley said. “Of course, (I would) miss the hometown. I know everybody in the stands, so that makes it more interesting and fun.”

While it appears Cook and Washington’s departures are done deals, Strickland hasn’t given up hope of keeping them in Democrats blue and gold. He pointed out that other former Jefferson stars such as Terrence Jones, Terrence Ross and Silas Melson all heard the siren song of the prep schools, with Jones and Melson resisting the urge. Ross departed for his junior year to Montrose Christian in Maryland, only to return to Jefferson midway through his senior year.

“They stayed because what they’re wanting to do, they can do from here,” Strickland said. “The proof is in the pudding. I’m hoping those guys can understand that as we move forward. It is my job to keep them here, and I think I have a chance. But if they do go on to greener pastures, they’ve been great kids, great ambassadors for Jefferson.”

Should Cook and Washington leave, the cupboard would hardly be bare for Strickland next winter. Trejon’ Williams, a University of Oregon football commit at safety, is no slouch on the hardwood, scoring a game-high 20 points Thursday on 8-of-10 shooting and grabbing seven rebounds. Sophomore guard Sanborne Melson didn’t score Thursday but would step into a starting role, and several injured underclassmen will be ready to return in November.

“The future’s still bright,” Strickland said. “We’ve still got something in the tank over here.”

Both teams entered Thursday’s rivalry game undefeated, with the Generals sweeping through four PIL opponents and the Democrats posting road wins at Jesuit and Lake Oswego.

As expected in a rivalry game, neither could seize momentum for long. The game featured four ties and 10 lead changes. The Generals built a 27-18 lead late in the first half, only to have the Democrats finish on a 9-1 run over the final 90 seconds to close to within 28-27 at intermission.

The Generals held a small but steady lead through most of the second half, keeping Jefferson’s high-powered attack stuck in second gear with a 2-1-2 zone that held the Democrats to 36 percent shooting (22 of 61).