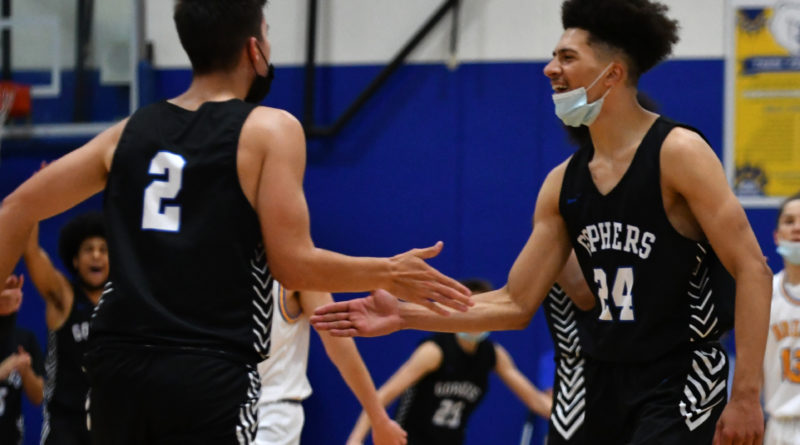 GRESHAM — The Gresham boys basketball team shifted into gear midway through the game and never looked back in a 61-47 road win at rival Barlow on Friday night.

Coming out for the second half holding a five-point lead, Gresham’s Esyah Pippa-White found himself with a shadow in the form of Barlow senior Owen Arn.

Pippa-White turned himself into a decoy — at least some of the time.

The half started with Pippa-White driving into the lane before kicking the ball to teammate Nate Caro, who buried a three-pointer from the top of the arc. On the next trip, Pippa-White dribbled around a screen and pulled up outside the arc for a deep ball of his own.

The strategy continued with the 6-foot-2 guard dribbling in deep once more before finding Jake Henkle, who swished a three-pointer from several feet behind the arc. The two barked at each other in celebration while walking to the sideline for a timeout leading 42-31.

“My first move was to go around and set screens to get my teammates open, then I would work to get myself open,” Pippa-White said. “We spaced out the defense and opened up the court.”

When play resumed, Pippa-White came up with a steal, was fouled on his way to the basket and sank both free throws.

Barlow was whistled for three fouls on a possession early in the fourth quarter, which ended with Henkle taking and inbound pass and driving the baseline for a layup and a 48-36 lead. The Gophers would maintain the double-digit margin most of the rest of the way.

With the game well in hand, Henkle could be seen waving to Barlow’s student section as if to encourage them to make some noise. As the clock rolled under a minute to play, he clapped his hands together on defense and came up with a steal that resulted in a layup for teammate Elijah Munyan.

“This game is always circled on the calendar. We also knew it was going to be the first game back with fans, so we played into that and came out with a ‘W’,” Henkle said.

Pippa-White finished with a game-high 26 points. He did much of his damage at the free throw line, where he connected on 12 of 14 (85.7 percent) attempts. During one stretch of the fourth quarter, he and Caro combined to make 12 consecutive foul shots.

Barlow led throughout the first quarter thanks in large part to a hot-shooting start by guard Connor Hills, who paced the Bruins with 14 points.

Gresham pulled even early in the second quarter when Caro came up with a steal in the backcourt and converted a layup.

A few minutes later, Pippa-White drove into the lane and kicked the ball to Munyan at the top of the arc. He faked the three and exploded to the basket for a one-handed dunk to give Gresham its first lead of the night at 21-19.

“That was a statement dunk — it got things flowing,” Munyan said.

With the second cycle of the league schedule ahead, Gresham (5-1) is the top challenger to Clackamas (6-0) in the battle for first place in the Mt. Hood Conference.