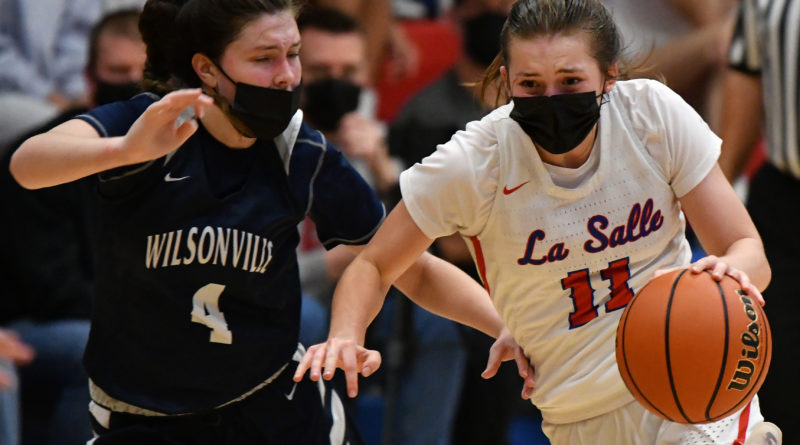 MILWAUKIE — Needing a basket with 10 seconds on the clock, Wilsonville senior guard Sydney Burns knew exactly what to do.

She took an inbound pass from the sideline, turned toward the basket and took two quick dribbles. A crowd of white-shirted La Salle Prep defenders flooded the area. Burns anticipated the crowd and got rid of the ball, finding teammate Grace Gatto across the lane for the final points in the Wildcats’ 61-60 road win Monday night.

“We had a lot of options on that play, so I knew I had people out there who would be ready to score,” Burns said. “Grace found her way to the block and made an amazing finish.”

“At first, I thought Sydney was taking it all the way, so I came down to rebound, then the ball came to me and it was a layup just like in practice drills,” Gatto said.

With six ticks remaining, La Salle Prep dribbled past half court and reached the arc before attempting a three-pointer that glanced off the front of the rim.

“I’m just proud of the kids for hanging in there under pressure and finding a way to get it done in the end,” Wilsonville coach Justin Duke said.

The two teams have battled for the Northwest Oregon title each of the past three seasons, combining for a 78-6 (.929) league record over that span. La Salle Prep and Wilsonville were set to meet in last year’s Class 5A semifinals before the season was canceled because of COVID-19.

“It’s such a good rivalry. It’s just fun,” said Burns, who will play at UC Davis next season. “You never know what’s going to happen, but you know it’s always going to be close.”

Wilsonville opened the biggest lead of the night at 39-29 early in the third quarter after junior Karina Borgen hit two three-pointers followed by an easy two off an assist from Emilia Bishop.

“Building that lead helped us know that we could get some runs going,” Borgen said. “And we knew we could get back to that style of play when things got tight in the fourth.”

Borgen scored 15 of her game-high 24 points in the third quarter, attributing her hot-shooting night to taking a bit of the arc out of her shot.

“We knew they would come out and guard Sydney closely, and my teammates did a good job finding me,” Borgen said.

The teams traded the lead six times down the stretch.

La Salle Prep’s Mia Skoro moved into the lane and hit a hook shot from her waist to put the Falcons up 53-51. A few minutes later, Wilsonville’s Keira McNamee fired a pass cross court to Gatto for a corner three-pointer and a two-point Wildcats lead as the clock moved under three minutes.

Wilsonville looked to pad its lead only to have Skoro step in front of a pass in the lane. The outlet went to sophomore Emma Buchanan, who dribbled toward the basket only to see three Wildcats blocking her path. She spun away and swished a fadeaway from eight feet to tie the score at 56-56 with 2:12 remaining.

The Falcons struck again when another sophomore, Ella Wedin, stepped just inside the free throw line and switched hands in mid-air to sink a 10-foot lefty shot for a two-point lead as the clock went under a minute.

Wilsonville answered with Burns sinking a three-pointer from the top of the arc, only to have La Salle Prep respond with Amanda Sisul driving the lane and lifting a shot over a taller defender to put the Falcons up 60-59 with 19.2 seconds left.

“I’m super proud of how we rallied in the second half,” La Salle Prep coach Kelli Wedin said. “We are young, but these kids love each other and play well together. They are embracing some new roles, but we were able to put Wilsonville back on their heels.”

The rivalry showdown began with a show of sportsmanship, as Wilsonville tossed the ball directly out of bounds to open the game. La Salle Prep’s Ella Wedin took the ball from the referee and fired a half-court pass to the basket, where older sister Addi Wedin made the catch and converted a layup for what will be her only two points of the season.

She is sitting out this season while continuing to recover from a knee injury. Wedin and her mom are taking a morning flight to California, where Addi has signed to play college ball at Saint Mary’s, joining older sister Taycee, a senior with the Gaels.

“It meant a lot to see her suit up one more time,” Kelli Wedin said. “She has been a huge player for us, and she deserved that moment.”

La Salle Prep then returned the favor by allowing Burns a free path to the hoop to start the game 2-2.

“When Kelli called me with the idea, I was on board — absolutely. It was a great way to honor her,” Duke said.