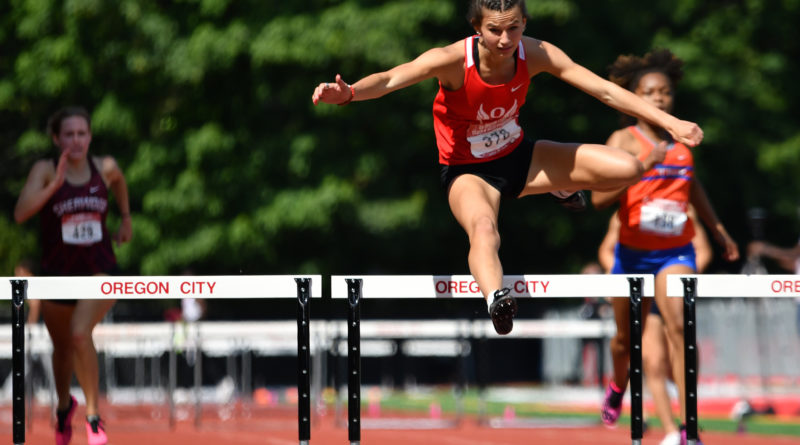 When it comes to Class 6A girls hurdles events, there’s no doubt about it — Harley Daniel rules.

But getting to that point didn’t come easy.

“I put a lot of practice into it and stayed committed,” the Oregon City junior said. “I’ve put in the work.”

And that work paid off with a couple of championships.

After winning the 100-meter high hurdles earlier in the meet, Daniel doubled her title winnings by running to victory in the 300 low hurdles at the Oregon 6A Track and Field Showcase, held Saturday at Pioneer Memorial Stadium in Oregon City.

But in Saturday’s final, Daniel made it look easy, winning the race in a time of 43.36 seconds.

“It was pretty good,” Daniel said of her winning time. “It was close to my PR.”

The win gave Daniel championships in both hurdles events — an accomplishment she said she didn’t expect at the start of the season.

“It’s crazy,” Daniel said with a laugh. “I didn’t think it was possible, but I put in a lot of hard work.”

Does she like one event more than the other?

Benson senior Brianna Turner finished second in the 300 low hurdles in a time of 44.33. Sherwood senior Joley Sproul finished third in 45.45, and Westview sophomore Xian Hartenstein was fourth with a mark of 46.24.