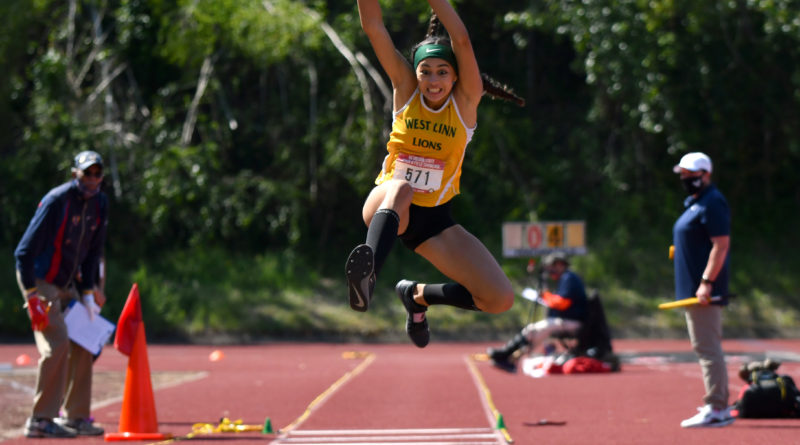 Anika Sukumar had a lot going for her.

The West Linn sophomore took it all and turned it into a big personal-best jump — and a championship.

Sukumar, with all of that on her side, soared to victory in the triple jump event at the Oregon 6A Track and Field Showcase, held Saturday at Pioneer Memorial Stadium in Oregon City.

“It means a lot,” Sukumar said after receiving her championship medal. “It’s my first state meet, I’m only a sophomore, last season got canceled (because of the COVID-19 pandemic), but I’m super happy. I got a PR (personal record) and I’m really happy to be a state champ.”

Even before Saturday’s triple jump competition, Sukumar likely had some momentum on her side from Friday’s long jump event. Sukumar’s last attempt in the long jump was a personal-best distance of 18 feet, 7 inches, which vaulted her to second place in the final standings.

“I was hoping that would carry over to today,” Sukumar said.

On her first attempt in the finals of Saturday’s triple jump event, Sukumar turned in a personal-best distance of 38-5.75.

“It’s awesome. It was a PR by more than five inches, and it was the first time I’ve broken 38 this season, so I was really excited about that,” Sukumar said. “I could feel it was a good jump. I was able to use some of the techniques that my coaches helped me with, so I was really happy that it all came together.”

That wasn’t Sukumar’s only impressive jump of the competition, as she had two other attempts go more than 38 feet.

“I think the energy was just really good today,” she said. “Maybe the weather had something to do with it. I was trying to get myself into a good mindset, telling myself that I was going to do good, and I think that’s what it came down to.”

After winning the 6A triple jump title as a sophomore, Sukumar is already looking ahead.

“I’m going to try really hard to get 40 feet, maybe next season, or over the summer,” she said. “I’m super excited to keep learning the triple jump and see where it takes me.”

Sunset senior Lydia Barnett finished second in the triple jump with a mark of 36-10.25. Oregon City junior Grace Leisure finished third at 36-6.75, and Summit junior Ava Carry-McDonald was fourth at 36-3.