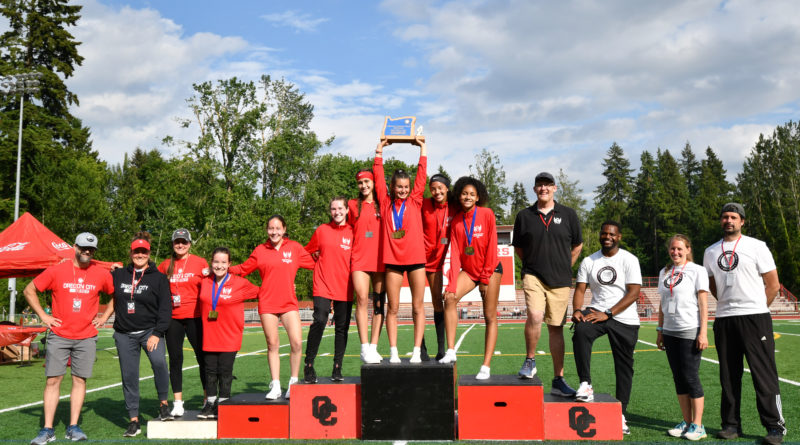 But Oregon City girls coach Kristin Mull remembers it well. After all, she was a member of the 1989 Pioneers squad that shared the Class AAA title with Roseburg.

Now, the current Oregon City team has something to remember — a championship of its own.

The Pioneers reigned supreme in the team standings at the Oregon 6A Track and Field Showcase, held May 21-22 at Pioneer Memorial Stadium in Oregon City.

“Oh my gosh — it means a lot, definitely,” said Oregon City sophomore Sophia Beckmon, who triumphed in the long jump event. “I’m very happy with what we did, and it’s been a while since the girls from OC have won.”

“It means everything. We put so much hard work into this, and to come out on top is pretty amazing,” said Pioneers junior Harley Daniel, who ran to victory in both hurdles events. “We really wanted to win this. We had a lot of motivation.”

“It’s really great,” Oregon City junior Grace Leisure said. “I didn’t even think we were going to have a state showcase in the first place. It was great to come out and showcase our talents, because we put a lot of work in, even in a short season. It was great, finally being able to compete.”

“Oh, it’s huge. I graduated here in 1989, and that’s the last time we won the state championship — 32 years ago,” Mull said. “These girls are great. They work hard, so this is really, really cool.”

“I was very happy,” Daniel said. “This is very special to me. I didn’t know that it would happen, but the fact that it did is pretty exciting.”

“We were hopeful,” Leisure said. “I’m not going to say that we expected to win it. There’s a lot of great competition, but that’s what we were striving to do.”

The Pioneers definitely had to step up against strong competition, especially the talented Lakers.

“We love the sport, and we love each other, and that’s enough motivation,” Daniel said.

Oregon City seemed to carry that motivation throughout the two-day meet.

Beckmon set the tone on the first day of competition, winning the long jump with a school-record mark of 19 feet, 8.5 inches. Beckmon also sprinted to second place in the 200-meter dash in a time of 24.94 seconds, and she was third in the 100 in 12.27.

Leisure placed third in the triple jump at 36-6.75, and she cleared 5-4 to take fourth place in the high jump.

Beckmon, Daniel and Leisure also teamed with freshman Samara Lugo to place second in the 4×400 relay in 3:54.16, putting the Pioneers team just .01 behind victorious Lake Oswego in that race.

Also for the Oregon City girls, junior Dimitra Protopapas took ninth place in the discus with a throw of 105-11. Senior Candice Stilwell won the Paralympic 100, 400, 1,500 and shot put events.

“To win was a goal. We just kept practicing hard,” Beckmon said. “It was really fun. The ending was pretty fun, all the winning was fun, and I’m pretty happy with what I did today.”

“I was really happy. We were checking all day to see where we were. When we got the second place in the 4×400, we knew we had it,” Leisure said. “This was really fun. I love being here with all the schools, tons of friends and all of that.”

“It was super fun. It was such a fun couple of days,” Daniel said.

Summit finished in third place in the team standings with 62 points, and West Linn was fourth with a score of 47.