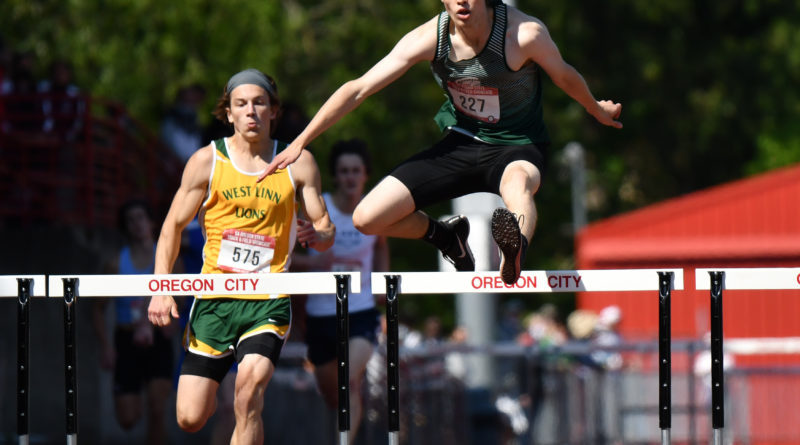 It’s gotten Nolan Malcomson before. In fact, it got him earlier in the day.

But, with a championship in the 300-meter intermediate hurdles in his sights, the Ida B. Wells junior wasn’t going to let the last hurdle — or anything else — get in his way.

Malcomson, who hit the last hurdle during the 110 high hurdles finals, where he placed second behind Barlow’s Micah Perry, soared over the last hurdle, and soared to victory, in the 300 intermediate hurdles at the Oregon 6A Track and Field Showcase on Saturday at Pioneer Memorial Stadium in Oregon City.

“It means a lot, especially coming off that slip in the high hurdles,” Malcomson said after receiving his championship medal. “I nicked the last one, and it put me in the wrong mindset. I’m also so scared of clipping those hurdles, but I didn’t in the 300 hurdles, and I’m so glad I pulled through.”

The determined Malcomson got off to a strong start to the 300 hurdles race, powered his way around the curve and held the lead entering the straightaway.

“Yeah, I could feel Lane 5, he was right on me, and I had to push all the way through to the end,” Malcomson said.

Pushing through to the end meant there was one more big obstacle — that last hurdle. But this time, that last hurdle was no roadblock. Malcomson cleared it and sprinted past the finish line, holding off Maxwell to get the victory.

Malcomson won the race in a personal-best time of 38.49 seconds.

“I finally broke 39. That blows my mind,” an elated Malcomson said. “I had no idea I could do that this year. That’s a big PR. I’m super happy with my time, and super happy with how I did today. It was a great race.”

Maxwell finished second in a time of 38.93. Sunset junior Chase Limbocker was third at 39.92, and Lakeridge junior Tyler Bradley was fourth with a mark of 40.29.