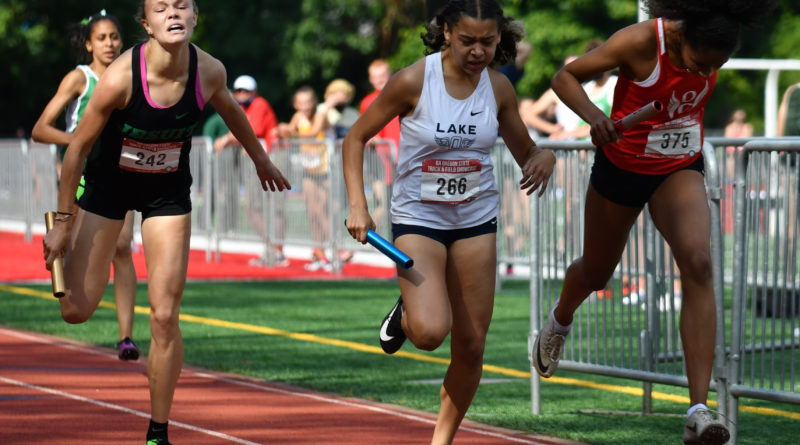 And then just wait, wait and wait some more.

For the Lake Oswego girls 4×400-meter relay team, it certainly was worth the wait.

With everyone staring up at the scoreboard, the results finally showed up — and the Lakers’ celebration began.

The Lake Oswego squad won by the slimmest of margins, edging Oregon City by .01 second, at the Oregon 6A Track and Field Showcase, held Saturday at Pioneer Memorial Stadium in Oregon City.

“It was crazy,” said freshman Riley Ha, who ran the second leg for the Lakers. “I was standing over there, and we couldn’t see very well, and we were all just anticipating the time. I wasn’t looking, and I heard all of them screaming, and I turned around, and it was pretty crazy.”

“Like Riley, I was back there when Josie (Donelson) finished, so I only saw the three teams finishing so close, so I didn’t know what happened,” said junior Julia Sieber, who ran the opening leg. “When I saw the time, that was just amazing. That was crazy.”

“It was really close. I didn’t even know we got first until I saw it on the board,” said Donelson, a freshman who ran the anchor leg and just barely edged Oregon City standout sophomore Sophia Beckmon at the finish line. “Sophia is an amazing runner. It was really a pleasant surprise that we were able to pull it out.”

West Linn was in first place and Franklin in second after two legs. In that third leg, Lake Oswego freshman Mia Brahe-Pedersen, who earlier won the 100 and 200 at the meet, and Oregon City junior Harley Daniel, who triumphed in the 100 and 300 hurdles events, took charge.

Brahe-Pedersen gave the Lakers the lead entering the anchor leg, while Daniel moved the Pioneers from eighth to fourth.

Beckmon, continuing the momentum for Oregon City, would take the lead. But Donelson, with a last-second charge, caught her right at the finish line, with Jesuit junior Chloe Foerster, who earlier won the 800, right beside them.

“I was trying to maintain the kind of pull that Mia had and just finish strong for my team,” Donelson said. “I was thinking that I’ve got to take it home. I can’t let it go now, and I had to leave it all on the track. I finally get to finish, and now is the time to do it.”

“At first, it started off and we were doing pretty well, and then everything else after that is kind of a blur,” Ha said.

“We had a huge PR (personal record), about three seconds. Today, we just gave it our all, and we had a really good day,” Ha said.

“I think this was just super amazing that we were able to come to state after everything this year, and I think our team did really good, pulling through and finishing strong,” Sieber said. “It was just amazing.”

“Honestly, we didn’t expect this at all,” Donelson said. “The other teams are really, really strong, and we were just happy that, at the most really important meet, we were able to just pull it out.”