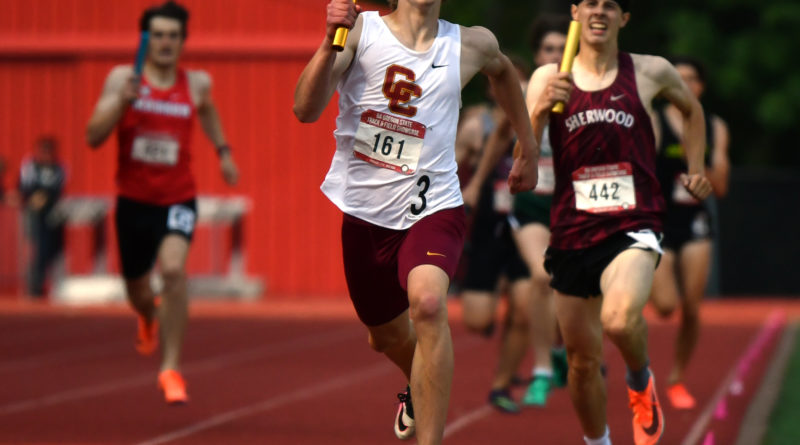 The 4×100-meter relay didn’t go as the Central Catholic team hoped — not even close.

The Rams, who looked to be one of the favorites in the event, were disqualified in that race.

But Central Catholic more than made up for it in the 4×400 relay. The Rams, motivated some by the earlier miscue, ran to victory in that event at the Oregon 6A Track and Field Showcase, held Saturday at Pioneer Memorial Stadium in Oregon City.

“This meant a lot. We came out for the 4×100 and got DQ’d. We messed up on our handoff, and to just come out here and win this, especially for our two seniors, meant a lot to us,” said junior Stryder Todd-Fields, who ran the opening leg for the Rams. “Absolutely, that was motivation. We knew we were the best team out here, just because how we performed. We performed how we were supposed to and came out with a win.”

“It meant a lot. I’m a senior, and this was one of my last races,” said Central Catholic senior Greg Neal, who ran the third leg. “Last year got stripped from us, so badly, and we came into this season injured, and we all had bad times, and we got here after getting really good training, and we won.”

The Central Catholic team of Todd-Fields, junior Julian Kingery, Neal and senior Liam Shores won the 4×400 in a time of 3 minutes, 23.11 seconds.

“I can’t even describe the experience. It was very fun, and I’m just glad I got to do this with my brothers,” said Central Catholic junior Xavier Simpson, an alternate for the relay team who finished second in the 100-meter dash earlier in the meet. “I’m so happy we won. Our teammates are our brothers, so I’m so happy we got to win as a team — even though I didn’t run, I’m so happy.”

The Rams were in second place, behind Lincoln, at the end of the second lap.

That’s when Neal got the baton, and he took off.

“It was good,” Neal said of his leg of the race. “I got the baton on the handoff, right after the first-place team, and I was right on his back until the 200-meter mark, and then I just passed him. I got to the handoff, me and Sherwood were there at the same time, and then Liam just took over.”

The Rams say they were confident that, when they got the baton to Shores, who won the 200 and the 400 earlier in the meet, they were on the way to victory.

“Liam is one of the best runners I’ve seen in my entire life,” Todd-Fields said. “No one is catching him.”

“Once we got it to Liam, we knew we were going to win,” Neal said.

“It’s special, man. This is a great team and a great organization,” Todd-Fields said. “It’s my first year running track, and this was just a lot of fun with the competition.”

“It was a good day today,” Simpson said with a smile.