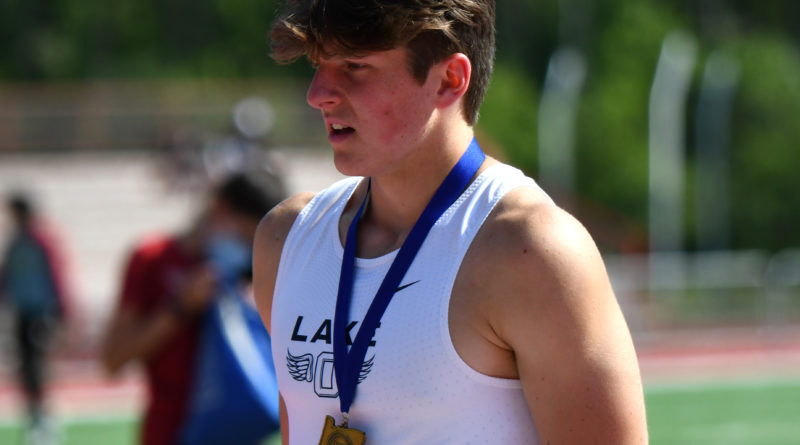 For Aaron Olson and Harrison Canfield, it’s been the goal all along.

Saturday, the Lake Oswego seniors reached that goal — and they were pretty happy about it.

Olson and Canfield, in that order, soared to first and second place in the boys pole vault competition at the Oregon 6A Track and Field Showcase, held at Pioneer Memorial Stadium in Oregon City.

“I’m kind of just excited right now,” Olson said after receiving his first-place medal. “That’s what our goal was, going one-two. One and two, from the beginning.”

“It was pretty good,” Canfield said. “I’m not happy with the height that I cleared, but it’s always been Aaron’s and my goal to get one and two at state, and I’m really happy about that. We both had a good season.”

It was a season during which the Lakers duo helped get each other ready for this final event.

“We push each other every day,” Olson said. “It’s competition, friendly competition.”

In the pole vault event, Olson and Canfield entered the competition when the bar was moved to 14 feet, 6 inches. At that point, only Summit junior Gavin Fleck remained.

Olson and Canfield cleared 14-6 on their first attempt at the height. Fleck got over on his second try.

At 15-0, Olson had a clearance on his first attempt. Canfield and Fleck missed on all three of their tries at 15-0, making Olson the champion.

“Like we keep saying, one and two, that was our goal.”

And, for the Lake Oswego seniors, it was a good way to go out.

“Not every meet goes as planned, but that’s OK,” Canfield said. “It’s a nice day, and we had fun. That’s what it’s all about.”