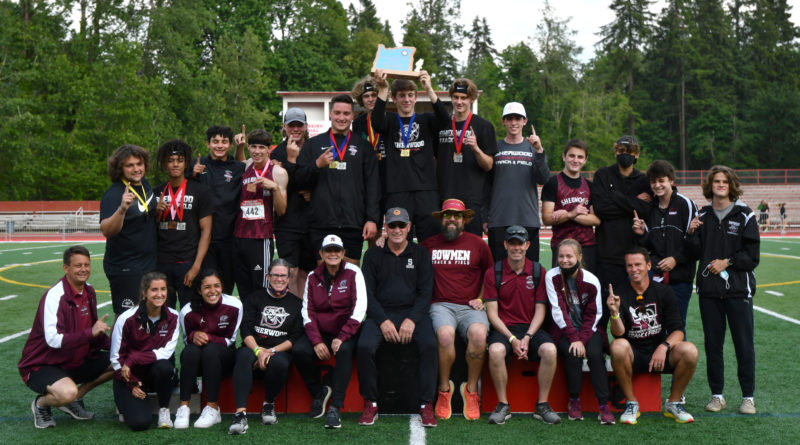 The disappointment is gone.

It was replaced by jubilation — total jubilation.

A year later than expected, the Sherwood boys track and field team has its long-awaited championship.

The Bowmen, who looked primed to claim the Class 6A state championship in 2020 before the season was canceled because of the COVID-19 pandemic, came storming back a year later to win the boys team championship at the Oregon 6A Track and Field Showcase, held May 21-22 at Pioneer Memorial Stadium in Oregon City.

“It means a lot, especially after last year,” said Sherwood senior Asher Krauel, who claimed a championship in the javelin event. “We were a virtual lock, you could say. We had (since-graduated sprinter) Caleb Hagan and Bryan (Cuthbertson), with his right arm. We knew it would be harder this year, but we knew we could do it.”

“It was disappointing,” Sherwood coach Terrel Smith said of last year’s lost season. “But the whole COVID thing is tough for society, in general, and sports is sports. But, for these kids, it was a very big deal. So, yes, we mourned the loss of opportunity, while, at the same time, keeping hope alive for what we could do when the time came, and it came today. It came at this meet, so we’re grateful. We’re grateful. We’re blessed to have this opportunity to showcase a group of great kids.”

“Not having this last year hurt really bad. It stung,” Krauel said. “It was definitely motivation for this year. I think everyone had this on their mind. We had to make this happen, especially for (Terrel) Smith.”

The Bowmen certainly found extra motivation in their quest to give Smith, who has been coaching at Sherwood since 1986, his first track and field championship.

“We’re really doing this for ‘Coach T,’” Sherwood junior distance runner Jeffery Rogers said. “He’s been here for years and years — he’s always been trying to get one. We’re pretty sure we would have won last year, so it’s great to come back here and get what we think we deserve.”

“It means a lot,” Sherwood senior Bryan Cuthbertson said. “It’s Coach’s first championship, so, to him especially, and to all of us, it’s such a pleasure to do it for the team, do it for the school and do it for the town of Sherwood.”

The Bowmen set the tone for their championship quest during the first day of competition at the meet. Krauel won the javelin with a school-record throw of 198 feet, 7 inches. Senior Noah Culbertson claimed gold in the shot put with a mark of 61-9. Other Sherwood competitors also stepped up in a big way that opening day.

Junior Davyon Sanders, who was seeded fourth in the high jump, cleared 6-2 to take second place. Rogers passed a runner right in front of the finish line to place fourth in the 3,000-meter run in a time of 8 minutes, 26.59 seconds.

“We knew coming into this meet that it was going to be close, and we needed every point we could get,” Rogers said. “Every point matters.”

Then there was Cuthbertson. The Bowmen senior, who placed second in the shot put and discus at the Class 6A state meet two years ago as a sophomore, suffered an injury to his right (throwing) elbow during football season. It looked like his track season might be over before it started. But Cuthbertson had different ideas.

“I had a lot of potential to score a lot of points if I was healthy, to place high in the throwing events, so coming out and hurting my elbow and not having a senior track season, like I wished, and all that I hoped for was gone, but I realized that I could still participate and contribute to the team and surprise some people,” Cuthbertson said. “It was great to do it, and it was fun.”

What Cuthbertson did was learn to throw the shot put left-handed. Throwing lefty at the showcase, he placed fourth with a throw of 49-2.5, adding five valuable points to the Bowmen’s team score.

Also for Sherwood on Friday, sophomore Austin Milton placed third in the javelin with a toss of 189-9.

But, entering the final event of the meet, the 4×400 relay, the Bowmen hadn’t clinched the title yet. To do so, they needed to score at least one point in the final relay.

“You couldn’t script it any better,” Smith said.

“Either we score a point there, or we tie for second,” Rogers said.

Well, the Bowmen relay team did better than just score a point. The combination of Sanders, Rogers, Verkamp and Sturdivant ran to second place in a school-record time of 3:23.78.

“It was just relief. The build-up, the stress — it was great to find out that we won,” Rogers said.

With the second-place finish, Sherwood finished the meet with a first-place score of 73 points. Ida B. Wells was second with a score of 60.

“We knew this was a special group when they came through as freshmen, that it would be a solid group that would take us places, and that’s what happened. Even with the COVID break, we were thinking, ‘How bad could it be?’ And it was really tough, but our kids trained through it, and this is their reward,” Smith said. “We can point to a number of things, and we had a bunch of school records at this meet. I don’t think I’ve ever experienced a meet where we had so many kids step up from the expectations we had. We expected to have a real close race with a couple of strong teams, but when it came down to it, the kids stepped up, exceeded expectations, and we’re just extremely proud of them. It was a great day.”

“Every single point matters and everyone fought for every point,” Krauel said.

“This was super fun,” Rogers said.

“It’s always worth it, with the outcome and the big team effort,” Cuthbertson said.

Central Catholic was third in the team standings with 52 points, and Newberg was fourth with a score of 43.