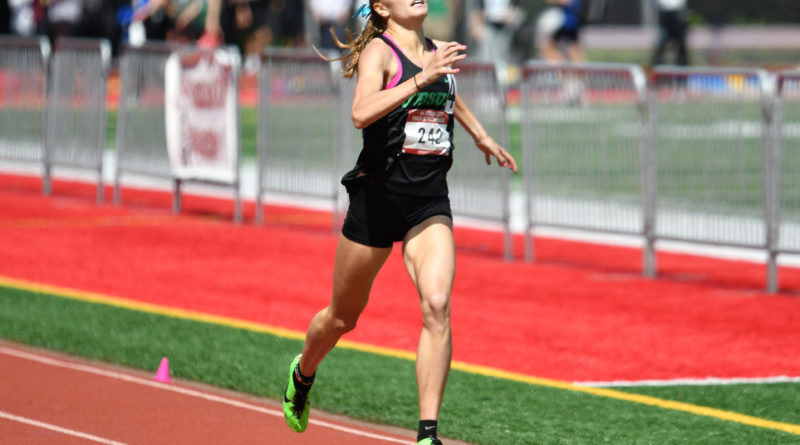 Chloe Foerster was grateful for the opportunity — very grateful.

She certainly made the most of it.

Foerster, a Jesuit junior, raced against a very talented field of competitors and came away victorious in the 800-meter run at the Oregon 6A Track and Field Showcase, held Saturday at Pioneer Memorial Stadium in Oregon City.

“It just means a lot that we were able to have a meet like this, and be able to run with competition, because we haven’t had a bunch of that this season,” Foerster said. “I’m just happy I was able to show up and reach some of my goals today, get my PR (personal record) and running with my friends, because this is my friends’ (Jesuit seniors Paige Grant and Molly Grant) last race as Jesuit runners.”

All three Crusaders runners seemed to step up during the race. Foerster held a slight lead at the midway point, with Summit junior Magdalene Williams and Molly Grant and Paige Grant close behind her.

“I felt pretty good,” Foerster said. “The first half was a little slower than I wanted it to be, but I just really tried to attack the third 200, because that’s where, before, I slowed down a little too much and just had to finish. My legs were weak at the end, for sure, but I was really happy.”

Foerster won the race in a remarkable, and personal-best, time of 2 minutes, 5.66 seconds.

“Seeing the time and chasing it down felt really good,” Foerster said. “That was a PR for me, by about two seconds. I think I’ve been getting a lot of good work in this past year, and finally being able to run again with some competitive girls was good. It was just a good day to show all my hard work.”

“This was super fun,” Foerster said.