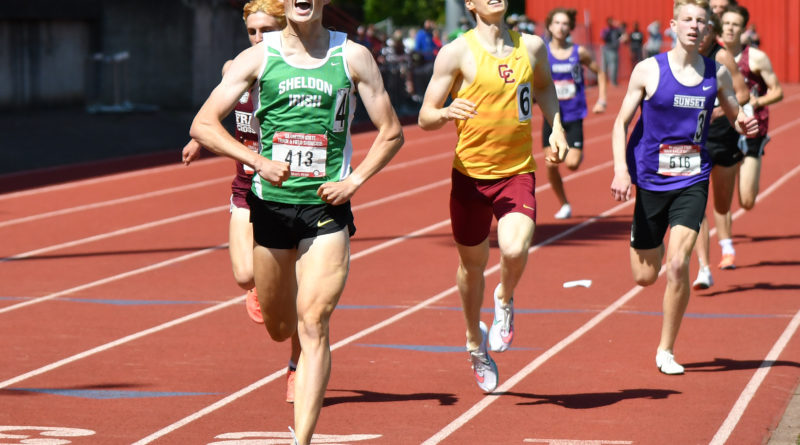 Usually in a race, speed rules.

But sometimes, slower is better.

A slower pace sure seemed to work out well for Vincent Mestler.

A slow early pace worked right into the Sheldon senior’s plans, setting up his strong finishing kick, as he ran to victory in the 800-meter run at the Oregon 6A Track and Field Showcase, held Saturday at Pioneer Memorial Stadium in Oregon City.

“Ah, it’s huge,” Mestler said of his victory. “I’ve been working for this for four years. I’ve been wanting this for a long time, so it really means a lot.”

In the 800 finals, the pace in the opening lap was somewhat slow, which was fine with Mestler, who was coming off a second-place finish in the 1,500 earlier in the day.

Franklin junior Charlie North held the lead midway through the race, with Mestler in third place. Central Catholic junior Julian Kingery took the lead with about 250 meters remaining. But as the race entered the homestretch, Mestler made his move.

“On the last lap, I had to turn it on. I didn’t care about time, I just wanted that first place,” Mestler said. “My coach told me that he wanted me to be the last guy to kick, so with about 110 left, I said, ‘It’s go time.’”

And go he did.

Mestler took the lead with about 90 meters left and never gave it up, winning the race in a time of 1 minute, 56.55 seconds.

“I was thrilled,” Mestler said of his feelings at the finish. “It was a lot of hard work to get here.”

After missing out last year, when the spring sports season was canceled because of the COVID-19 pandemic, this title means ever more to Mestler.

“It definitely makes it more special, especially after last year,” Mestler said. “Last year, I was hoping to get the title, so this year, we actually made a switch. Last year, I was 1,500-3,000. This is the first year training for the 800. I always had a good kick, so I figured I just as well try it out.”