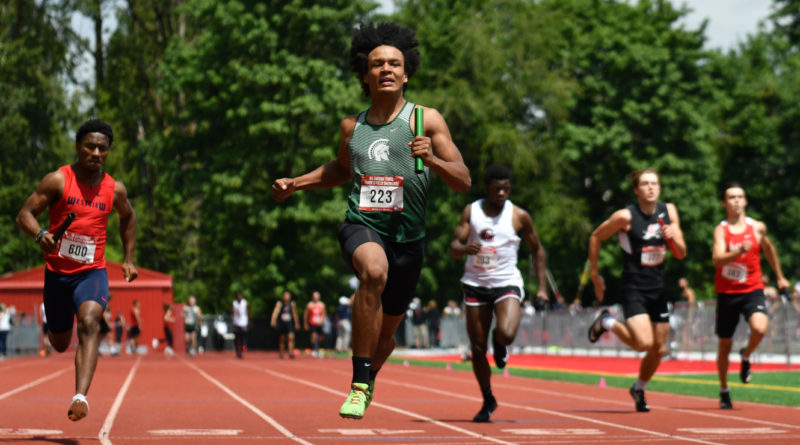 It’s said that timing is everything.

For the Ida B. Wells boys 4×100-meter relay team, the timing was absolutely perfect.

The Trojans’ team of junior Nolan Malcomson, senior Rolin Griffiths, senior Jayden Brannan and junior Koen Kuhn, looking to get under 43 seconds all season, reached that goal on its way to sprinting to victory at the Oregon 6A Track and Field Showcase on Saturday at Pioneer Memorial Stadium in Oregon City.

“This means a lot,” said Malcomson, who ran the leadoff leg for the Trojans in Saturday’s finals. “It’s both their (Brannan and Griffiths) last year, so it means a lot to run with them. We broke 43 seconds, which was our goal since the start of the season. It’s pretty amazing to finally do it.”

“We’ve been working for this all season,” said Kuhn, who ran the anchor leg. “It’s nice to get here, especially running with these guys.”

The Ida B. Wells squad won Saturday’s race in a time of 42.86 seconds, which bettered its previous season-best time of 43.08.

“It was just nice to see a PR (personal record),” Griffiths said. “We’ve overcome a lot. Koen’s brand new. He’s only run with us three times. It’s really nice to get that.”

“It means a lot to be able to showcase our skills at some sort of state meet, with COVID going on,” Brannan said. “I’m so proud of our team. Our team is really good this year.”

That team put things together at the right time.

“It was our mindset,” Brannan said of the key to getting a season-best time.

“It was the pressure, and the handoffs were great,” Griffiths said.