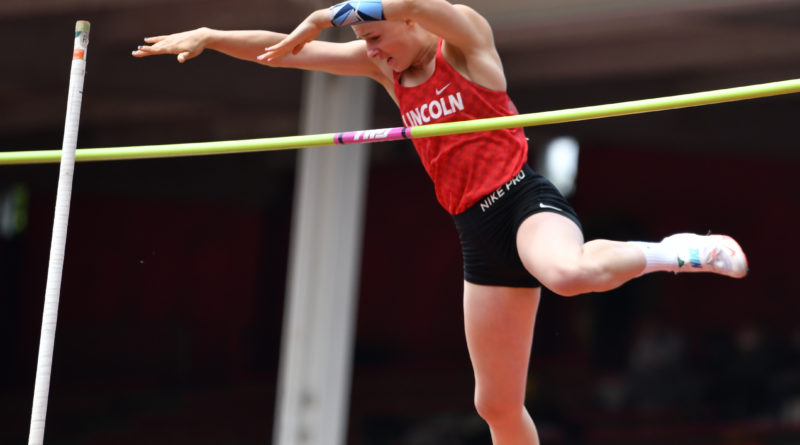 As it turned out, she didn’t need to be.

Prall, a Lincoln sophomore, shook off the nerves to turn in a school-record performance on her way to winning the girls pole vault competition at the Oregon 6A Track and Field Showcase, held Saturday at Pioneer Memorial Stadium in Oregon City.

“It means a lot,” Prall said after celebrating with her fellow pole-vaulters. “I’m really happy, even though some of my friends were having a bad day. I powered through. I was super nervous, but got over that.

“I mean, this is super huge. I’m a sophomore, and have two years to go, and I’m really happy. I’m thrilled.”

With the bar raised to 11 feet, 6 inches, Prall and Lake Oswego junior Katelyn Howard were the only competitors remaining. Prall soared over the bar on her first try at 11-6. Howard missed on her first try, and then passed.

With the bar at 11-9, Howard missed twice in a row, ending her stay in the event. Prall, for the second consecutive time, seemed to easily clear the bar.

“Those jumps were really nerve-racking,” Prall said of her vaults at 11-6 and 11-9. “Those ones were like — I just wanted to make it. I just had to get in the right mental state of mind, because I was just kind of out of it before that. They felt like they were almost just like warm-up jumps.”

Prall clinched the title with her mark of 11-9, but she wasn’t done yet. She asked for the bar to be moved to 12-1, which, if she cleared it, would give her a Lincoln school record.

Prall missed on her first two tries at 12-1 but got over the bar on her third, and final, attempt.

“That’s crazy. I’m really excited, and my coaches were thrilled,” Prall said. “I’m really happy, because they were really pushing me this year, and I’m glad they did. I just did the things that I needed to do. I was screaming with joy, I was so happy.

“It’s amazing to be able to do this in this crazy sport. There’s so many people that do it, and I love them all.”

Howard placed second in the pole vault at 11-6. Sunset junior Addy Braun was third at 11-0, and Central Catholic senior Penelope Allen was fourth at 10-6.