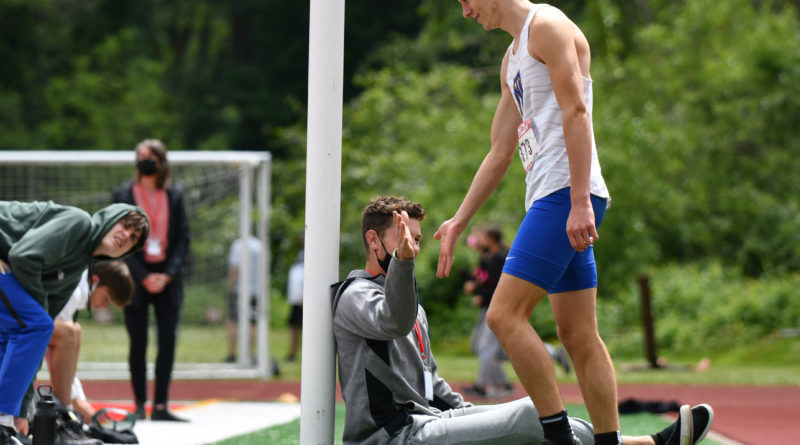 Blake Smith had been through all of this before.

On Friday, at the Oregon 6A Track and Field Showcase, the junior took the lead in the long jump competition, only to watch Newberg senior teammate Owen Hawley win the event on his final jump, edging Smith by a half inch.

Well, on Saturday at the Showcase, held at Pioneer Memorial Stadium in Oregon City, Smith took the lead on his fifth jump in the triple jump event. Then, he had to again watch Hawley try to take the title again on his final attempt.

“I was waiting for it. I was a little nervous,” Smith said. “I saw him jump, and it was close.”

It was … but this time, Smith got to celebrate.

Smith ended up winning the event with a mark of 43 feet, 7.75 inches, which came on his fifth (of six) jumps. Hawley placed second with his distance of 43-6.5, coming on his final attempt.

“It was good competition,” Smith said. “Yesterday was good motivation for today. He beat me by a half inch, and I wasn’t going to let it happen again.”

And, as Hawley said the day before, the competition between the Tigers teammates has been a good thing for both of them.

“It definitely helps that we push each other,” Smith said. “At a lot of meets there isn’t a lot of competition in the jumps. So, once I started pushing him, and beat him once, he started pushing me, and I moved up a little bit.”

Not only did Smith and Hawley finish one-two, albeit in a different order, for the second day in a row, but Newberg senior Dylan Stroup finished in fourth place in Saturday’s triple jump event with a mark of 42-9.25.

“That means that we’ve got a good coach, a really good coach,” Smith said.

Meanwhile, Smith is already looking ahead to his senior season.

“I’ve got another year, so I’m going for the school record. We’ll see how it goes,” Smith said. “I’ll see if I can win state in the long jump, instead of losing by half an inch. But he earned it, and I enjoyed it.”

Jesuit senior Ben Day finished in third place in the triple jump with a mark of 43-3.